In January, David Soknacki became the first of the major candidates to officially put his name forward to replace Rob Ford, a decision that in itself marked a change of heart. Eight years earlier, the popular small-"c" conservative and acclaimed budget chief quit municipal politics to devote more time to his herb and spice business. "I'm not the type of person that would pick up my marbles and go home," he told the Toronto Star, denying the departure was acrimonious.

The "eternal optimist," as he has been called, became involved in politics in the early 1990s during a neighbourhood dispute over a park at Markham Rd. and Lawrence Ave. Plans to install new lighting and additional baseball diamonds without public consultation didn't sit well with the some members of the community, leading Soknacki to form the Densgrove Park Community Association.

In office, Soknacki championed the appointment of Dennis Lee as the city's first poet laureate, successfully stopped councillors employing their own family members, suggested contracting our certain city services, and in 2000 voted in favour of making a bid for the 2008 Olympics. Later, he was in charge of the city's $6.5 billion budget during David Miller's first term as mayor.

The fiscal conservative, known this election period for his thoughtful, info-heavy, and "geeky" policy papers, isn't scared of sticking to his guns, it appears. "Will there be tough decisions? Of course. But you have them in life, don't you," he said in 2004 shortly after becoming budget chief.

He can read and write in Egyptian hieroglyphs

According to Supriya Dwivedi, Soknacki's press secretary, the mayoral candidate learned how to read and write in ancient Egyptian symbols during his undergraduate studies at the University of Toronto. "He took a couple of Near Eastern studies classes during his undergrad and picked it up," she says. The use of hieroglyphs peaked in ancient Egypt around the 7th century BC.

The first mention of David Soknacki's name in the newspaper archives appears in a TV guide from 1985. Before becoming a councillor, Soknacki presented a late-night program on called "At Your Service" on Metro Cable, a Toronto local access station. He describes it as "sort of like LeDrew's show on CP24, without the bow tie."

During his first term, Soknacki--"a good natured Boy Scout," according to The Star--was applauded for successfully banning councillors from hiring their own family members as office assistants. During this time, he was praised for spending just $6,294, all of it paid out-of-pocket. He was later criticized by The Star for paying $1,500 to an executive headhunting firm in the search for an executive assistant. He eventually hired Paul Ainslie, now a city councillor himself, who had recently quit Cllr. Ron Moeser's office. 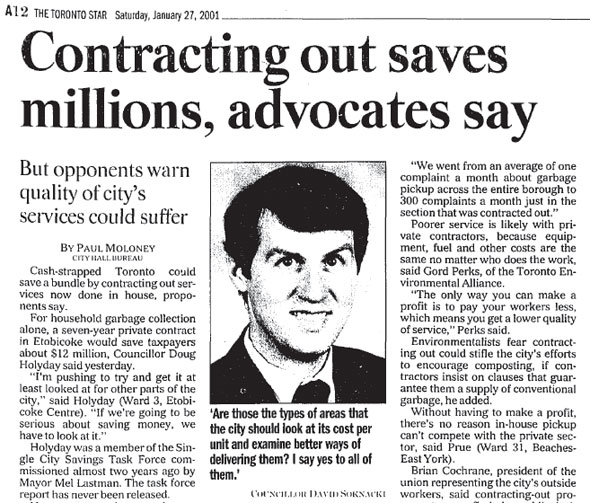 Despite voting for John Tory in 2003, new mayor David Miller appointed Soknacki as chair of the city's budget committee, a promotion from his deputy role under Mel Lastman. Facing a $344 million shortfall, fellow councillor Brian Ashton likened the challenge of balancing the city's books to "asking a bank manager to take over during a robbery." Soknacki and Miller delivered consecutive 3 percent property tax increases, though as The Star notes, "Soknacki would have preferred to hold the line at zero."

Not all retirements stick. Soknacki quit politics in 2006, saying he wanted to devote more time to his herb and spice company, Ecom Food Industries. Soknacki founded the business in 1986 after selling bulk batches of mustard seed for a British trading company. "I was such a dreadful employee, I had to start my own business," he told The Star in 2004. Soknacki denied rumours his decision not to seek re-election was due to a conflict with David Miller.

Next week: 5 things you didn't know about Karen Stintz