Toronto is home to an impressive population of urban explorers who use Instagram as a creative outlet. From rooftoppers to underground adventurers, these photographers capture parts of Toronto that most of us don't have access to, and it's intriguing to see these novel views of the city appear in one's daily feed.

roof_topper
As his Instagram handle suggests, this thrill-seeker is all about shooting from on high. Despite having only recently adopted the square format photo sharing platform, his images have amassed over 7,000 followers and can be both mesmerizing or nauseating depending your perspective. He also throws in the occasional stunning travel shot from ground level.

freaktography
Freaktography's feed features a wide variety of urban exploration (and even some rural sites), with a strong focus on abandoned buildings. There's a pervasive sense of nostalgia in most of these images, which is broken up with some rooftopping shots.

javin_lau
Javin Lau shoots skylines and streetscapes with interesting off-the-cuff compositions. Setting himself apart from his peers, his photos capture urban landscapes with muted slightly diluted colours that have a gritty appeal. 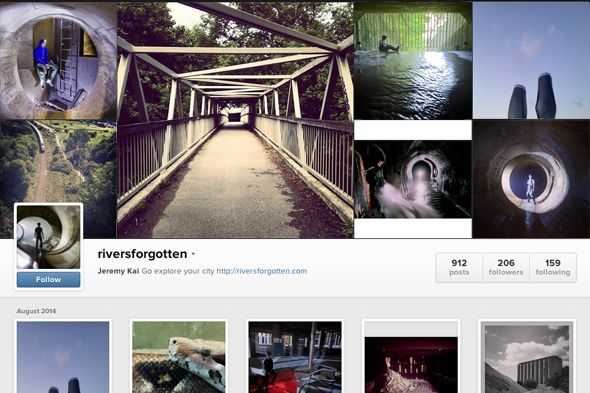 riversforgotten
Venturing deep into the city's underbelly, Jeremy Kai has been documenting Toronto's underground waterways well before Instagram was a thing. His photo stream is nicely varied, featuring abandoned buildings, architectural wonders and other oddities.

iambidong
Neil Ta showed work at the Toronto Outdoor Art Exhibition this year, showcasing his rooftopping work, which at times make Toronto's topography look abstract. One of the most active local shooters around.

416Shots
Toronto has a surreal neon glow through this photographer's lens. Follow his Instagram account to see him bound from rooftop to rooftop and capture skylines from every possible vantage point. 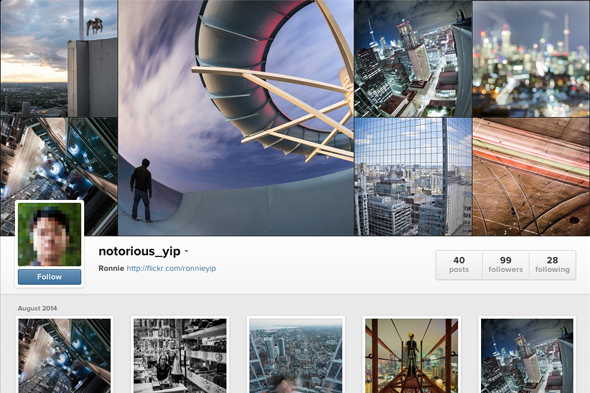 notorious_yip
Ronnie Yip captures Toronto from atop construction cranes and from off limit locales like the abandoned water slides at Ontario Place. He has a keen eye for making Toronto seem even denser than it already is.

ori.ginals
On top of the world. Literally. You'll find ori.ginals documenting his fearless antics as he dangles off the edge of skyscrapers and watches over the city from a bird's eye perspective. 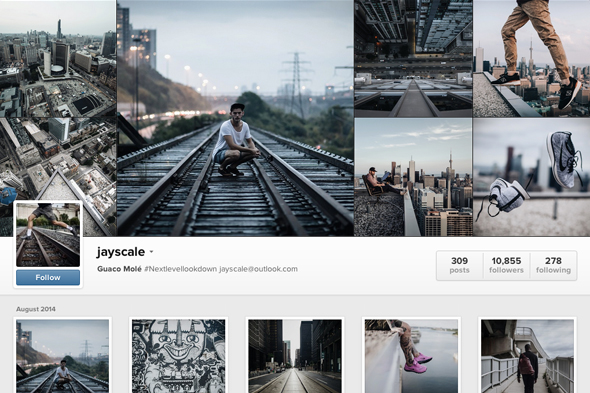 jayscale
Finding beauty in urban settings, jayscale's feed showcases the city at every angle. See the city from towering heights or catch a glimpse of sky looking up through skyscrapers from street level.

tharobong
Vee masks add an air of mystery and sense of mischievousness to this collection of photos. Tharobong's Instagram account dates back to only earlier this year, and is especially filled with shots of smoke, steam and fog.

goldvisual
Goldvisual focused on Toronto's architecture, with a penchant for shooting archways, tunnels and bridges. 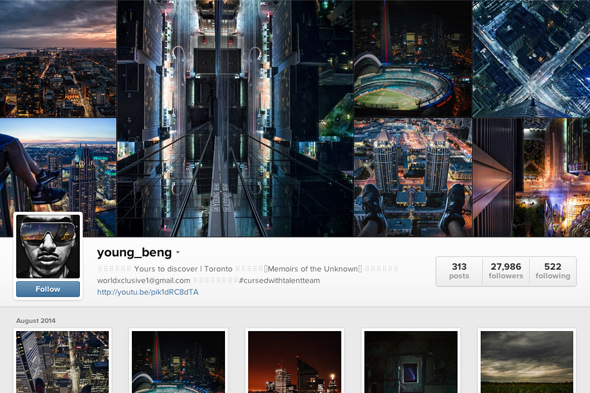 phantamos
Phantamos loves to shoot Toronto as it glimmers at night, including the occasional strike of lightning. His feed features favourite landmarks from unusual angles and backlit silhouettes in front of vast skylines.

So who have I missed? There's got to be lots of great photographers to suggest in the comments below, so please do!