The former Kromer Radio building at Bathurst and Nassau streets has been vacant for close to two years, its brilliant electric blue sign disconnected and parking lot surrounded by a chain link fence. The property, now owned by developer RioCan, was a target for a controversial big box store, with Walmart identified as a prospective tenant.

The concept was roundly criticized in the neighbouring Kensington Market neighbourhood for its size--8,800 square metres over two floors for the anchor tenant--and more than 300 underground parking spaces.

RioCan fought for its proposal at the city's committee of adjustment, a citizen panel that rules on minor zoning variances, and the Ontario Municipal Board, a provincial body with jurisdiction over the city's own planning department, with little success. 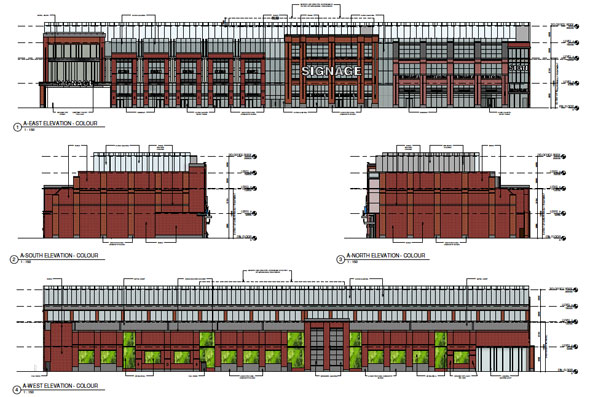 In February, local councillors Adam Vaughan and Mike Layton managed to brokered a compromise that reduced the building in size, cut the amount of retail space, and included a number of other nods to the neighbourhood, including a decorative rear wall, laneway access, and sidewalk improvements. As a result, RioCan said it would allow Walmart to "walk away" from the store.

The amount of retail space was reduced to 6,622 square metres and over roughly 10 stores. The four-storey building will also contain 6,502 square metres of office and (slightly) fewer parking spaces.

The scaled down plan was approved by city council in March and city staff are currently working grant the building site plan approval. Depending on RioCan's plans, construction could start before the end of the year.

Are you pleased with the compromise that's been reached on Bathurst Street?