What should the new Dufferin Street park look like?

Dufferin Street is getting a new park, but the city is still deciding what it will look like. At the latest meeting of the Toronto Design Review Panel, a group of industry architects, urban designers, and engineers who provide advice to city staff on matters of aesthetics, there was little consensus about what the small green space northeast of the underpass should look like.

The scrubby patch of former industrial land at the southeast corner of Dufferin and Peel, which last saw use as a staging area during construction of the new rail underpass, could link directly to an extended West Toronto Railpath and provide a useful counterpoint to the Dufferin Amphitheatre, located on the other side of the tracks. 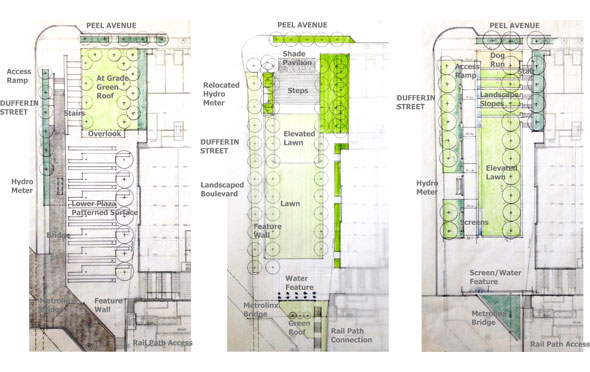 So far, landscape architects have produced three rough "vignettes" for the unnamed park, which are pictured above.

The panel didn't like the idea of building a shield against Dufferin traffic noise (one of the ideas,) nor did they like the idea of a landscaped roof, because it would make the park feel like a "privatized zone." The concept that appeared to win the most approval imagined a series of landscaped slopes at the north end of the park.

The Carnaby Condos, the new building on the eastern edge of the rectangular lot, which may be under construction without site plan approval, is also an important part of the puzzle, the panel says. During discussions, the group decided the ground floor part of the building that faces the park should be a coffee shop or public art space.

What do you think the new park should include? 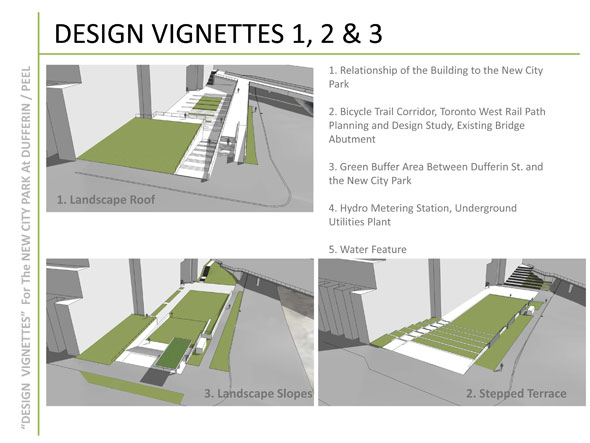