John Tory got his start in politics while a student at University of Toronto Schools, a prep school affiliated with the university, when a friend convinced him to buy a $1 membership to the York Mills Young Progressive Conservatives Association.

"It sounded like an interesting thing to do. He made it a story with a little intrigue. He made it all sound very exciting. If I bought a card, I could vote for this friend of his who was running for treasurer against this other fellow who was somehow bad news," he told The Star in 1983.

Here are five things you may not know about Mayor John Tory. 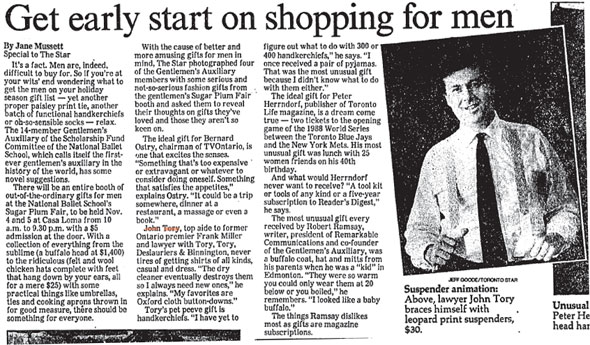 He liked leopard print suspenders
For a 1987 Toronto Star fashion feature, John Tory revealed his favourite fashion gifts--Oxford cloth button-down shirts--and was photographed in a pair of $30 leopard print suspenders. Handkerchiefs were Tory's least favourite: "I have yet to figure out what to do with 300 or 400 handkerchiefs," he said. "I once received a pair of pyjamas. That was the most unusual gift because I don't know what to do with them either."

He's the fourth John Tory in an unbroken line of five
John Tory's great-grandfather, grandfather, and father were all called John Tory, and so is his son. Our John Tory's father co-founded the law firm Tory, Tory, Deslauriers and Binnington--one of the largest in Canada--and later became the president of Thomson Enterprises, the media company founded by Roy Thomson, now known as Thomson Reuters. Tory became a partner in the firm in 1981 when his father joined Thomson.

Was a key piece of the Progressive Conservative "Big Blue Machine" of the 1980s
In the 1981, the Ontario Progressive Conservative Party had been in charge of the province close to four decades. That year, a 27-year-old Tory became executive assistant to premier William Davis, and later his de-facto spokesman. A 1982 Toronto Star profile called Tory a "workaholic whizz-kid." Davis quit in 1985, triggering the leadership race that left Frank Miller briefly in charge of Ontario. A Liberal-NDP coalition under premier David Peterson took over later that year.

He was once in charge of the corporation that redeveloped the Toronto harbourfront
Following the ousting of the Ontario PC party in 1985, Tory was appointed director of Harbourfront Corp., the crown agency tasked with redeveloping the city's waterfront along Queens Quay. He remained on the board during the controversial construction of several high-rise buildings within the corporation's one-mile area of focus. He left the position in the early 1990s and later become co-chair of Brian Mulroney's re-election campaign.

His election attack ads backfired spectacularly in 1993
When Brian Mulroney quit as Progressive Conservative leader in 1993, Kim Campbell took over as Prime Minister. As a result, Tory, who had previously worked with Mulroney, took responsibility for Campbell's election campaign that same year, crafting a series of attack ads that appeared to focus on Liberal opponent Jean ChrĂŠtien's facial paralysis to widespread criticism.

"He's the campaign manager, so he had final approval of the ads. As the person responsible he should turn in his resignation," said Hamilton-Wentworth Progressive Conservative candidate Ray Johnson at the time. Campbell and the federal PCs were obliterated in the election, losing all but two of the party's 156 seats.

He narrowly lost out to David Miller for Mayor of Toronto in 2003
Following stints as the CEO of Rogers Communications, Chairman of the Canadian Football League, and high-level positions with the St. Michael's Hospital Foundation, United Way, and Mel Lastman election campaigns, Tory ran against David Miller in the 2003 mayoral election, eventually losing by about 35,000 votes or 5 percentage points. Following the defeat, Tory became leader of the Ontario PC party and later the chair of the Greater Toronto CivicAction Alliance.