The 2014 Ontario provincial election results show that Kathleen Wynne's Liberals have taken a majority government. Polls were all over the place leading up to the election, so it was at least something of a surprise to witness how quickly a majority was declared. Although a few ridings are still up in the air (it remains particularly close in Beaches - East York as I write this), the picture as it stands now breaks down like this:

Kathleen Wynne becomes both the first woman and openly gay candidate to be elected the premier of Ontario. In that sense, the victory is historic -- all the more so because neither of these things seemed to be an election issue. In the wake of the Liberal triumph, PC leader Tim Hudak stepped down, though he will stay on as MPP for Niagara West - Glanbrook. He promised to do as much in debates leading up to the election, so the decision is hardly a shock. 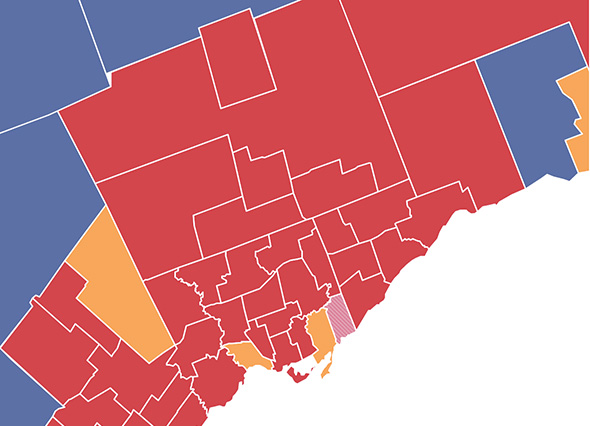 From a Toronto perspective, the region is a sea of red. With the exception of Toronto Danforth and Parkdale - High Park, the city elected Liberal Candidates. Even Trinity Spadina, long an NDP stronghold with Rosario Marchese, went to the Liberals under the candidacy of Han Dong. Etobicoke - Lakeshore, the sole PC riding heading into the election, also went to the Liberals, with Peter Milczyn edging out Doug Holyday.

It's difficult to say exactly what a Liberal Majority will mean for Toronto in the long term, but Kathleen Wynne was quick to emphasize her commitment to the expansion of transit infrastructure in her acceptance speech, an issue that is crucial to this city's future well being. $15 billion over 10 years might not be enough to address the GTHA's transportation problems, but plans like the electrification of GO rail lines are good news for Toronto.

It also doesn't hurt that this Liberal victory was built on the back of GTA voters, who made their allegiance plain to see. Hopefully the party will reward that loyalty over the next four years.

For a riding-by-riding breakdown of the results, check out this handy map from the Canadian Press.