Will TTC subways ever run really late into the night?

Politicians and journalists do much squabbling over whether Toronto is a so called world class city. Whether we are or we aren't, it's tough to argue that our subway service doesn't measure up to what's offered by cities that indisputably carry that title.

New York City, for example, keeps its subway lines open all night. And in London, five lines will remain open overnight on Friday and Saturday nights, beginning in 2015.

Could something similar ever work in Toronto?

"The reason we don't stay open later is quite simple: it's maintenance," he says. I ask him why is then that whole chunks of some lines are routinely shut down over on weekends. He says those closures aren't for routine maintenance; they're for major upgrades. Daily maintenance takes place from the time the subway closes, at 1:30 a.m., and opens again at 6 a.m.

For a city that ranks consistently at the top of the list of priciest transit cities in North America, a subway closure time that falls half an hour before last call makes me feel a little irate. But Ross says our comparatively early closure time is a function of our system's infrastructure.

Subways in New York and London, of course, require maintenance as well, but they have alternate capacity available to them. Lines in London, for instance, run "both fairly close to one another and parallel," Ross says, allowing some lines to close for maintenance while proximate ones remain open for service. And similarly, in New York, there are parallel express tracks, allowing one track to close while the other one continues to run.

As New York's MTA late night service map shows, the subway operates 24 hours per day, though not all lines operate at all times. All stations are served during late night service, though, which runs from midnight until 6 a.m.

Closer to home, Ross says the daily maintenance required is crucial. Workers have to look at whether the tracks are in good condition, ensure switches are working and signals maintained, and make sure that the tracks are free of ice and debris.

"We only have three hours, but we get a lot done in those three hours," he explains. Though more maintenance time is required right now to do signal upgrades, he says a later closure isn't completely off the table for the future. 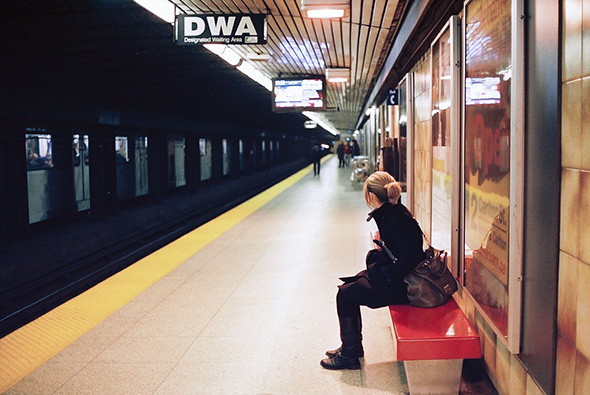 "It's absolutely possible, in the future, once we're in a state of good repair, to be open until 4 a.m. on a Friday or Saturday night," he says. Once the system is "operating at a high degree of reliability" and in the event that platform-edge doors are installed, the TTC will have that discussion.

Platform-edge doors are those which you might see in airport monorails, which slide open and closed from the platform itself, rather than having the platform open to the tracks. They keep people from falling onto the tracks, and they also keep the tracks cleaner, preventing newspapers and other garbage from flying on to them. Cleaner tracks mean less maintenance time required, which means the subway could easily stay open later.

Ross says the doors are identified in the TTC's budget as a future priority, but as yet, they're not at the top of the list, and they remain unfunded. Development of a Downtown Relief Line (yeah, that magical thing to dream about) could also make a later closure feasible.

As for all-night service?

"24 hour or later service is just not something that we can consider at this time," Ross admits. "I don't think we'll ever see 24 hour service. It's not warranted." Those of us who like to party, he says, and those who work shift work or odd hours, can always make use of the Blue Night bus, which generally runs along the subway lines and other key transit arteries.

A total of 183,780 Torontonians worked in accommodation or food and beverage in 2013, and I'm sure they would say later service is deeply warranted. As would the thousands of students in the city. Still, this is Toronto -- and this luxury talk. Ross tells me that though internal discussions are had from time to time about staying open later on weekends, no serious talks on the topic have been had recently, and major improvements need to be made to our existing system before we can extend its hours even just until last call.

Photos by Daniel Gueorguiev and tapesonthefloor.