Tim Hudak shows how not to do a TTC photo op

Ontario PC leaser Tim Hudak and his handlers must have thought it was a pretty good idea to announce his promise to build a new subway by riding the TTC rails like an everyman. What escaped the PC team, however, was the foresight to secure a permit or to get permission from the TTC, which has rules that restrict campaign events on its property. And that failure led to one marvellously awkward encounter yesterday morning, as transit officers put a stop to the impromptu photo op. The whole thing also caused a minor subway delay, which didn't exactly ingratiate Hudak to his fellow passengers. 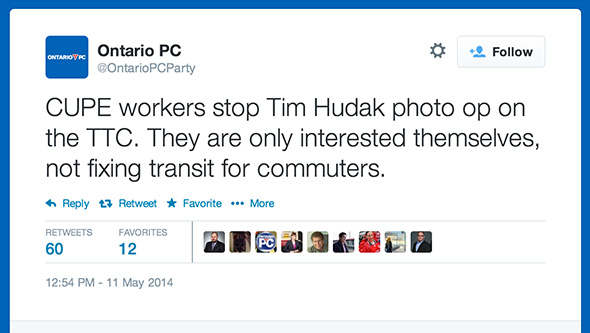 How exactly the officers knew where to find Hudak and his team is unknown, though the PC's claim that the incident was an example of CUPE interference. It's all rather dramatic, but the video itself is Curb Your Enthusiasm cringeworthy for the way that Doug Holyday does everything he can to stay off camera while Hudak wears a politician's perma-smile in the background.