I've always loved Concorde. I had a poster of the jet with its paper-thin wings plastered above my bed when I was five years old, and I was obsessed with trying to catch a glimpse of its swan-like body in flight from the window of my parents' car (I grew up near Heathrow Airport in London, so it actually happened once or twice.)

Although Concorde never visited Toronto as regularly as it did London, New York or Paris, in 1979, the city provided the backdrop for the first public air show appearance by the billion dollar Anglo-French aviation project. For nine tantalizing minutes one late-summer afternoon, the entire city tried to catch a glimpse of the machine that made supersonic passenger travel a reality. 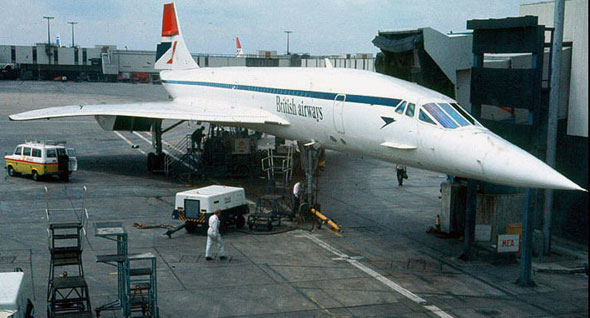 Concorde first came to Toronto and the CNE three years after the plane first entered commercial service. It was the first time one of the jets, the product of a joint venture between the British and French governments several decades and billions of dollars in the making, had put on a display outside of a trade show.

The first Concorde prototype, number 001, first flew in southern France on March 2, 1969. Eager onlookers crowded rooftops and lined the air strip in Toulouse as the impossibly delicate looking delta-winged plane accelerated into the air, producing a deafening roar from its four Olympus engines. BBC television in the United Kingdom covered the event live.

The iconic plane was developed in response to the planned Boeing 2707, a supersonic jetliner being cultivated in America. More than 100 Concordes were ordered by the major carriers of the day, including Pan Am, BOAC, American Airlines, Qantas, and Air Canada, which requested four. During development, the price of oil began to steadily climb, and the low-capacity jet with its propensity to guzzle fuel began to look like a less attractive investment.

One-by-one, the airlines cancelled their orders, until only British Airways and Air France remained. Air Canada officially backed out in June 1972. In the end, just 20 Concordes were built, including six prototypes. The 14 that remained were split evenly between the two airlines. Each one cost the equivalent of $222 million Canadian (2014,) twice as much as other airliners that could seat more people.

The Boeing 2707, Concorde's main rival, was cancelled in 1972 without a working prototype. 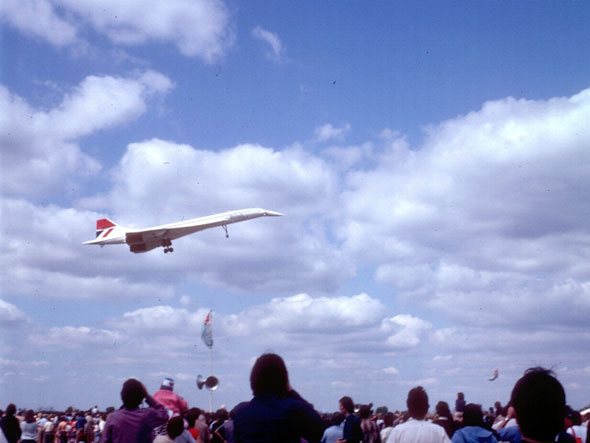 Even by today's standards, Concorde was unbelievably fast. Over the open ocean, where it was permitted to accelerate to full speed, the plane could reach 2,140 km/h, more than twice the speed of sound. Modern airliners travel at less than half that. A trip from New York's John F. Kennedy to London Heathrow took about 3.5 hours.

In 1979, the British Airways liveried Concorde that visited Toronto became an instant local sensation. Thousands of Metro residents crowded Malton airport to catch a glimpse of the plane, packing out the parking lot and jamming local streets. Police ticketed abandoned cars on the side of the highway and urged motorists circling the field ahead of take-off to go home lest they delay actual passengers.

"Every parking space was taken. There were people and cars everywhere," British Airways' John Dawe told the Star. Only about 600 people were able to file through the cabin before the plane was scheduled to depart for its CNE appearance.

For nine minutes, Concorde, with its distinctive nose pointed downward, made four slow passes along the lake shore. At the controls, Capt. Brian Walpole put the plane through several banks and turns to show off its agility and slender profile. "It's one hell of a plane," said John Davidson, who was watching from the bleachers at the Ex. "Now I just wish I could afford to fly on it some day."

Concorde became a regular fixture at the CNE air show, appearing every year from 1979 to 1987. In 1981, legendary Toronto Star photographer Boris Spremo was on board as it made its traditional flypast. Unfortunately, the extreme forces produced by a tight banked turn floated the camera from his hands at the crucial moment. "It's one of the few occasions our prize-winning photographer came back without the picture," wrote columnist Frank Jones.

In 1982, the newspaper offered a pair of supersonic London-New York tickets to the person who could snap the best picture of Concorde with the city in the background. The photo would be used by British Airways to promote a proposed regular supersonic operation between Toronto and London, a prospect that unnerved homeowners near the airport but didn't become a real threat until eight years later.

"They [Pearson] don't give a damn about the people who live here," said Deborah Boots, vice-president of the local Council of Concerned Residents, in 1990. "This is a bloody noisy aircraft and there will be some concern about that," Chern Heed, the airport's general manager, told the Star. 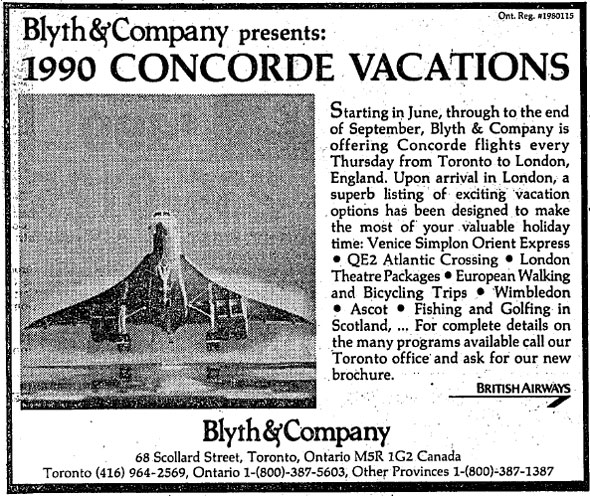 A regular scheduled service never fully materialized, however. At its peak, Concorde charter flights were operated out of Toronto once a week by luxury Canadian tour agents Blyth & Co. and later Nordic Tours. It took about 4.5 hours to make the trip to London, less with a tailwind. On several occasions, Toronto's airport was the start and finish for sight-seeing tours over the Arctic Circle.

Even flying on Concorde out of New York, a regular hub, was prohibitively expensive. The plane had only 100 seats, all of which were first class. Although there was no in-flight entertainment and no telephone, passengers were kept busy with champagne, caviar, patĂŠ de fois gras, and filet steak served on real ceramic plates with metal cutlery.

Inside the narrow curved cabin, there were just 25 rows with two seats on either side of a central aisle. A "Machmeter" on the wall near the cockpit displayed the ground speed relative to the speed of sound. It read "M 2.02" - Mach 2.02 - as the cabin, so noisy from the sound of the afterburners that cockpit announcements were drowned out, reached its cruising speed.

It was the sound of the engines and fears over emissions that led many cities to balk at the prospect of regular visits. With the engines running at full power, Concorde made an ear-splitting din during take-off. There were also concerns that allowing the plane to break the sound barrier over land would shatter windows on the ground.

Despite the rising cost of fuel and limited service options, Concorde appeared to remain a profitable enterprise for British Airways and Air France. Fewer flying hours meant the plane aged slower and in the mid-1990s, both airlines expected to continue flying beyond 2010.

The catastrophic crash outside Paris in 2000 and industry turbulence following 9/11 finally put the kibosh on the plane. The dream of routine supersonic flight ended in smoke and ashes a little over 30 years after it began.

"The Concorde was special," said British MP Tony Benn, the country's minister of technology during development of the jet. "The quality of the work, the minds, the skill, the talent, the commitment that went into it, that's what really matters."

"It's the most brilliant example of far-sighted designers [who] thought ahead and kept a lead for half a century," he said.

English journalist Sir David Frost, a regular Concorde passenger famous for his series of interviews with U.S. president Richard Nixon that formed the basis for the movie Frost/Nixon, thought highly of the plane's aesthetics.

"There's the view of New York from the Triborough Bridge, there's the Sydney Opera House, and then there's Concorde," he said. "Arguably the three most beautiful man-made sights in the world."