That night the Queen City fell into the Toronto Bay

In all their years sailing the open water of Lake Ontario, the members of the Queen City Yacht Club never expected their headquarters would be the thing to sink. The three-storey wooden building, designed by renowned Toronto architect and club member E. J. Lennox (his best work includes Old City Hall and Casa Loma), had been a fixture at the foot of York Street for close to 20 years when the city began to grow around it.

The original shoreline of the lake ran along the south side of Front Street, but the shallow water wasn't much good for commercial shipping compared with the port at Montreal. Starting in the late 1800s, the city began infilling - depositing sand and other debris into the water to create new land - and dredging new deeper ports capable of berthing ocean-going ships. 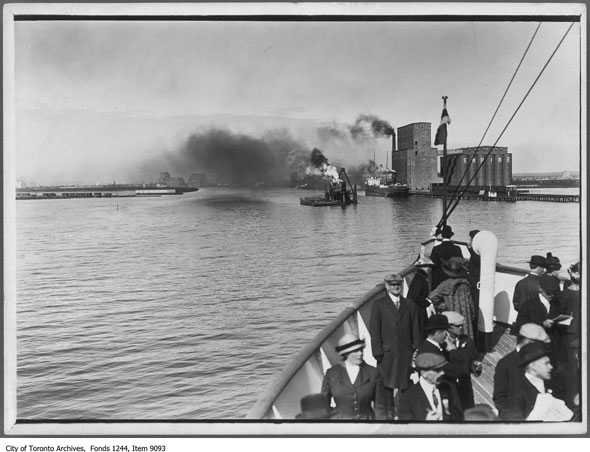 The activity was relentless. As the shoreline inched out into the lake, the Queen City Yacht Club, located midway along wharf No. 17, a timber dock with views of two giant freight sheds at Harbour Square, found itself moving further inland.

The club, famous for its dance parties, dinners, and annual season-end balls, competed in practically every size class at events across the province. It had dozens of boats, many of them between 15 and 22 feet long. They had names like Widgeon, Enid, Spray, Do-do, Caprice, and Roxane.

At the end of the night, when the revellers walked to the streetcar on Front Street, they did so through an increasingly industrial neighbourhood.

In the spring of 1920, the city was in the process of dredging new deep-water ports between Bay and John streets and packing the remaining space with infill. The Globe and Mail carried a report of boat houses marooned inland, a fate that soon awaited the Queen City Yacht Club.

"Seven huge dredges are operating in that locality transforming a large stretch of water into a long level area of sand," it wrote. "The boat houses formerly bordering on the water are now at some places some four hundred feet inland, and are separated from the water by that section of the harbour reclamation on which Fleet Street and Queen's docks are proposed." 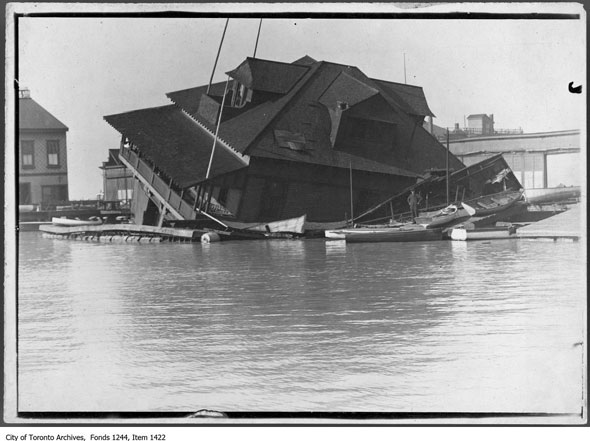 A few months later, dredging had begun to the east of the wharf the club shared with the Argonaut Rowing Club and, nervous at the impending loss of space, Queen City management had found a new location on Sunfish (now Algonquin) Island.

It was a good thing, too. The writing was on the wall for the club. Reclamation work by the Toronto Harbour Commission had eliminated water access to all but the smallest craft and giant dredges were hauling muck and silt right on the doorstep.

Then, in the early hours of July 7, 1920: a thunderous crash and shouts for help. Tugs in the harbour and boats from a nearby lifesaving station squeezed through the narrow access channel to find the Queen City building partially collapsed, its southeast corner submerged and the rest at a 45-degree angle.

The club steward - "E. Simpkins" according to the Star, "C. M. Henney" to the Globe - who lived on the upper floors with his family, had crawled out a window onto the roof.

There had been signs of trouble for some weeks, though the cause of the incident is still a matter of debate. The yacht club blames the dredgers for undermining the foundation, while the harbour commission says rotten wood caused the collapse. Either way, weeks earlier, the building had started to settle, and the club's piano and extensive collection of trophies were removed for safe keeping.

Luckily, when the supports finally gave way, the steward's family were away visiting friends and the caretaker was plucked from his precarious perch without injury. 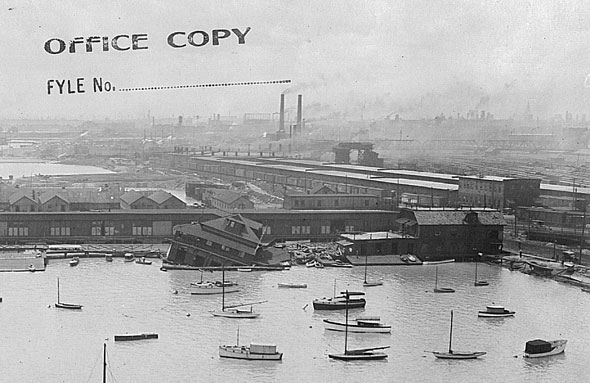 With the Queen City club house in the drink, the neighbours grew nervous. The wooden building supported several nearby structures that had also noticeably settled. The Globe said they were all in danger of collapse.

Luckily, though the QCYC building continued to sink, no other buildings on the wharf met the same watery fate. The Argonaut Rowing Club built a temporary pontoon around the wreck that allowed its members to get to their boats and what remained of Lennox's house was demolished that fall.

The club, which is celebrating its 125th anniversary this year, today sits happily on dry ground on the Toronto Island.

Heritage Toronto is due to unveil a plaque commemorating the club's history on June 7 at Ward's Island Ferry Dock.