Now you can play Cards Against (Toronto) Real Estate

Cards Against ________ is quickly becoming a fad in Toronto. Building off the now iconic design of the original game, local companies are tailoring the content to our city -- and, most recently, to our real estate market. In the wake of Scotty Graham's Cards About Toronto, we now have BuzzBuzzHome's playful attack on local real estate cliches.

Designed by 88 Creative, the slender deck will immediately look familiar to fans of Cards Against Humanity. Just how funny the game is probably depends on how interested you are in the housing/condo market. While not all jargon, it's definitely targeted toward development nerds (there's even a pot shot at Urban Toronto in there). 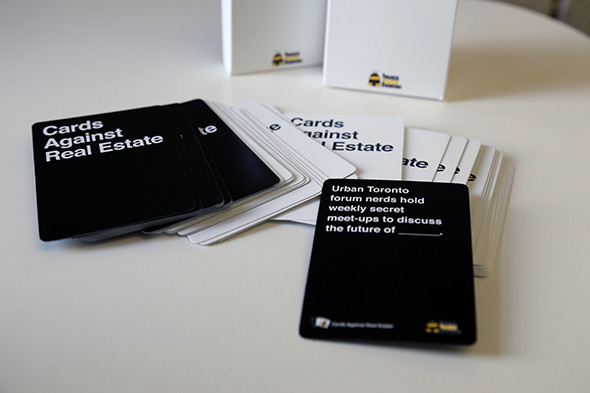 If you're stuck renting a basement bachelor on minimum wage, the potential humour will just be irksome. Case in point, a black card that reads: "Forget infinity pools, this year's hottest condo amenity is _______!" On the bright side, if you're lucky enough to have the white card that reads "Dog shit in the hallway," maybe there's hope after all.

The cards aren't currently available for retail sale, but if you pester BuzzBuzzhome enough, they'd probably give you a set.

Correction: In a previous version of this post, we referred to Scotty Graham's set as Cards Against Toronto when they are in fact called Cards About Toronto.