Why did Bright Street get so bent?

Number 32 Bright Street is a non-conformist. The squat little bungalow sits sandwiched between two bay-and-gable Victorian terraces, angled to face a street that moved in the early 1860s. It's a relic of the very earliest days of the street and old Corktown.

In its first incarnation, Bright Street, a narrow residential road opposite the old Don Brewery building, was aligned parallel to Sackville Street which, before the Don Valley Parkway on-ramps forced the reconfiguration of local roads, ran in a dog-legged kink between Queen and King.

The street is named for Thomas Bright, an early landowner whose land was subdivided and sold by his son William Bright after his death in 1857.

It's not clear why it was deemed necessary to angle Bright St even more than it already was. The subtle move, which shifted the road so that it intersects with Queen at an oblique angle, created at least 14 unusual trapezoid lots which, in turn, forced builders to erect strangely shaped homes. The decision may have had something to do with the sale of the Bright's land along Queen.

It's possible the original outlet, which was once about 8 houses west of its current location, was seen as a more favourable patch of land and swapped for another further east. Maps of the area from the second half of the 1800s don't give a compelling reason otherwise. 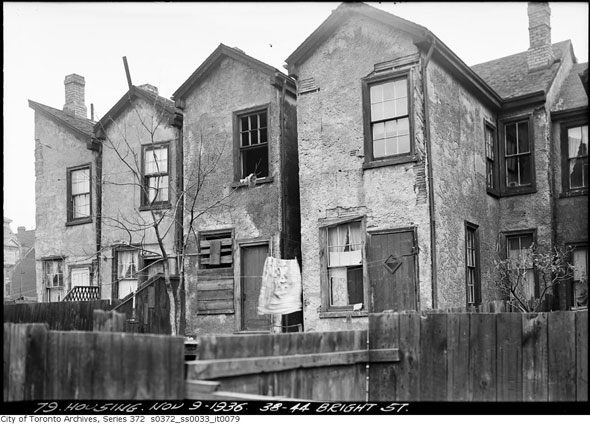 The stories out of Bright Street from around the time it was established are typical of impoverished Corktown, a predominantly Irish, working class enclave. Almost all of its mentions in the Globe and Toronto Star archives are reports of petty crime, unfortunate accidents, and personal tragedies.

In 1879, Mary Metcalf was locked up at No. 4 police station charged with stripping a Bright Street clothes line. John Burns, an eight-year-old boy, was bitten by a bulldog in 1881. John Evoy of 28 Bright made the police blotter in 1883 when he was "arrested ... by P.C. Thompson on a charge of drunkenness and larceny of various articles to procure liquor."

Peter Curran at number 23 was arrested in 1896 with three other mean for his part in an assault on two "Chinamen" and a Mrs. Fennell stepped off the streetcar too soon at King and Bright Street and sustained a "severe scalp wound." She was put in a cab and taken home.

The biggest mention of the street came in 1908 when Matthew and Alma Mathieson were found huddled for warmth in an empty house on Bright Street. The pair hadn't eaten in three days, they said, and had been homeless since Matthew had lost his job at Conboy Carriage Company. The Star called theirs a "story of heart-breaking privation and hardship."

Little Freddy Grissold from number 43 drowned in the Don River in 1910. 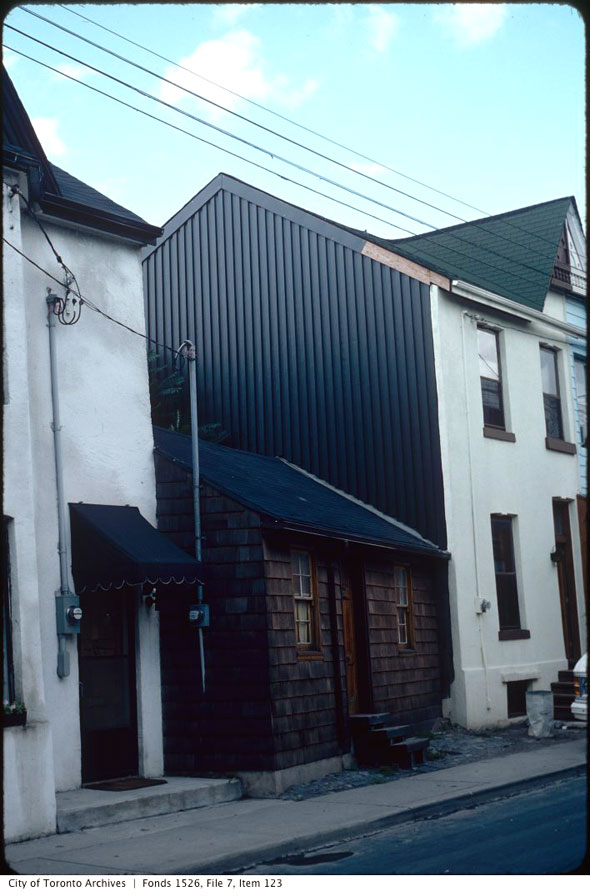 However it ended up tilted away from the street, it's interesting to walk past number 32 and look at the weird angles of the surrounding houses. Even the exterior walls of the more orderly Victorian terrace to the south aren't quite straight, either leaning out into the street or appearing to rest on the home behind.

Last September in The Corktowner, a neighbourhood newsletter, Jaan Kittask, the owner of the unusual home, suggested his house and its neighbour to the north may have been hold-outs from when surrounding terrace was built in the 1860s. Unable to secure ownership of the land the little cottage was built on, the builder was forced to leave a conspicuous gap in his development, he says.

It appears the property to the north was eventually re-built in a style closely matching those of its neighbours, leaving the cottage alone in its protest.