Canada turned 100 years old in 1967. Montreal hosted Expo '67, the Bank of Canada issued a special centennial bank note that contained a stylized version of Stuart Ash's famous maple leaf logo, and in Toronto The Globe and Mail wondered what life would be like in Ontario's capital 100 years hence.

The curving towers of Toronto City Hall were barely two years old that summer. Mies van der Rohe's TD Centre, the first pair of modern skyscrapers to be built downtown, was still a steel skeleton. Up at Wellesley and Bay, the concrete Sutton Place Hotel, the fourth tallest building in the city, had just opened its luxurious rooms to the public.

"North American cities may face nuclear demolition or cultural collapse," John Burchard, dean of the school of humanities and social studies at the Massachusetts Institute of Technology, ominously warned at the start of the story. "If, however, they escape both, they might become beautiful." 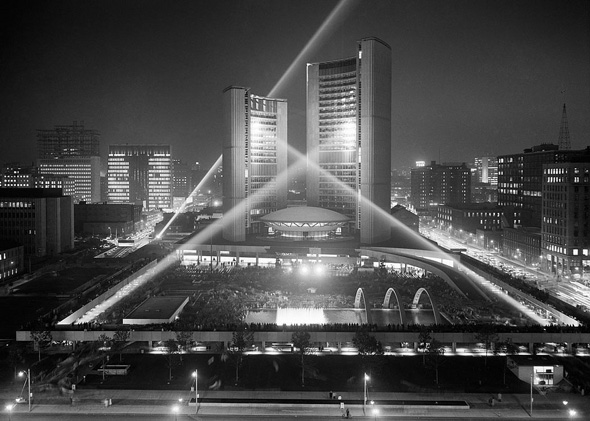 "Toronto will be totally urbanized by 2067," reporter Betty Lee wrote. "The majority of urban-orientated Torontonians will prefer the inbuilt efficiency of the mile-high apartment building or the 20-mile long, continuous metro building of fused apartments, factories, roads, universities, hospitals, and shopping facilities."

(Lee seems to have been talking about Metro Centre, the subsequently aborted plan to redevelop a large swath of abandoned downtown railway lands that gave rise to the CN Tower.)

"About a million persons will choose to live in pre-packaged, one-family dwelling units," many of them located in 100-floor towers near the water front.

In 2067, buildings, all built on stilts for reasons for some reason, sit among landscaped lawns and parks, she writes. Downtown is home to a "three-harbor hydrofoil" port and air terminal, but most people get around via "electrically powered hovercraft," which are stored in skyscraper garages. (That classic sci-fi invention the people tube makes an appearance, but only for inter-city travel.)

The Torontonians of the future use hovercraft because the era of the "super-subway" and "super-highway" have passed.

When it comes to crime, Toronto appears destined to take on a positively dystopian style of policing. "Cops have become psychiatrists ... citizens with symptoms of kleptomania, melancholia leading to suicide or murder, are sent to special community hospitals for corrective neurosurgery or brain stimulation. Mild cases of, say, sex disinterest, grouch or boredom are prescribed anti-mood drugs." 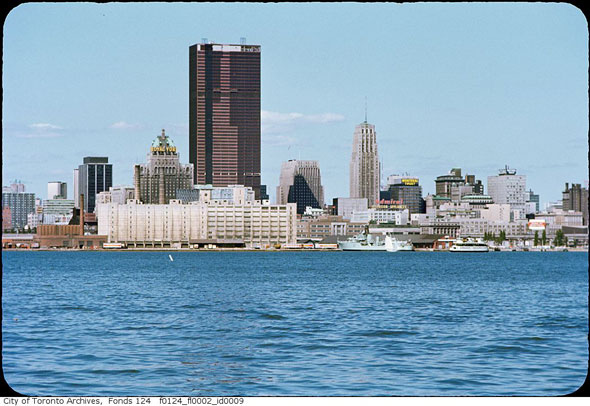 In 2067 hardly anyone works because, its seems, all the work has been done. Although stores will still exist, staffed by "fun androids," most shopping is done over video phone by "housewives" (the gender roles of the 1960s are still a thing, apparently). Clothing comes in single-use packs, and food "much of it synthetic or flavourfully processed from seaweed" is prepared automatically based on pre-set menus by a kitchen computer.

The biggest changes, Lee and her team of experts predict, will come to the built form of the city and its climate. Toronto is a city-state in 2067, its "super-mayor" wielding the power of the prime minister in Ottawa. The city stretches from Niagara, to Oshawa, to Orangeville and Aurora. 25 million people - roughly half the current population of Ontario - live within its borders.

Outside, the climate is tropical, not because we will destroy the environment, but because we will make it do our bidding. The polar ice caps have been intentionally melted and by-products from nuclear energy used to keep Toronto toasty warm. The lake shore is alive with "coconut palms, hibiscus, and frangipanni," the lake dotted with pleasure islands, and the water clean enough for year-round swimming.

"There will be ... year-round tramping through planned jungles where men, bored with their individual flying packs, can commune with nature."

At least there will be jet packs.