That time Toronto pondered an airport in the Port Lands

Earlier this week Toronto city council voted to talk about one day allowing jet flights out of the island airport. If the city eventually gives the green light, the runway could be extended by 168 metres at each end, further into the Toronto Bay and closer to the new Ontario Place parkland.

At around 1,550 metres, the new landing strip would still be about half the length of several of the runways at Pearson, but still considerably bigger than the tiny one the city briefly considered building in the 1970s. It was never built, of course, but in light of recent events the Toronto STOLport was an interesting concept for an urban airport. 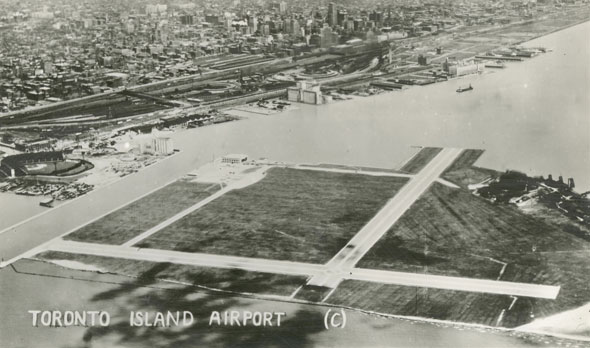 The island airport, Billy Bishop Toronto City Airport to use its full, formal name, was built in 1937. Its construction was authorized by the same controversial council vote that established Pearson Airport (then Malton) and gave the newly-formed Trans-Canada Air Lines a place to land in Toronto.

The artificial field south of Bathurst Street was created by filling in a large lagoon popular with boaters, demolishing an amusement park that included the baseball stadium where Babe Ruth hit his first professional home run, and razing a cluster of homes at Hanlan's Point. Before the extensive landscaping work, the northwestern end of the islands had ended in two distinct fingers.

The airport was originally named Port George VI Island Airport in honour of an upcoming royal visit and was mainly used for pilot training and the occasional passenger flight. The first commercial arrival, a "giant U.S. airliner from New York," contained Tommy Dorsey "The Sentimental Gentleman of Swing" and his band who played over two nights at the dance pavilion at the Exhibition Grounds in September 1939. 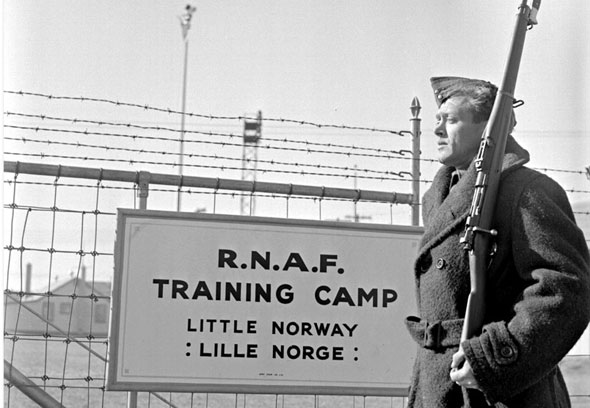 During the middle years of the second world war, the field was used by the Royal Norwegian Air Force and nicknamed Little Norway. The country's government and military leaders had been forced to flee after the Nazi invasion and run the country's defence corps in exile. Pilots received basic training on the Toronto Islands in little fighter planes: Fairchild PT-19s, Northrop N-3PBs, and Curtiss Hawk 75-A8s.

In the 1950s, the city transferred control of Malton Airport to the federal government in exchange for a series of upgrades at the island airport, includng a runway extension, air traffic control facilities, a night lighting system, and new hangars with the intention of expanding the number of commercial passenger flights.

The STOLport idea arrived in the 1970s. The number of planes using the improved facilities at the island airport had started to fall and officials blamed a lack of a tunnel or bridge to the city and the lack of room to extend the runways for jets. The recent upgrades to Buttonville airport had grabbed some of the commuter business as well. 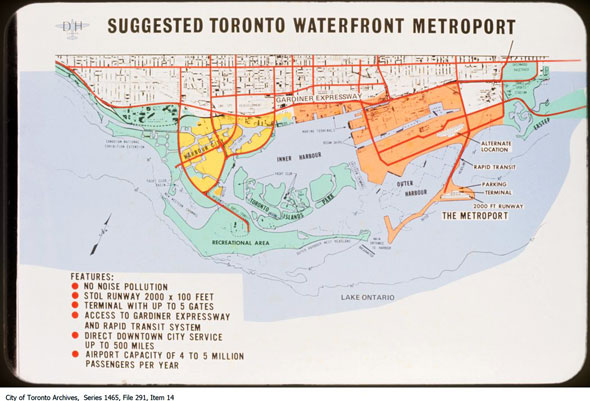 In response to what was perceived as a death rattle from the island airport, the city floated an ambitious redevelopment scheme that would see the airport replaced with an offshore community of some 60,000 people.

Known as Harbour City, the idea came at a time when the city was busily working on Metro Centre, a plan to turn disused downtown railway lands into a mass of office space, commercial buildings, and apartments. (The only Metro Centre components ever realized were the CN Tower and Metro Toronto Convention Centre.)

Urbanist Jane Jacobs called Harbour City "probably the most important advance in planning for cities that has been made this century." The community would be built on little islands and stitched together by residential roads, lagoons, and canals between the airport and Ontario Place. All air activity would be shifted east to the Port Lands or Leslie Street Spit. 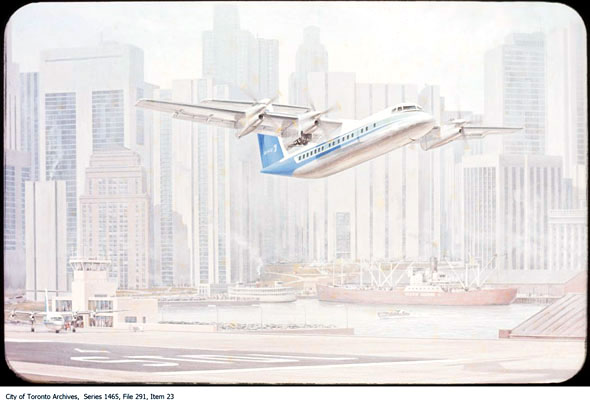 Rather than build a replica of the old airport, aircraft manufacturer de Havilland Canada, which was then assembling its planes at Downsview, pitched the idea of a STOLport - short for "Short Take-Off and Landing Airport" - roughly opposite Cherry Beach.

Had it been built, it would have been extremely small, roughly half the size of the current Billy Bishop layout, and served 50-seater commuter planes capable of zipping between similar STOLports in urban centres as far as Chicago and Sault Ste. Marie.

The compact layout meant small cities could afford to build STOLports relatively cheaply, in doing so creating a network of local commuter airports across Ontario. Toronto alderman Thomas Harris saw the idea, which had the backing of the federal government, as a plan to build a southern version of NorOntario, the province's air transport network in Northern Ontario.

Federally-owned de Havilland said the ideal planes for the network of micro airports were (conveniently) its own new Dash 7s (officially DHC-7s), which were specially engineered for slow landings and quick take-offs. The aircraft, each powered by four Pratt and Whitney turboprop engines, would make as much noise as the Gardiner Expressway from 500 feet away, the company claimed. 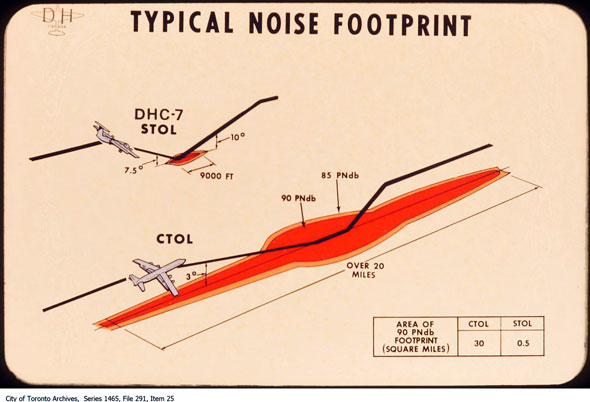 As proof of concept, six de Havilland Twin Otters, the precursor to the Dash 7s, were tried in a short take-off and landing test route between Rockcliffe Airport in Ottawa and the Victoria STOLport in Montreal, which was built in the Expo 67 parking lot, by Airtransit, a subsidiary of Air Canada.

The idea of commuter planes, even tiny ones, flying out of downtown Toronto wasn't without its detractors. "Opponents of Dash 7 say it is absorbing large sums of taxpayers' money [the federal government invested $80 million in the plane's development] to benefit a small number of traveling businessmen, and that basing it on the Toronto islands would have dire implications for the island and the Waterfront parks," wrote Toronto Star reporter Janice Dineen in 1975. "The argument is that a park is no place for an airport."

Mayor David Crombie was also a vocal opponent, citing environmental concerns on the waterfront. Local MPP Marion Bryden predicted the battle over the future of the Toronto island airport would be as big as the struggle against the Spadina expressway. 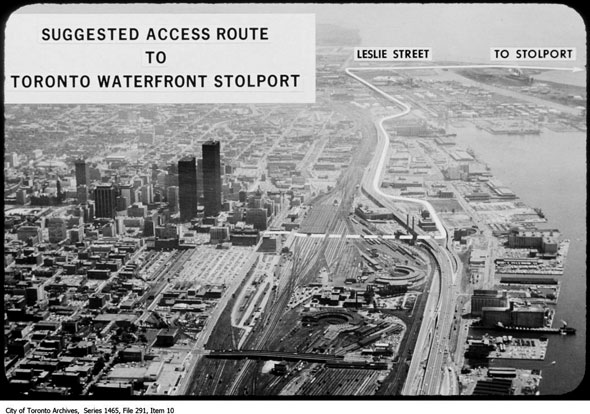 The STOLport would have been linked to Leslie Street by a streetcar or rapid transit line and a road with a direct connection to the now-demolished portion of the Gardiner Expressway east of the Don River. If it couldn't be built mid-way along the spit, de Havilland suggested an alternative location in the Port Lands, just south of the turning basin.

As it happened, the idea of an completely new STOLport was relatively short-lived. The proposal did, however, evolve into the current island airport, albeit very slowly. 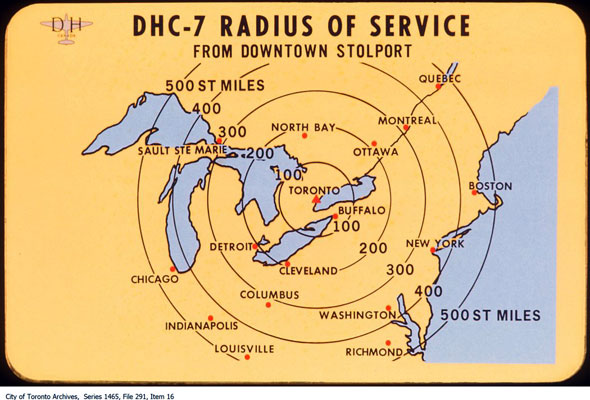 After years of back-and-forth over how the downtown airport should operate now it that Harbour City had fizzled, commuter airline City Express started a service between Montreal, Ottawa, and the Toronto island using turboprop Saunders planes.

In 1980, Voyageur Airways started flying to North Bay and Sudbury from downtown Toronto, too. Combined with training flights, the number of take-offs and landings started to increase. The first short-take off and landing Dash 7s, operated by City Express, arrived in 1984.

The tripartite agreement, signed by the City, the Ministry of Transportation and the Toronto Harbour Commissioners (now the Toronto Port Authority) in 1983, kept jets out, limited runway expansion, and ordered the island airport stay true to its name by keeping the world's shortest ferry ride.

The agreement also officially killed off the STOL principles lauded by de Havilland and the federal government during the previous decade. The Dash 8s Porter Airlines uses today were developed from the Dash 7s but without the special aerodynamic features that would have allowed them to use short runways.

The landing strip at Billy Bishop Airport, which the city will consider extending in 2015, is already almost exactly twice the length it would have been as a STOLport. 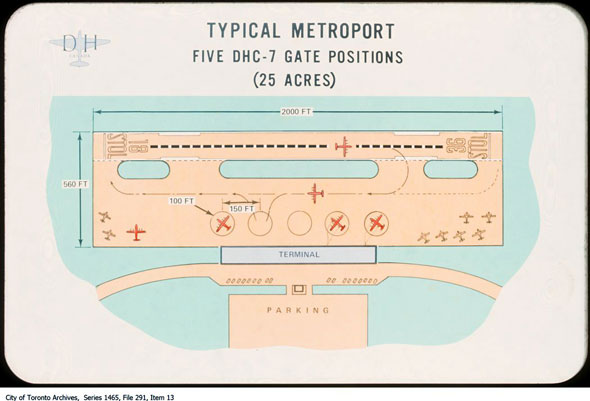