Why is this the most popular archival photo in Toronto?

The most popular photograph in the City of Toronto Archives is a strange one. In it, a white horse is plunging head first into the still water off Hanlan's Point. In a second it will crash below the surface, swim to the top, and do it all over again a short time later.

The horse in the picture was named either King or Queen and was one of a pair owned by J.W. Gorman, a travelling American entertainer who appeared at amusement parks in Boston, New York, and other parts of New England, as well as Toronto.

At the time these photos were taken, Hanlan's Point was home to a popular amusement park that featured a wooden roller coaster, merry-go-round, athletic field, and water shows. The diving horses, a popular form of entertainment, would walk up a ramp to the top of the diving platform and either jump or be dropped through a trap door.

It's not clear whether the horses enjoyed performing the stunt but it's hard to imagine the show maintaining its allure if the animals had to be poked and prodded to the top of the ramp (though that does appear to have been an issue in later years in the U.S.) They clearly weren't injured by the fall, either - King and Queen performed several times a day.

A diving horse act in Atlantic City, possibly the first of its kind, inspired the 1991 Disney film Wild Hearts Can't Be Broken, which was based on the memoir of Sonora Webster, the co-owner of the Steel Pier show who continued to dive despite being blinded in a fall. 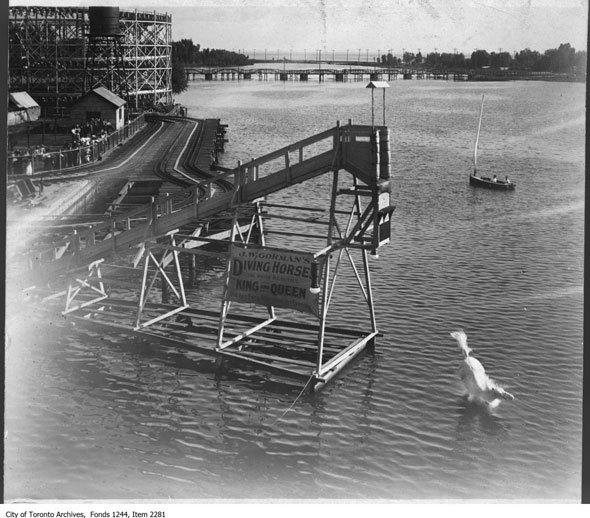 According to Patrick Cummins from the city archives, the picture, one in a series by by prolific photographer William James, is by far the most popular among the massive collection of hundreds of thousands of Toronto images.

Though numbers aren't available for the number of times it has been requested or viewed digitally online, since being uploaded to the city archive's Flickr page it has been accessed more than 6,500 times.

"It is fair to say that this is our most popular image," Cummins says. "As to why the diving horse image is so popular, I really can't say."

What do you think makes the diving horse photo so intriguing?