The rise and fall of the Gooderham and Worts windmill

We are spoiled for choice when it comes to landmarks in Toronto. The biggest and most famous of them all, the CN Tower, edges in to view like a giant bony finger pointed to the sky in all but the furthest corners of the city. At the equivalent to 147 stories, it's impossible to miss downtown.

In 1832, when the Town of York had a population of not quite 4,000 and barely extended north beyond Queen, the city's most distinctive landmark was a six-storey windmill at the mouth of the Don River. Built by an English miller amid dense thicket, the building was one of the tallest in the town and a natural focal point in the early skyline.

It was also essential to establishing what would become the Gooderham and Worts distilling empire, a nationwide industrial concern its tragic builder would never live to see. 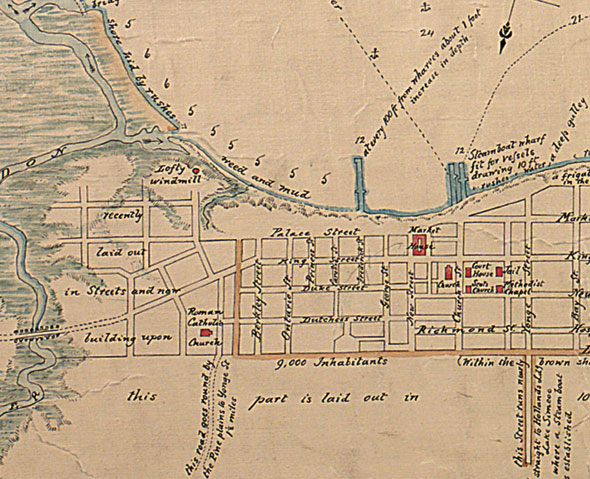 James Worts was raised on the fertile plains of Suffolk in southeast England. For about 18 years, he owned and operated Kirtley Mill, one of hundreds of grain mills in the region, near the town of Bungay on the winding River Waveney. In 1818, Worts married Elizabeth Gooderham and started a business partnership with her brother, William Gooderham, who would later become the other half of Toronto's famous distilling company.

Worts came to Canada with his 14-year-old son, James Gooderham Worts, in 1831, in the midst of a severe depression in the United Kingdom. In York, Worts Sr. bought a small plot of land from the Province of Upper Canada south of Front Street, east of Parliament, that had once formed part of The Park - a large area west of the Don River earmarked for public use.

Using money from William Gooderham, the Worts laid the foundation for a six-storey circular windmill they thought would be ideally placed to catch the stiff winds that blew across the plane of the Toronto Bay. The structure, similar to ones built in Britain in the same period, would mill wheat into flour for local bakers. Whiskey wasn't part of the original business plan.

The surviving records tell us the windmill consisted of 105,000 bricks, required 216 bushels (about 7,900 litres) of quicklime, and about 100 loads of sand to build. 12 labourers worked on the project and Worts dutifully recorded their levels of intoxication when he docked their pay. They were variously: "partly drunk," "drunk half a day," "sleepy drunk," "dead drunk," and "drunk as David's sow" in his employment.

William and Elizabeth Gooderham joined the Worts in the summer of 1832, shortly before the completion of the structure. When the wooden cap and sails were hoisted into place, the Worts' windmill would have been one of the tallest buildings in the town of just under 4,000 people - only the odd tree and church spire would have climbed higher.

As such, Worts' windmill became a popular focal point for artists who sketched and painted early York. Set among scrubby brush close to the shore of the lake, it's distinctive shape is visible in the background of William Armstrong's 1835 painting of skaters on the Toronto Bay and it's the focal point of a sketch of the town by Thomas Young from 1832, lithographed above.

Apart from it's physical presence, the tower was an important reference point for surveyors. The Windmill Line, an imaginary barrier that ran across the Bay to the site of Fort RouillĂŠ, an old fort located on what's now the CNE grounds, limited the extent to which wharves and jetties could extend into the water.

The image at the top of the page, which undoubtedly employs a little creative license, shows surveyors marking out the Windmill Line. It was painted in the 1930s by Rowley Murphy. The New Windmill Line was established in 1893 further into the water.

The first run of the mill finished in December 1832 and the first sale was recorded that October to Robert Ferrier, a King Street baker. The flour from the mill was sold in wooden barrels for about $5 each. Wheat meal and pollard, the unwanted meal leftover at the end of the milling process, was also produced and sold.

One early customer, William Arthur, may have provided the inspiration for Gooderham and Worts' decision to become distillers. Arthur regularly bought "wheat, middlings, rye or malt," which suggest he was running a distillery somewhere in the town of York, possibly on King Street near the St. Lawrence Market or near the Don at Gerrard. The records aren't clear.

It's not clear when Worts and Gooderham, as the company was known for a time, began turning offal - waste grain and sweepings - into lucrative alcohol, but the idea seems to have arrived a few years after the mill began regular production. Tragically, James Worts wouldn't live to see the business develop further.

In February 1834, his wife Elizabeth died in childbirth. Racked with grief, the miller killed himself by jumping into the company well a short distance from the windmill. He was buried at St. James Cemetery and there is a memorial to him and Elizabeth in Horning, England. 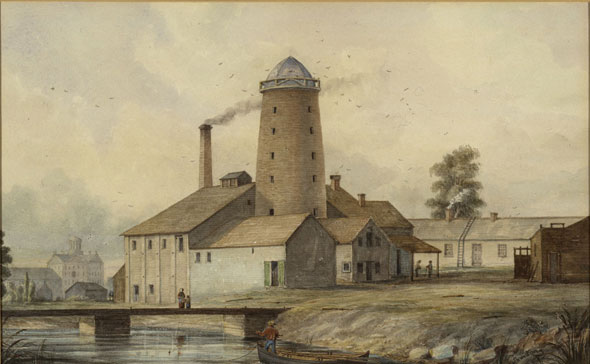 William Gooderham ran the company on his own for several years and later brought in Worts' son James Gooderham Worts. The pair were certainly not the first to try distilling - there were at least five distillers operating in the early years of the windmill, including William Arthur - but by 1837 they had built a small still and produced their first batch of whiskey.

The windmill remained a vital part of the Gooderham and Worts operation but it never quite worked as James Worts expected. In 1845, due to a lack of wind, the company installed a steam engine in an attempt to bring a measure of stability to the output. The sails were removed in 1853.

The windmill was finally knocked down to make way for buildings in Distillery District in 1859.

Part of its old wall are marked with red bricks on Gristmill Lane behind Thompson Landry Cooperage Gallery. 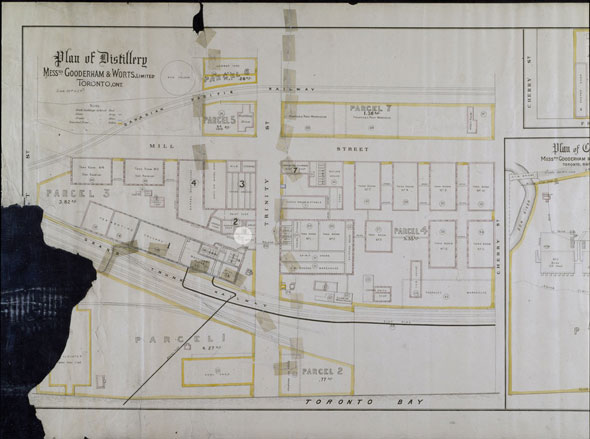 The location of the windmill is marked in white.