BMO Field should be renovated and expanded to house the Toronto Argonauts, the owners of the CFL team say. Maple Leaf Sports and Entertainment, the company that also owns the stadium's current tenants Toronto FC, is asking the City, Queen's Park, and Ottawa to chip in $10 million each for a new roof and up to 10,000 extra seats.

In a report to be considered by the City's executive committee next week, MLSE says it wants the stadium, which is owned by the City of Toronto, to seat 30,000 by 2016 - many of them in a new tier above the east stand - and have rain protection for almost all spectators. Right now, all seats at BMO Field are exposed to the elements.

The proposed roof, which is similar to those in European soccer stadiums, would not cover the field. 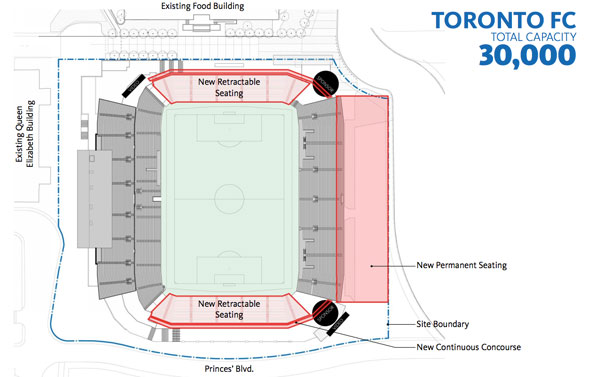 Diagrams presented to the Exhibition Place Board of Governors show new retractable seats at the north and south end of the field to be used during Major League Soccer games and special events such as the MLS All Star Game and the NHL Winter Classic. MLSE is also promising two new high-resolution video screens, a sound system, and field lighting.

The Argos' current stadium agreement with the Rogers Centre expires in 2017. Moving to a new "appropriately sized" arena is vital to the long-term stability of the franchise, the team says.

All being well, initial construction is anticipated to start Sept. 1 and be in full swing by 2015, working around the soccer schedule. The roof is predicted to be complete by May 2016.

MLSE says it will cover the remaining $90 million of the predicted $120 million cost and tweak its revenue sharing agreement with the city in order to pay back the taxpayer investment.

What do you think of the plan? Will expanding BMO Field benefit Toronto FC and the Argos?