The Royal Ontario Museum has revealed plans for a new public plaza and green border that will bring trees, flowers, and grass to the corner of Queen's Park and Bloor Street. The designers of the all-season "outdoor gallery," Hariri Pontarini Architects and landscape architect Claude Cormier, whose team was responsible for Sugar Beach, hope the overhaul will "humanize" the public space on three sides of the 100-year-old museum.

Currently, much the area skirting the museum (with the exception of Philosopher's Walk) is concrete sidewalk with little in the way of trees or greenery. The plaza in front of the Michael Lee-Chin Crystal, scaled back significantly from the original plan and often crowded with tour groups, is little more than a few stone benches arranged amid a scattering of signs. 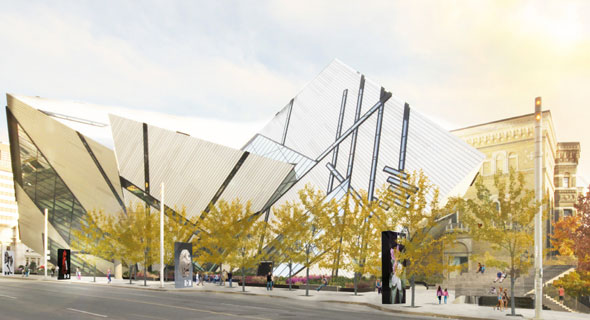 There will be a performance space for the use of the museum, a new canopy over the main entrance and "totemic information sentinels," which appear to be vertical ad poles along the Bloor Street curb. The ROM, which has large natural history and wildlife departments, hopes the green space will double as an "outdoor gallery."

The Globe and Mail announced the project in February last year. At the time, the museum's vice-president of communications said the new plaza could be complete for March 19 this year provided it could find a way to cover the $3 million price tag.

The ROM turned 100 years old last week and the plaza is one of four centennial projects designed to transform how the museum welcomes and interacts with visitors.

What do you think of the designs?