Don't expect the shell of the half-finished condo building at Queen and Pape to spring to life any time soon. A lengthy legal battle between a real estate developer and a prominent diet doctor has cast the immediate future of the building, and several others in Toronto, in serious doubt.

In a storyline that wouldn't be out of place in a made-for-TV movie, the development company that promised to finish the stalled Film Studio Lofts teamed up with Dr. Stanley Bernstein, better known simply as Dr. Bernstein, the founder of a nationwide weight-loss clinic, but ended up fighting it out in a bitter legal dispute over an alleged theft of mortgage proceeds.

According to court documents, The Rose & Thistle Group, led by Norma and Ronauld Walton, bought the shell of 1003 Queen Street East on June 7, 2012. Bernstein invested $800,000 in the company set up to finish the condos and provided a mortgage of $400,000. Over the next year, the company worked to shore up the leaky shell of the 10 residential and two retail units, building much of the metal shell and installing windows.

The project started life in 2006 as the Film Studio Lofts and had a targeted completion date of Fall 2007. Construction stalled and down-payments on the units were refunded by the original developer. 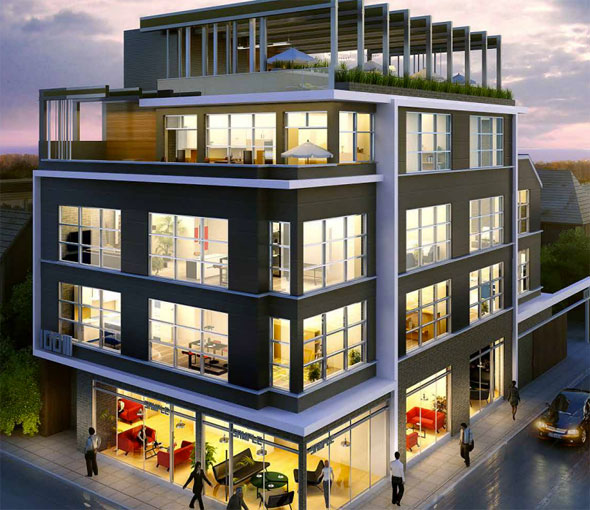 The Rose & Thistle Group Ltd. started buying property in Toronto in 2001 and averaged about three purchases a year until 2013. Dr. Bernstein, a neighbour of the Waltons, began investing in the company in 2008. In total, he put more than $100 million into some 31 properties, including 1003 Queen Street East.

Bernstein took legal action last summer when the proceeds from $6 million in mortgages, taken out by the Waltons on two joint-owned properties without his knowledge, ended up in Norma Walton's personal bank account. An Ontario Superior Court judge ruled that the Walton and Bernstein properties, which included the Red Door Shelter on Queen East and a former Salvation Army building on Pape, should be placed in receivership and sold.

Last year, Norma Walton told me she expected the building to be complete by April 2014. Since then, only some of the bright yellow cladding, damaged by exposure to the elements, has been replaced. Judging by the state of the exterior and lack of interior fittings construction is some ways from completion.

The building is now up for sale once again. If it's sold, the new owners will become the third company to attempt to build condos on the site.

The Norma and Ronauld Walton are appealing the judge's decision. Expect this one to drag on.