The best and worst TTC bus and streetcar routes

How did your bus or streetcar do in the last quarter of 2013? Probably not well, if the latest TTC rankings are any guide (and they may not be, but more on that in a moment.) On average, the Toronto Transit Commission's 174 active surface routes managed to operate on or close to schedule just 65% of the time from October to December.

By its own admission, the TTC's route performance indicator, which ranks reliability as a percentage based on how often a bus or streetcar arrives three minutes either side of schedule, paints an incomplete picture. 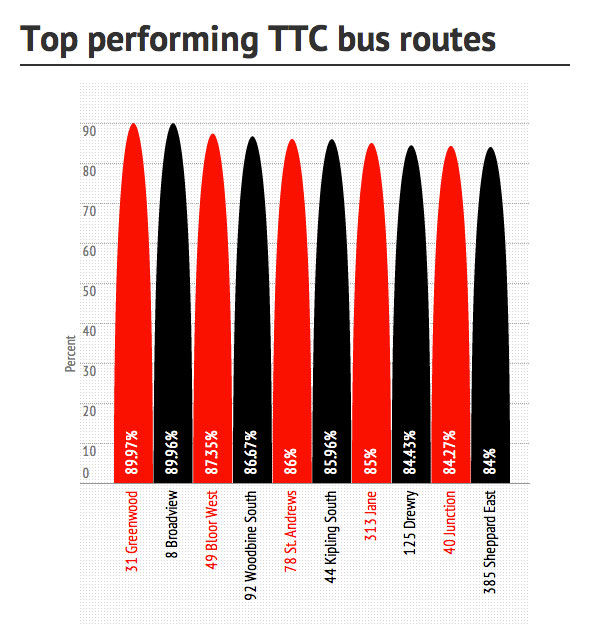 Let's take an example: The 31 Greenwood, the most reliable bus according to the rankings, benefits from a short route - Greenwood station to Queen Street and back - quiet traffic, and a frequent schedule.

On the other side of the coin, the 26 Dupont, which hits its target 59.09% of time, worse than the TTC average, is hobbled by a long route - Jane station to St. George station via Jane, Dupont, and St. George - heavy traffic, and an infrequent schedule.

(In the interest of fairness, the worst bus chart excludes several rush hour-only services that do not operate for the majority of the week.)

"The percentage doesn't really give a fair way of judging reliability," said the TTC's Chris Upfold in an email. "That's why we're moving to a Journey Time Metric, i.e. what we say your trip should take versus how long it actually takes." 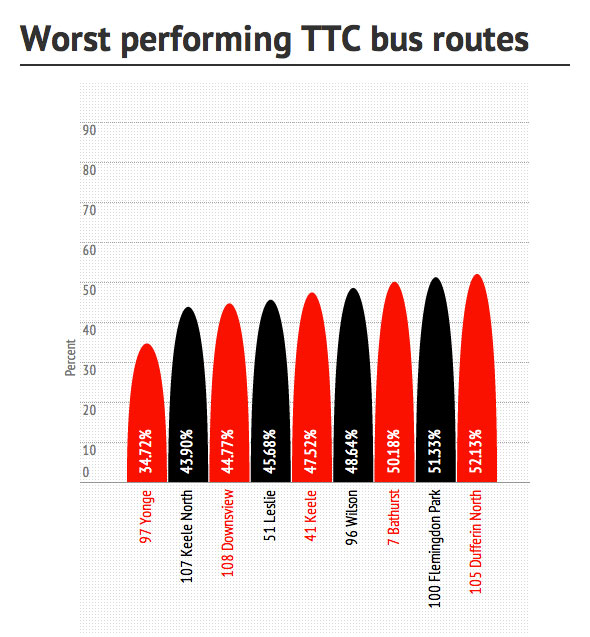 The streetcar rankings tell another story. Both the 510 Spadina and 512 St. Clair score well thanks to a frequent schedule and a dedicated right-of-way that eliminates many of the problems of associated with operating in mixed traffic. Lines without a dedicated lane and a long, crosstown route, like the 501 Queen, tend to struggle with punctuality, according to the data.

The Downtowner and Kingston Road services score low because both operate only during peak hours. The 508 Lake Shore streetcar was excluded completely because it only operates seven times a day, giving it just 8.33% reliability. 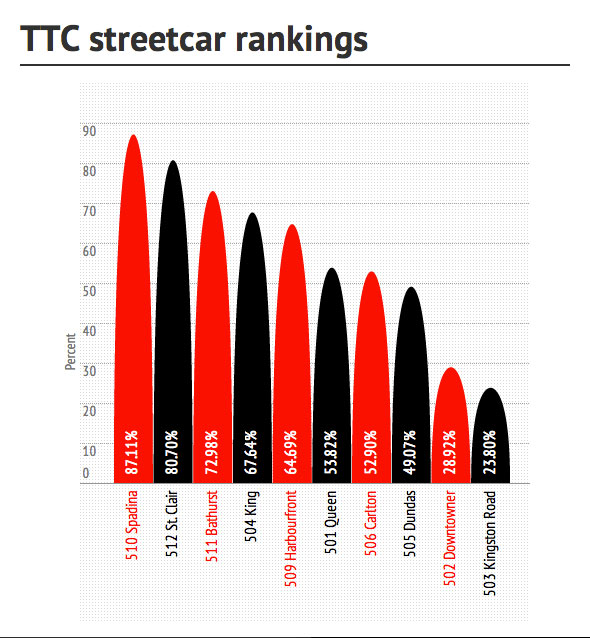