By the numbers: Snow in Toronto

The great white winter of 2013/2014 has so far provided plenty of wild weather to keep city's transportation division busy - and there's likely plenty more work on the way. For comparison, the typical winter (based on a 30-year average) drops 133 cms of snow on Toronto, requiring 40 to 50 "de-icing events," as ploughing and salting runs are officially known.

So far this winter 77 cms of snow has been recorded at Pearson airport, well above the 64 cms expected for this time of year. There have been a total of five extreme cold alerts, covering 19 days. The record all-time record was established in the winter of 2008/2009.

In December, the city set aside more than $80 million for ploughing, salting, and sidewalk clearing, which works out to a little over $30 per person. 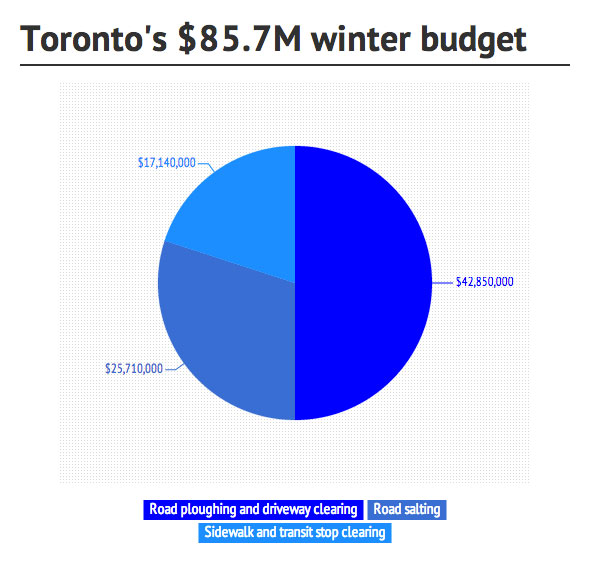 The biggest chunk of the city's winter operations budget goes on snow removal, specifically ploughing and driveway clearing. Salt purchasing and distribution are also a massive chunk of the overall budget. Toronto dropped $10.5 million on its road salt stockpile before the cost of spreading it was factored in. Clearing sidewalks and transit stops cost $17.1 million. 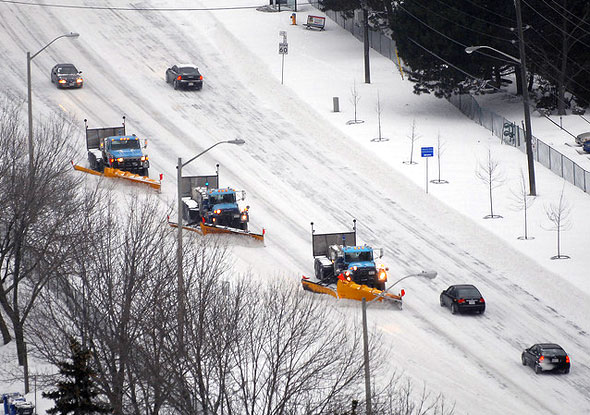 That salt doesn't spread itself, so the city also employs a fleet of winter vehicles and a crew of more than 1,000 people to keep them working. The sidewalk ploughs - scaled-down versions of the street vehicles - pull double-duty, clearing transit shelters and the public walkway of snow when more than 8 cms is on the ground. Main roads get cleared when there is more than 5 cms of snow. 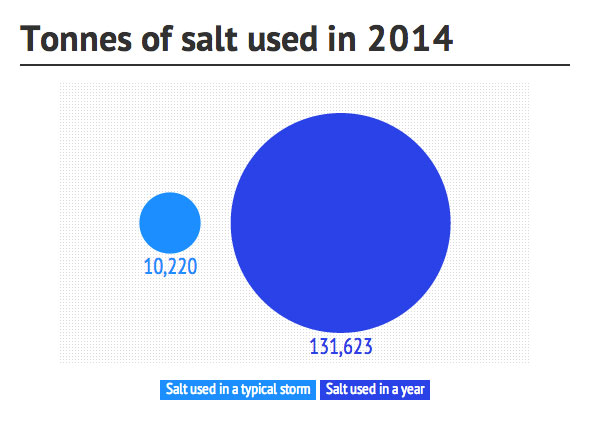 Road salt is crushed granules of sodium chloride - the same substance that adds that all-important pep to food - sometimes in the form of a dry brine mixed with other agents to stop bouncing and reduce the impact on the environment.

A five-year study carried out by Environment Canada found road salt in significant concentrations can have a damaging effect on plants, animals and the aquatic environment, so the city has been committed to reducing its salt usage by 10 to 15 per cent this year. Still, de-icing is a massive undertaking.