The TTC is considering shifting some of its streetcar and bus stops to the nearest traffic signal or pedestrian crossing in an attempt to improve safety and make surface vehicles more consistent for motorists. It's also thinking of relaxing the rules regarding transfers.

Many of the city's 10,000 or so surface stops located mid-block, away from a safe crossing point, posing a hazard for pedestrians and making it hard for drivers to predict when they will need to stop.

"Experience has shown that, the further away a stop is from a traffic signal, the more likely customers are to jaywalk across a street at an unprotected location," a TTC staff report on the matter says.

Implementing these changes would mean longer distances between stops on certain routes, especially through the downtown core. The diagram below shows how stops could be spaced further apart at traffic lights on Queen between Spadina and Church.

The TTC is considering the changes after discussions with the city's Transportation Services division about how to reduce traffic congestion in Toronto. Spacing stops further apart would, the TTC believes, improve the flow of traffic for all road users. 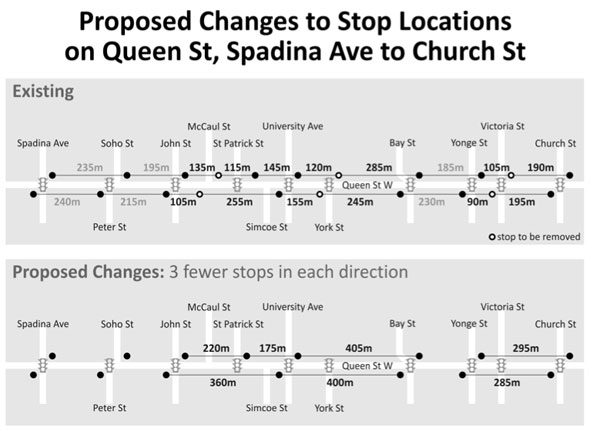 At the same time, the TTC board is also discussing implementing time-based transfers instead of the current continuous-trip system. In English, that means issuing transfers that a good for a certain period of time - 90 minutes or 2 hours, say - allowing for quick stops at the coffee shop or grocery store en route.

Right now, transfers are only valid as long as the rider keeps moving toward their destination within the TTC network. Exit the station or step off the streetcar and you'll be expected to pay again.

Implementing the system, which customers have been asking of the TTC for years and is commonplace in other jurisdictions, would cost up to $20 million a year in lost revenue. A 90-minute transfer period would result in a $12 million annual loss, for example.

The TTC might not have the money to spare in its budget but abuse of the current transfer system costs around $14.8 million every year, it estimates. The loss would also be further offset when the electronic Presto fare cards are finally rolled out across the transit network, hopefully in time for the Pan-Am Games (but probably not.)

What do you think of these proposed tweaks? Do you think positioning bus and streetcar stops at crossings and traffic signals make sense? What about time-based transfers?