That time the TTC mascot was a giant beaver

In 1968, the Toronto Transit Commission unleashed Barney Beaver, its children's safety mascot, on an unsuspecting population. The giant dark brown castor with its two massive pearl incisors was meant to educate the kids of Toronto about staying safe on transit, which it did just fine - it's just shame Barney almost always looked like a terrifying monster on film.

The black and white pictures of Barney cast him as a shaggy silhouette with only a pair of bright eyes and teeth. His outsize TTC driver's hat was his only piece of clothing. 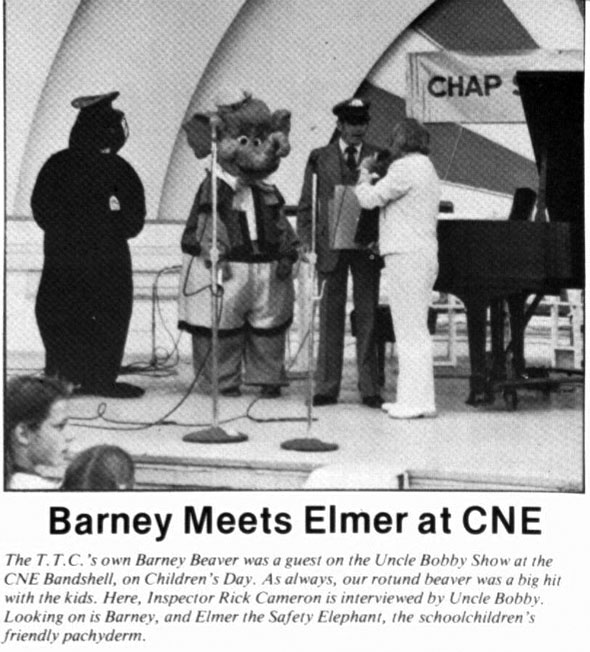 Barney was first introduced in the TTC's internal magazine, The Coupler, in December 1968. In November of that year, Barney and his handlers made their first public outing to Wilkinson Public School on Donlands Ave.

Barney came with his own anthem, titled "I'm For Safety," which was co-written by Wilkinson teacher Ross Knechtel, an exchange teacher from the U.K., and the TTC's Dave Prentice. Here's a sample of the lyrics. The emphasis belongs to the original print:

Keep your arm in
Head in too
Or that could be
The end of you!"

The song appears to have been part of the repertoire of the TTC's house band, the Sunshine Boys, with whom Barney would perform at public safety events and shopping plazas. The beaver split duty between lead dancer and occasional drummer, according to promotional pictures. 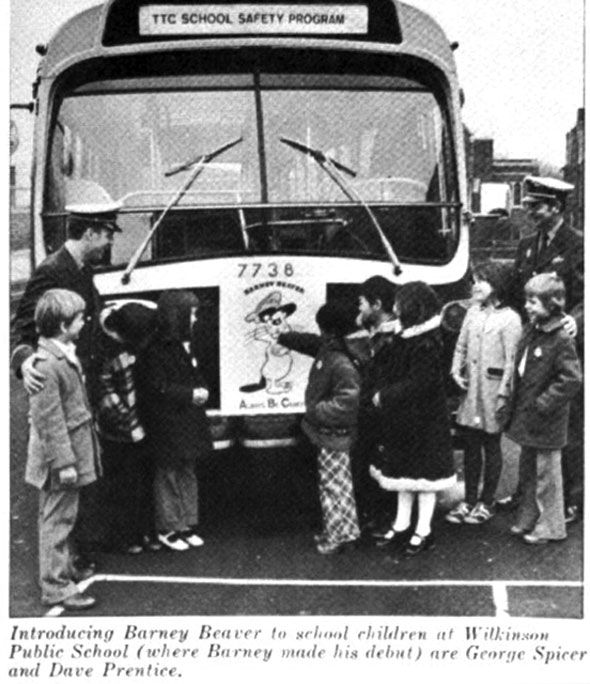 Barney Beaver had a year-round tour schedule with stops at Toronto schools. The creature and his support staff traveled in one of several city buses that doubled as a mobile classroom. Inside, kids watched as Barney and TTC staff performed pratfalls, swung from the bars, and gracelessly fell to the floor as the bus lurched into motion, in short illustrating how not to be a straphanger.

It's easy to laugh at Barney, but the idea was a sensible one: "Introduce the do's and don'ts of transit safety; to initiate the young passengers of the future into becoming responsible citizens."

The slogan of the education program was "I'm for Safety," and the TTC printed buttons and t-shirts adorned with Barney's cartoon likeness. "[The] grassroots approach to safe transit travel may seem a little unorthordox to staid adults ... children find their antics amusing and visually it tells the story."

It's not clear when Barney went to "the great dam in the sky," in the words of current Coupler editor Mike DeToma. An image search shows a modernized Barney at events as recently as two years ago but it appears he's retired, officially at least.

The Barney Beaver Safety Bus, a special rig that allowed kids to rev a real diesel engine, was still in use in 2011, according to videos on YouTube.

Do you remember Barney Beaver? Did you catch him in person at one of the TTC's live events or at your school? Let us know in the comments section.