The bloody story of "the mad dog of Jarvis Street"

I've held on to this picture for some time, unsure what to do with it. I'm not sure how I first came across it in the Toronto Telegram archives but it's always stuck in my mind.

The picture shows a suited Mickey McDonald with his arm around his wife, Margaret, or "Kitty Cat," but tells nothing of the man's violent history as the "the mad dog of Jarvis Street." 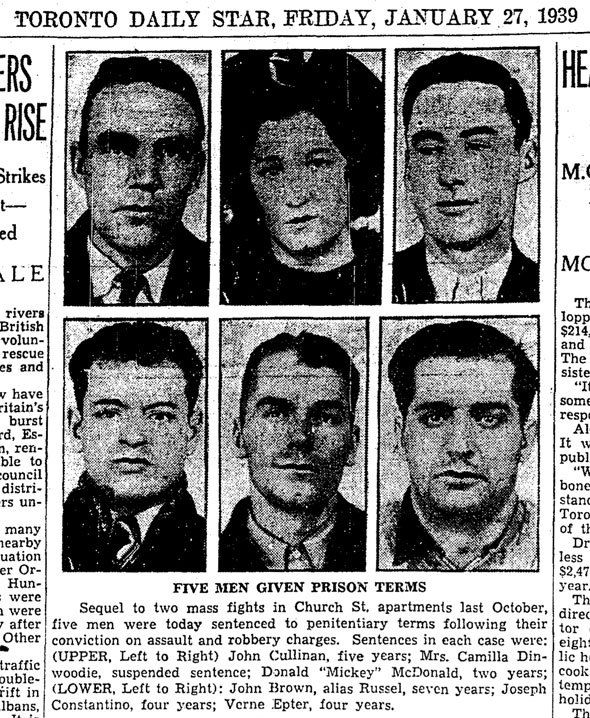 Donald "Mickey" McDonald first appeared in print when he was sentenced to two years in Kingston Penitentiary with four other men for his part in the gangland assault and robbery of James C. Elder at his Church St. apartment in 1938.

After beating Elder, McDonald and his gang stole four cases of beer, seven bottles of whiskey, a bottle of gin, $2 in cash, and an overcoat. "Kitty Cat" McDonald drove the group to the apartment, but was discharged by the court.

During the trial, McDonald's father made a tearful plea for leniency, saying his son's behaviour was the result of alcohol addiction. He had only been out of jail four months for a previous offence before the old gang had pressured him to return, he said.

"Drink is his downfall. He wanted to avoid their company. Whatever he did that night it was not by deliberate choice. He took the liquor that night, but I am the man who paid for it a few days later."

John "Russel" Brown, a fellow gang member, echoed the observation. "I would like to say a word, too, not for myself but for McDonald, who was a victim of this whole thing."

In passing sentence, Judge Ian Macdonnell said he had to make an example of the group because of their habit for repeat offending. "Gang warfare, such as was never believed in Toronto, must go," he said.

But that wasn't the end of it. A month later, police charged McDonald and his brother, Alex, with being part of a gang that murdered James Windsor, a North Toronto bookkeeper and nightclub owner, on Jan. 7, 1939.

"We can't get justice here," he yelled, shackled to his brother.

Later, two men would claim Mickey had admitted to the crime.

John R. Shea, a surprise witness who was himself awaiting trial on a bank robbery charge, said he had been drinking with the McDonald brothers at an apartment on Ossington Ave. when they had left "to do a job."

"I've just killed a man ... I've shot a man and he's dead," Mickey said on his return. "I shot him right here" and pointed to his stomach.

The jury rejected an alibi that suggested the pair were engaged in a separate robbery at the time of the murder and found Mickey guilty of delivering the fatal shot.

The judge sentenced him to death by hanging. Alex, however, was acquitted based on the same evidence. 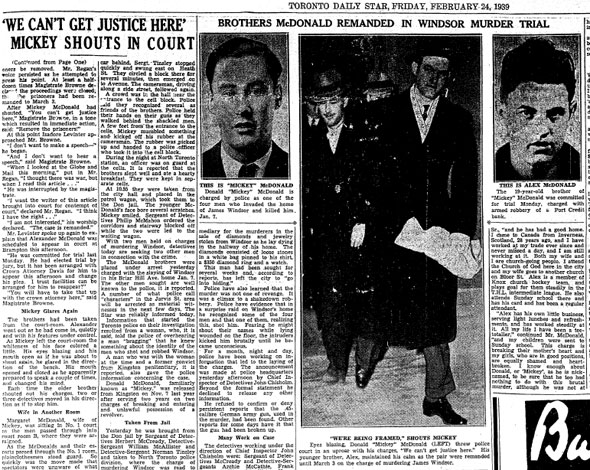 But there was still another twist in the tale. Mickey appealed the conviction and won based the jury's inconsistent behaviour. He was sent back to jail to serve the remainder of his assault and robbery conviction.

Shortly after his release, Mickey returned to his Jarvis St. territory where he and an accomplice beat and robbed an 86-year-old hotel doorman of his wristwatch. He was sent back to Kingston for two years and six months.

In 1944, McDonald received his longest prison sentence yet for taking part in an attempted hijack of $35,000 of liquor. The judge sentenced him to 15 years.

"He alone knows how many shakedowns he has attempted, how many people he has robbed, and how many he and his cohorts have beaten up," wrote The Globe and Mail after his release from prison in 1947.

No more was heard from McDonald after the hijacking conviction, at least in the newspapers, and we will certainly never know why he chose to write "remember" beneath that picture.