The history of the first Tim Hortons in Toronto

On June 1, 1970, drivers pulled off The Queensway in Etobicoke and did something no one else in Toronto had officially done before - order a Tim Hortons coffee.

According to the official version of events, six years after it was founded in Hamilton, Ont. by former Maple Leafs defenceman Tim Horton, the wildly popular coffee and donuts franchise had opened its first Toronto store at 853 The Queensway.

This would ultimately prove to be a foothold for an empire in one of Canada's largest cities.

But the Queensway store was not technically the first Tim Hortons in Toronto - an earlier incarnation of the company fled the city amid falling sales and rabid competition in the 1960s before almost dying out entirely. 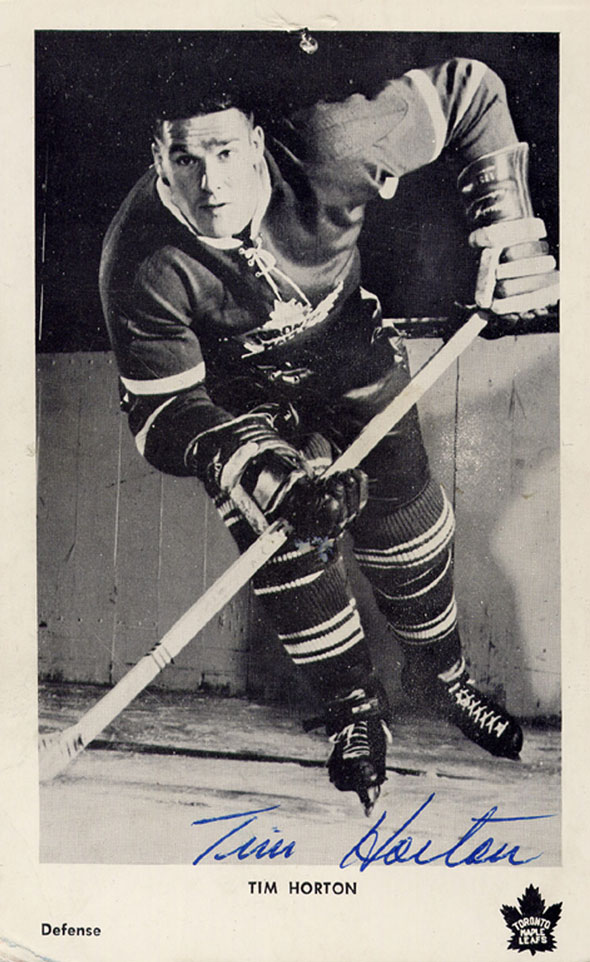 Born in Cochrane, Ont. in 1930, Miles Gilbert Horton - "Tim" professionally - was the archetypal hockey strongman and a bona fide star for the Toronto Maple Leafs. Over 20 seasons with the team, Horton lifted the Stanley Cup four times and was an All-Star three times.

Horton's first attempt to parlay his hockey fame into a successful off-ice business came in the early 1960s. Unlike today, hockey players couldn't count on a regular massive paycheck and short careers led many to seek backup business opportunities for their twilight years.

Tim Horton thought his post-hockey career lay as a BBQ or steakhouse franchisor. His first investment, however, was Tim Horton Motors, a used car dealership in Willowdale that opened in the early 1960s and was run by Horton's brother, Gerry.

At the time, Tim Horton lived with his wife, Lori, in a Warden Ave. bungalow. The hockey star regularly had his hair cut in nearby Colony Plaza, a Lawrence Ave. shopping mall where Jim Charade, a Quebec-born businessman and jazz drummer, was running his doughnut store "Your Do-Nut" - later (briefly) "Royal Do-Nut."

Charade was in the market for a used Pontiac, and mutual friend Jim Griggs connected the pair. What the doughnut store owner needed more than a car, however, was a celebrity endorsement to boost his struggling sales.

Sensing a common goal, Horton agreed to form a partnership with Charade with plans to franchise restaurants similar to Swiss Chalet and Harvey's.

Charade renamed Your Do-Nut to "Tim Horton Do-Nut" - making it technically the first cafe to use the Horton name. 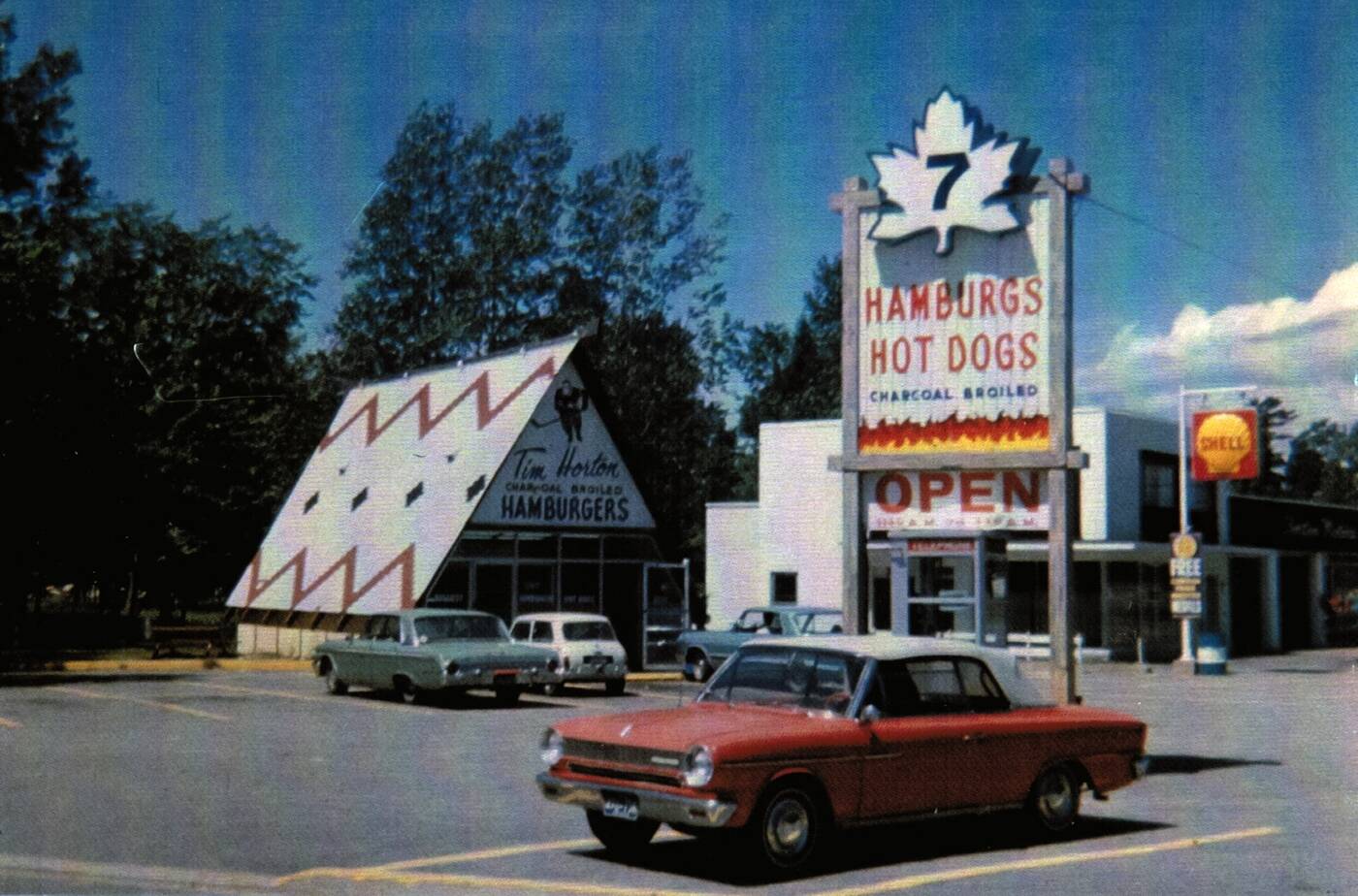 The pair then opened Tim Horton Hamburger and Drive-In restaurants around Toronto and North Bay, including a brief period at Yonge and Dundas in a building that also housed the company offices.

The Yonge Street store excepted, the restaurants were in the mould of 1960s drive-ins: a walk-up counter, few indoor seats, all anchored by a large parking lot. Unlike A&W, there were no carhops - customers ordered and bought food to their vehicles themselves.

Reading the description of the restaurants in Double Double, author Douglas Hunter's insightful history of Tim Hortons, the mix of offerings sounds confused at best.

The Lake Shore location specialized in chicken (there was even a "Tim Horton Chicken"-branded VW van that doubled as the Charade family car) while the Yonge Street store flipped steaks and sold doughnuts.

The business quickly failed and the last store, on Lawrence Ave., closed in 1964. Horton didn't like to talk about the disastrous venture in subsequent interviews. "Let's just leave it at that. They flopped," he told Canadian magazine shortly before his death.

At the suggestion of Charade, the pair moved the company out of Toronto. The competition in Scarborough was fierce: there were already more than 30 drive-ins on Lawrence and Eglinton avenues in 1967 and rivals Country Time and Mister Donut were a major force. 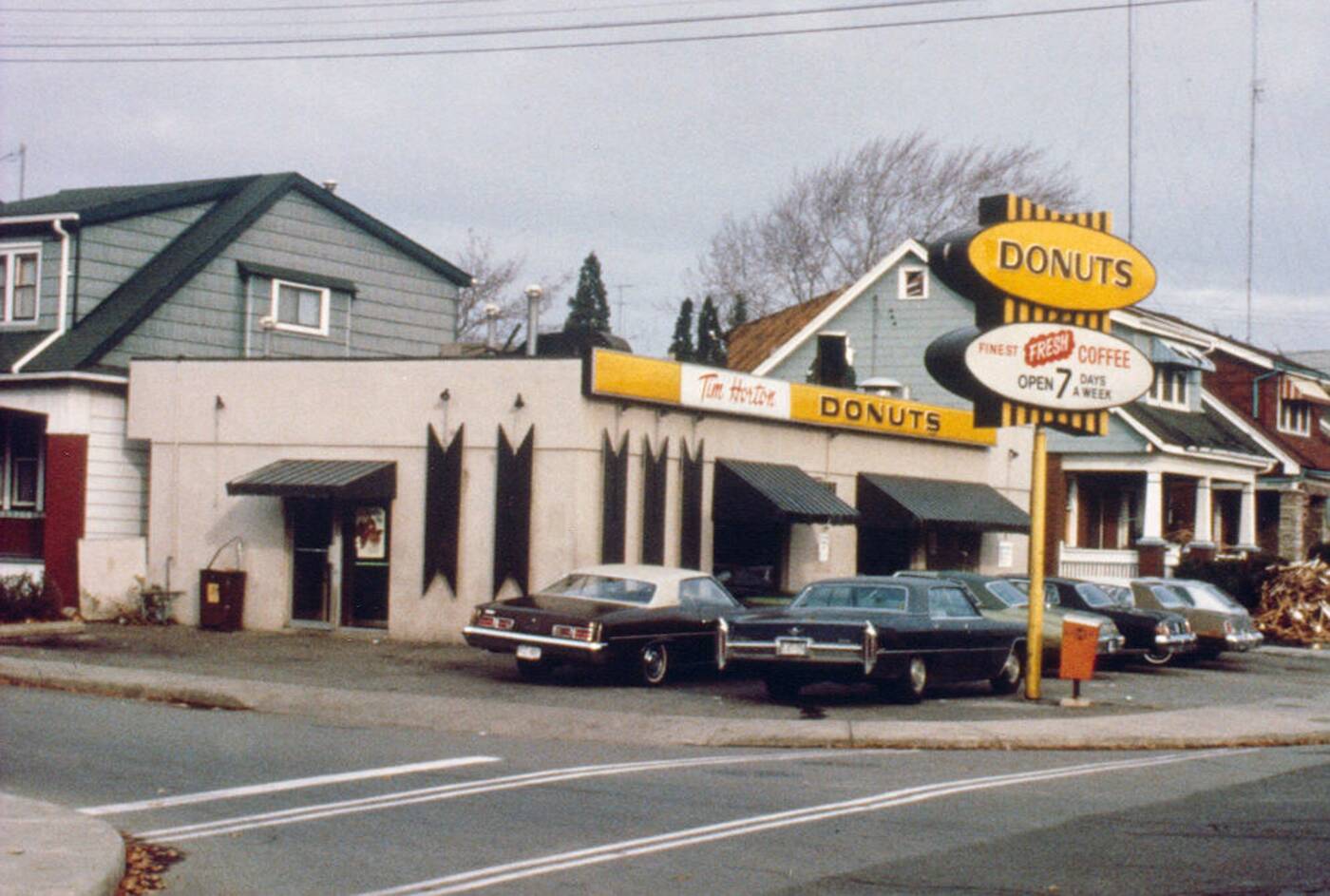 Jim Charade selected a former Esso station at Ottawa St. and Dunsmure Rd. in Hamilton for the retooled company's first location. It was close to one of the town's major employers and sold coffee and pastries - a coffee and doughnut for a quarter and 12 doughnuts for 69 cents.

The original interior, as recalled by Hunter, was bleached white and purple with a lava rock wall texture. Unlike current stores, the first Tim Hortons had counter seating and a window through which customers could watch the some 40 varieties of doughnut being prepared.

The store was successful but internal strife would force several ownership shuffles: Brown sold the franchise back to Jim Charade and a heavy-drinking Englishman was installed in his place.

At the same time, the company was restructured into an equal partnership between Jim Charade and Tim Horton. Charade had previously owned most of the business and Horton had licensed the use of his name to the company.

Accusations of stealing directed toward the English owner forced the partnership to place a call for a new franchise owner, which was eventually answered by local beat cop Ron Joyce.

Joyce, a father of seven, bought the franchise rights with a borrowed $10,000 and opened a second store on Hamilton's Concession St..

Jim Charade, however, was almost broke. He quit the company and was closely followed out the door by Joyce, who sold his franchise locations back to Tim Horton, leaving the company a partnership between the NHL star and his wife. 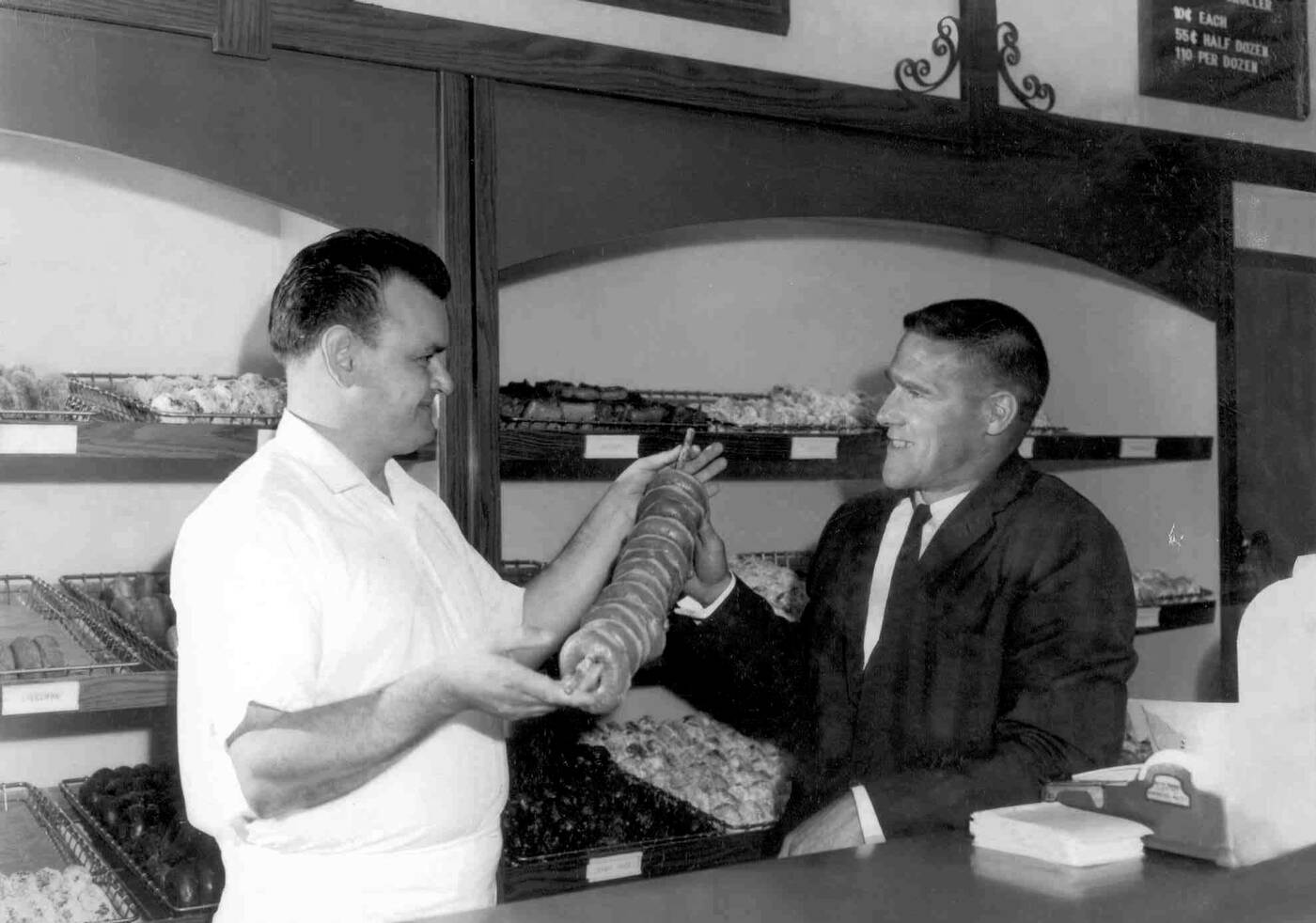 Joyce returned to the fold following the opening of a third store in Kitchener. He bought Lori's share of the company for $12,000 and the business was restructured again, making it an equal partnership between Joyce and Horton.

An arrangement stipulated the controlling share be held in trust and given to either Horton or Joyce in the event of the other's death.

On 1st June, 1970, Tim Hortons, now opening between one and four new locations a year, returned to Toronto with a location on The Queensway in Etobicoke, on the south side of the street between Royal York and Islington.

The store is still there, though it's been extensively renovated since it opened to resemble match the universal Tim Hortons bunker style.

Ron Joyce became the driving force behind the company in the early hours of February 21, 1974 when Horton - twice over the legal limit after an evening spent drinking vodka and soda - flipped his speeding Pantera sports car on the QEW in St. Catharines.

He was ejected through the passenger door and killed instantly. 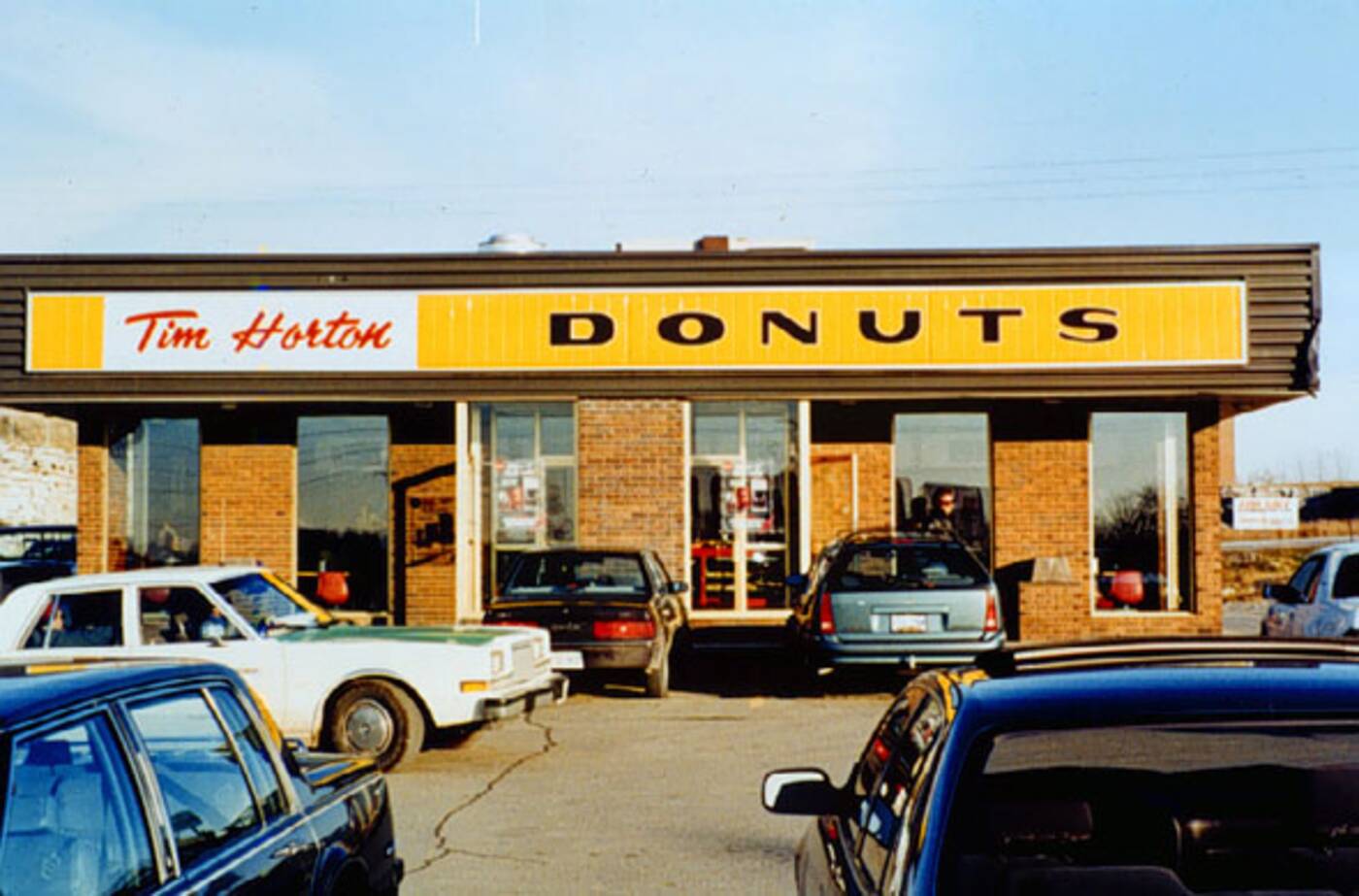 A typical Tim Hortons exterior in the late 1980s.  Photo via Tim Hortons.

Horton became "a ghost in the machine of the chain he founded" in the apt words of Douglas Hunter. A stylized version of his signature is still the company logo but almost no reference is ever made to the hockey star in promotional material.

According to Hunter's research, his image was only ever used briefly in the early Hamilton stores. For his part, Ron Joyce survived an acrimonious lawsuit by Lori Horton and guided the company to phenomenal growth.

Jim Charade died in 2009. Upon his death, Joyce heaped much of the credit for the early success of the franchise upon him in an interview with the Globe and Mail.

"Jim was the gambit behind the concept. He doesn't get enough credit, but I have always acknowledged him. Without him, it would never have happened."