The Museum of Contemporary Canadian Art is still seeking a new home a little over a year before it, along with two neighbouring galleries and an animation school, is due to be booted from its Queen West location.

"It's very unfortunate," says Councillor Mike Layton. "I've met with them several times, there's been a couple of possibilities but nothing concrete, but unfortunately the city has no say over the tenant at the current site on Queen Street."

David Liss, artistic director and curator of MOCCA, says it was always been part of the gallery's long-term plan to move to a larger building when the Queen West lease expired, but it's been difficult finding a suitable location or a space to build one.

"There are a couple of scenarios that we've been working on but it's a difficult property market in downtown Toronto," Liss says. The ideal building would be double the size and somewhere between Dufferin, Bloor, and the Don Valley, but the museum has struggled to find one that checks all the boxes. MOCCA is also in talks with developers about building a new home.

Developer UrbanCorp submitted the first draft of its condo proposal in February. 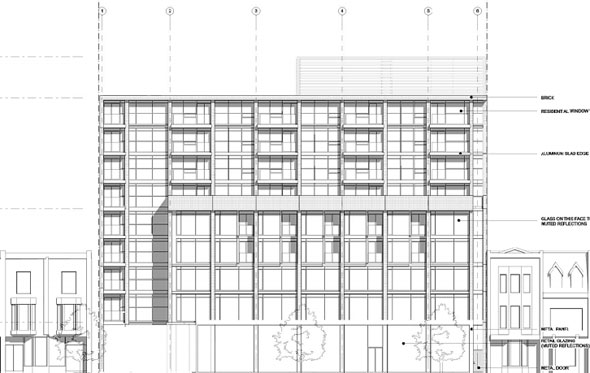 MOCCA, a non-profit, arms-length City of Toronto agency was formed in 1999 out of the former Art Gallery of North York. Its mandate is to exhibit, collect, and promote innovative art by Canadian and international artists. Its lease, like those of the surrounding galleries, expires on Dec. 31, 2014.

As it currently stands, the nine-storey condo would be built flush against the Queen West sidewalk, removing the existing multi-building layout. A total of 151 units, most of them one-bedroom, would be placed about 851 square metres of retail at ground level.

The 26.9 height is almost 11 metres over the current limit for that particular stretch of Queen West. City planners told the developer to scale down their plans but are still waiting for a revised proposal.

"The existing application is well outside what I believe would be an appropriate scale of building," says Layton. "What's on the books for that area is a mid-rise building, but having said that the mid-rise guidelines of the city set certain perimeters for how big a building should be and this building is well outside of them."

"It's a shame to see MOCCA go," Layton says.

"They're an incredible asset to the city and they're part of the very fabric of the community and that's why we're trying to find every of opportunity for them to remain within the community, in as far as we can."