Toronto city council has voted 36-5 to strip Rob Ford of the last remaining pieces of power and hand them to Deputy Mayor Norm Kelly.

In a series of heavy losses, Ford saw his office budget slashed by 60%, his position as chair of the executive committee taken away, and the last of his removable rights as mayor confiscated.

Ford was also unseated as a mandatory member of all city committees, leaving him largely a ceremonial figurehead.

During a heated and sometimes bizarre five-hour debate, Ford heard from councillors frustrated with the ever-deepening scandal and was occasionally heckled by members of the public. 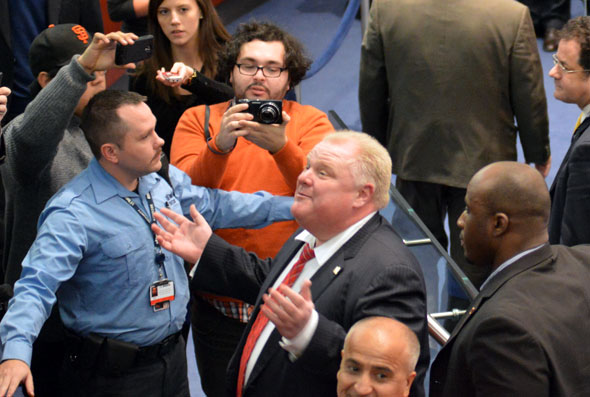 The debate frequently threatened to boil over. During one heated exchange, Rob and Doug Ford left the council floor to engage with hecklers in the public gallery. Rob, thinking his brother was in an altercation, rushed to the scene and bowled over Councillor Pam McConnell. He was later made to apologize for his actions by Councillor Paula Fletcher.

In the melee, Ford appeared to think the spectators were questioning his fiscal record. "Are you saving money? I'm saving money," he shouted. "You don't like saving money." There were further frustrated outbursts during the course of the meeting and security removed at least one spectator.

"We're saving millions ... is that affecting your grants?"

Cllr. Thompson lamented Ford's impact on the day-to-day running of the city. "It is not business as usual," he said.

A motion by Doug Ford that would have asked the province for a snap mayoral election was ruled out of order. 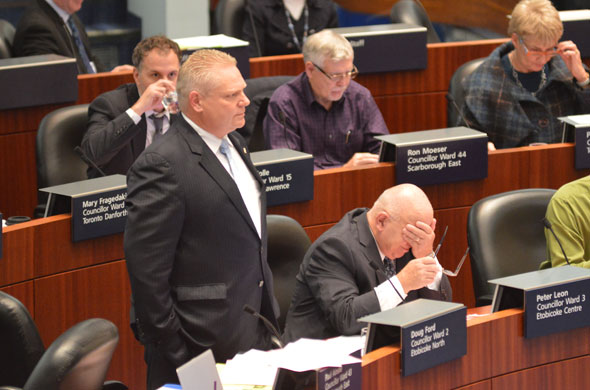 Rob Ford said the decision to remove his powers and slash his office budget was undemocratic and likened the action to the U.S. invasion of Kuwait.

"This, folks, reminds me of when I was watching with my brother when Saddam attacked Kuwait," Ford said before excusing himself from the vote.

"Mark my words, friends, this is going to be outright war at the next election. I'm going to do everything in my power to beat you guys."

Newly empowered Deputy Mayor Norm Kelly said he plans to meet with Ford this week. "The mayor apparently wants to wage war, I want to wage peace," he told reporters shortly after the meeting ended.

Cllr. John Filion, who brought the motion, said council's action probably won't curb Ford's antics. "Will the mayor act out and behave badly? Probably ... but it will clearly be Rob Ford behaving badly and it won't interfere with the work of council."