The great Toronto mirage of 1894

In 1894 Toronto was a small city of around 200,000. Its church spires dominated the skyline and paddle steamers chugged through its harbour. Massey Hall had just opened, a gift to the city from a farm equipment manufacturer in memory of his deceased son, and the Evening Star, a precursor to the Toronto Star, was just a few months old.

That year, on August 16 at around 10 in the morning, Buffalo woke to an unusual sight - it was Toronto, a town 90 kilometres distant as the crow flies, right on its doorstep. Looking north over land toward Niagara Falls and the distant city, which was easily visible from high ground around Lake Erie, it was as though the town had shifted over night to a point just on the horizon.

From what was written and reprinted via wire service, we know that around 20,000 people in the New York town saw Toronto in detail for around an hour. The church spires of the city, individual properties on the waterfront, and even side-wheeled steamers and sail boats in the harbour were all reported by witnesses.

It was "rendered perfectly," reported Scientific American. Toronto didn't appear to float or hang upside down, as mirages sometimes dictate - it simply sat there on the horizon, as it would were it much closer, and much larger. 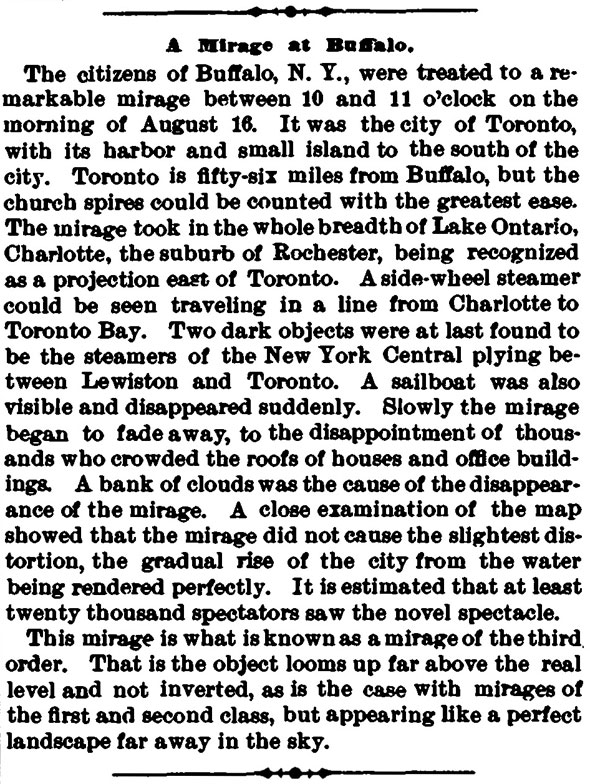 Though the 1894 mirage was well documented, it wasn't the first reported in the Great Lakes. In 1885, Toronto's Globe and the New York Times reported a "looming up" mirage visible from rooftops and high ground in Toronto, and suggested an air of familiarity with the phenomenon:

"Three narrow streaks of blue, the first apparently about 15 miles out from shore and the last about 10 miles down the lake, showed belts of water each apparently a few miles wide ... several houses on the water front at Niagara and the American fort across the water were visible. On the Sunday previous the air was clear and the spray of Niagara Falls was also seen."

In April 1871, the citizens of Rochester were treated to a prolonged view of the tree-lined Canadian shore of Lake Ontario for an entire day, according to reports. Frank Leslie's Illustrated Newspaper, an American publication that printed sketches of news events in the years before practical photography, recreated the event with the picture at the top of the page. 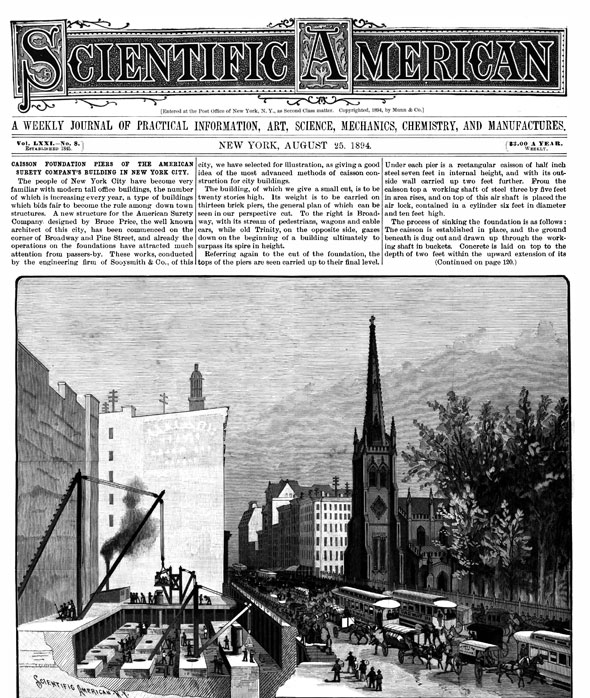 The mirages these accounts describe is known today as Fata Morgana, from the Latin for fairy. Ancient mariners regularly saw the visual phenomenon in the Strait of Messina, the narrow sliver of water between the toe of Italy and the island of Sicily, and believed them to be fairy castles luring them like sirens on to rocky shores.

Fata Morgana require very specific atmospheric conditions to occur. Because light from a distant object (the city of Toronto in the case of the Buffalo mirage) is bent when it passes through layers of air at different temperatures, images sometimes appear distorted or repeated to the observer.

This specific type of mirage, which sometimes gives the impression distant objects are close, appears as a shimmering band, or presents multiple versions of the same object, needs a temperature inversion - a layer of cool air below an area of warm air - to occur.

Arctic ice sheets or the flat plane of a large body of water in calm weather tend to lend themselves to Fata Moganas. Sightings abound on lakes Superior, Erie, Michigan, and both sides of Ontario.

"A suspended city has been discovered off Glacier Bay, Alaska, by a party of excursionists. This curious phenomenon is seen regularly after a full moon in June, and at no other time. It is said to be a beautiful mirage of some unknown city suspended directly over the bay. A photographer has taken a picture of it four times, but no-one has been able to identify one of the ghostly buildings outlined," wrote the Evening Star in 1894, just weeks before the New York event.

The 1894 mirage was, according to the accounts in Scientific American, Detroit Free Press, and, oddly, the Daily Argus out of Crawfordsville, Indiana, something of a whopper. Unfortunately, there is no contemporary visual account, only descriptions and a passing bank of clouds halted the spectacle around an hour after it started.

Luckily for us, Fata Morgana continue to appear when the conditions are right, so keep your eye out.

Thanks to Reddit user Miquelon for sharing the story.