That time when CKEY/590 was Toronto AM gold

Much like the music you hear played on them, radio formats are notoriously fickle and prone to constant change. For example, rising star Indie88 might feel as if it's been with us forever, but is barely a few months old.

Now occupying the 88.1 MHz frequency previously occupied by CKLN, whose fearless hip-hop show Fantastic Voyage aided the trajectory of Canadian hip-hop by shepherding the likes of Maestro Fresh Wes and Michie Mee, the arrival of Indie88's near perfect blend of new and old "alternative" cuts in the dead shadow of CKLN is just the latest in the long line of Toronto AM/FM makeovers, mergers, ownership flips flops and format changes.

The danger with radio has always been falling in love with a particular station only to wake-up one morning to find it broadcasting something entirely different.

What is now Chinese language CHKT/1430 on the dial was once CKEY/590, Toronto's "good as gold" easy listening station. Once a leading Top 40 competitor to powerhouse 1050 CHUM, CKEY went "MOR" (middle of the road) in 1965 and beefed up its news and editorial voice.

At one point in the '70s off the back of their stellar news team, rumours abound that CKEY would switch to all news, a novel concept which didn't end materializing in Toronto until CFTR transformed into 680News in 1993.

On January 1, 1984, CKEY re-branded to "Solid Gold CKEY", ditching the MOR format in favour of full fat soft rock/oldies, appealing to a growing tide of oldies lovin' baby boomers who were underserved in the Toronto market at the time.

While Boomer partiers gravitated to the harder nostalgia of Q107, amazingly not many stations were playing the likes of Motown, Bill Haley and Simon & Garfunkel. Anyone who visited a dentist's office in the '80s no doubt recall hearing the calming yet toe tapping sounds of CKEY.

Fierce competition from old rivals CHUM arrived in 1986 when they also switched formats to oldies, re-christening themselves as "The New 1050 CHUM AM. Suddenly Dentist's offices had choice, and poor old CKEY found themselves lagging (indeed, rock radio scrapbook refers to CKEY as a perennial bridesmaid).

On June 20, 1988, CKEY became "Key 590" and fully embraced the oldies format, jettisoning any remaining adult contemporary styling that had survived the rebrand as suddenly that format was crowded with the likes of CJEZ FM soothing out Toronto with easy listening jams. As the '80s drew to a close, CKEY was suffering a major identity crisis.

In March of 1991, CKEY became CKYC "Country 59", adapting a country music format which was flattened by a Dixie flag emblazoned Mack Truck the following year in the form of CISS-FM, Canada's first Country FM station.

By the mid 1990s, CKYC slid to 1430 on the dial, while sportsradio CJCL inherited the more listener friend 590. In 1997, country was dropped in favor of an ethnic format which stayed in one form or another to this day.

There are some great legacy sites out there that remember CKEY and go much deeper into the classic jocks and side-burned, plaid wearing characters that made it so memorable, including CKEY Memories which is pretty much the definitive collection of the station's colourful history. 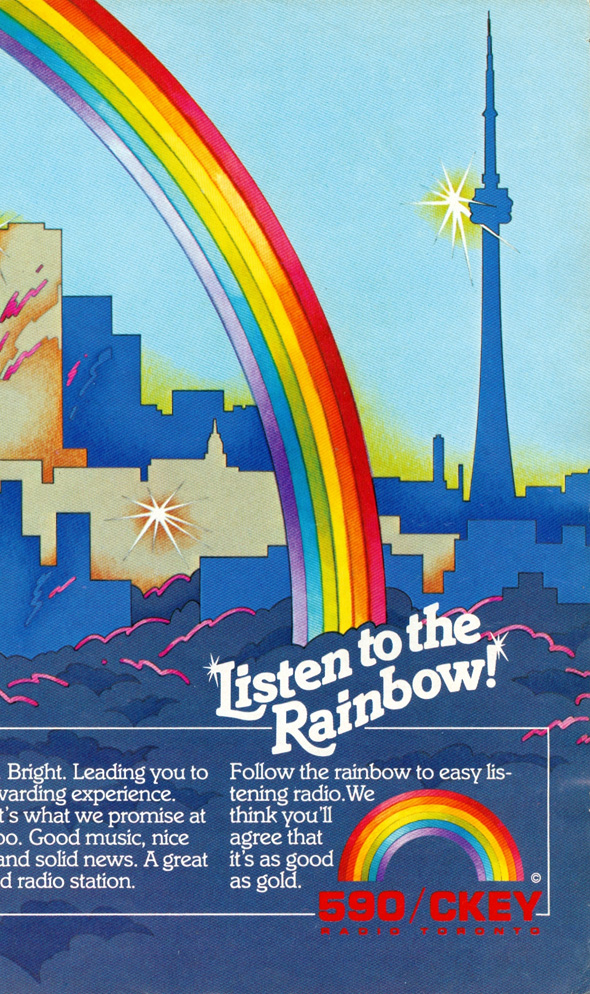 At its best, CKEY's rainbow over Toronto imagery summed up the good vibes their broadcast exuded, with smooth music, nice people, breaking news and humane commentary. Even all these years later, CKEY is missed on the dial.