Ripley's Toronto aquarium has finally opened at the foot of the CN Tower giving Toronto a bona fide tourist destination right at the heart of the city's tourism epicentre. It's unlikely that an inland city like Toronto ever really needed an aquarium, but now that it's here, we have one more place to send visiting friends and relatives, and a new destination for school field trips.

Delve deeper into the new Ripley's Toronto Aquarium in this photo gallery.

It was a splashy ceremony (no pun intended,) with acrobats and scuba divers and a buxom mermaid, and now that it's here it'll doubtless prompt a whole new debate about branded private enterprise building tourist attractions versus public money paying the way. (Which isn't to say that Ripley's didn't get any public money - this is Canada after all, and subsidies are how we roll.) 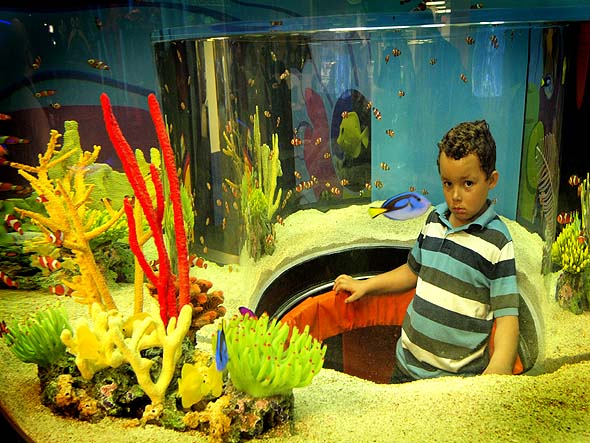 What a company like Ripley's brings is experience and flair and a keen instinct for how to make sea life - some of it rather sluggish and inert, just as much either ugly or dangerous - exciting. For the most part the animals on display aren't obliged to do anything to earn their supper except either swim or float. (Or, in the case of the Giant Pacific Octopus, hide.) With the aid of superb tank design and lighting, Ripley's has constructed showcases for a remarkable array of creatures, though in some cases all they really had to do was fill a vast pool with a stunning selection of healthy, well-fed beasts and turn on the lights. 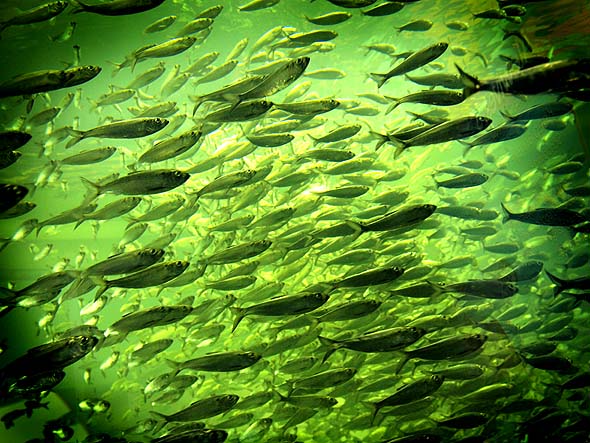 Moving in a descending corkscrew, the displays begin with our own Great Lakes, and the often-ignored wildlife they contain. The first visual showpiece is a circular tank full of alewives, those small silver fish that used to litter Lake Ontario's beaches years ago during massive die-offs. Alone they're not a terribly interesting fish, but in a huge, whirling school they're breathtaking, slashing and reeling in the light. 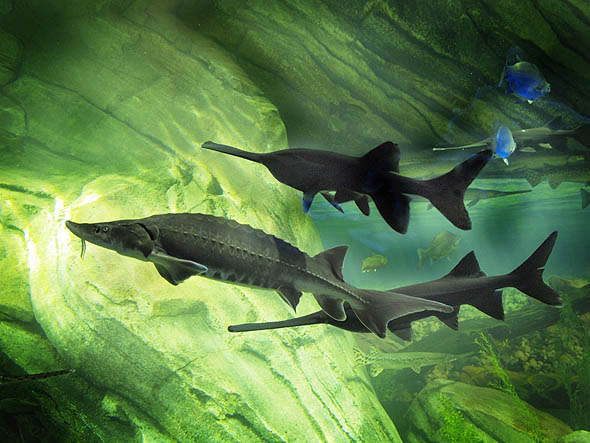 Our local lakefish are easy to ignore unless you've hauled one on to a boat or a dock at the end of a fishing line, but in many instances they're truly curious, especially big specimens like sturgeon, gar and paddlefish, all of which look like evolutionary cul de sacs, living on in our cold, murky inland seas like stranded fossils. 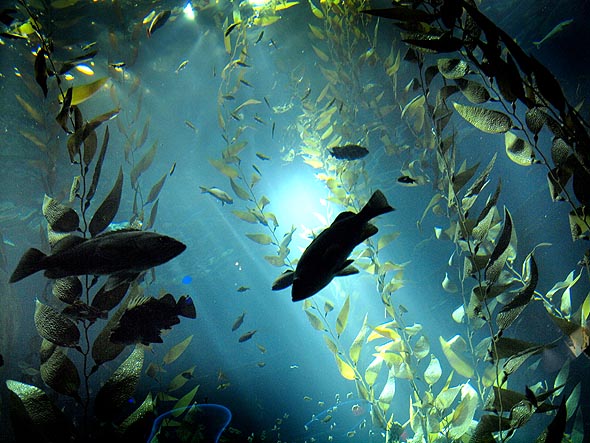 The displays move on to our coastal waters next, and those species that have been endangered by centuries of industrial fishing. The educational component in this part of the aquarium is high, but it's easy to get lost staring at the kelp forest tank, with its tall, waving fronds and multitude of fish either darting through patches of open water or floating in space, doing their best to look like part of the swaying, leafy thicket. 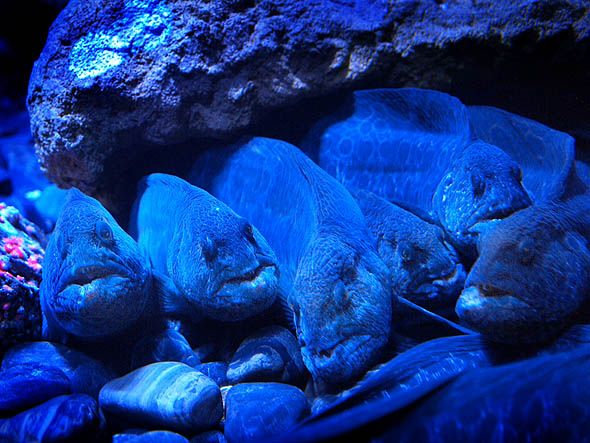 Small tanks showcase sculpin, lumpfish and rockfish, anemones and starfish - the weird, hidden beasties of the coasts. A tank of Wolf Eels feature malevolent-looking fish that seem fierce but are usually harmless, even playful. (Or so I am told.) Huddled together in little packs, however, they look like something waiting for its walk-on in some sci-fi horror film. 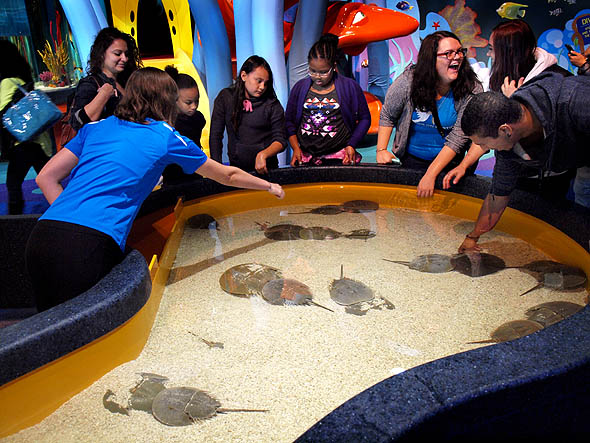 In the atrium, staff are on hand to help you get over your reasonable misgivings at the aquarium's petting zoo. Several creatures, including bamboo sharks, horseshoe crabs and even small rays, live in shallow tanks where visitors are invited to roll up their sleeves and touch. The hard shells of the crabs are hardly surprising, but the texture of the small sharks' skin - like dry leather - are a shock, as is the eagerness of the rays to swim gracefully to the edge of the tank and rub against your hand. (A staff member tells me that a few of the rays really seem to enjoy being touched, and eagerly circle the tank looking for hands in the water. I find this confounding.) 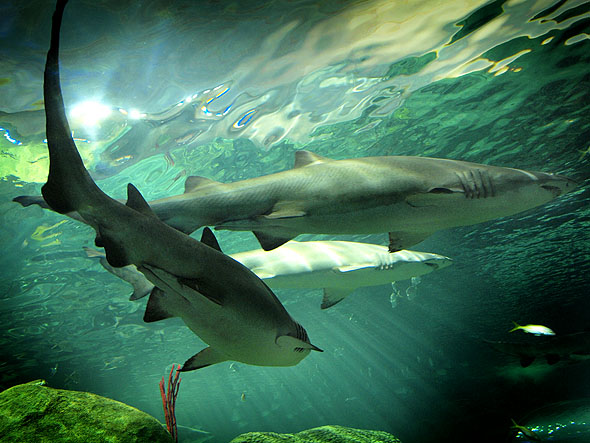 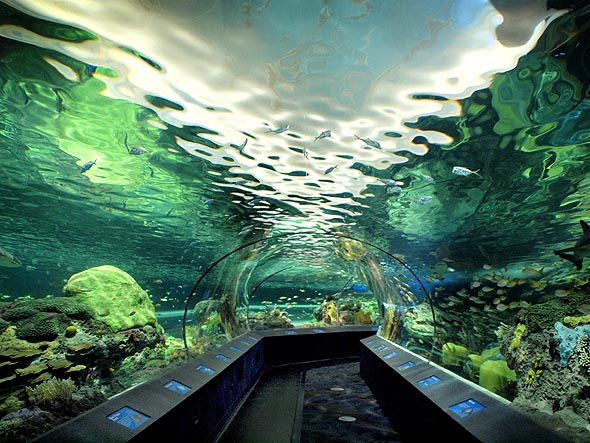 Ripley's centerpiece comes next - a group of saltwater tanks full of colourful reef fish as well as the swift and the deadly - the sharks and giant rays, sea turtles and sawfish, swimming in a huge tank complex with a long, clear tunnel running down its centre. It's where the sensory overload kicks in, your eyes darting around to study the sharks that loom into view teeth first, or the sawfish, improbable and nightmarish, lounging lazily on the plexiglass dome overhead. 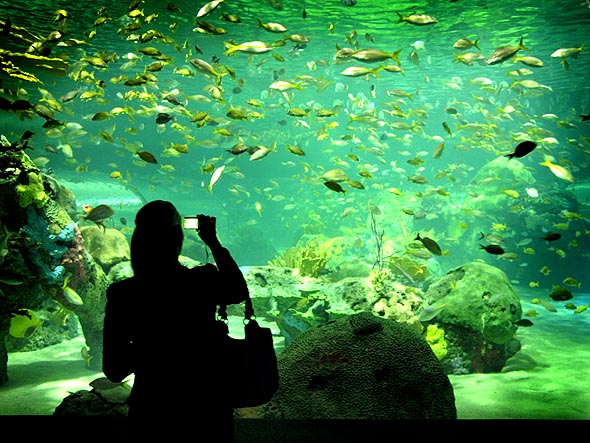 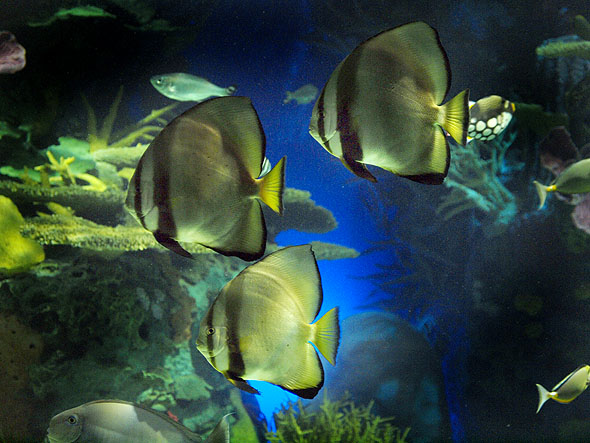 In the Rainbow Reef display, a trio of orbicular batfish swim back and forth across the glass in a stately parade. They're just one of the little details that make these display tanks mesmerizing; nearby, a murky tank full of cod and groupers, ranging in size from huge to monstrous, hold your attention as thy shift their ponderous bulk through the dark water, studying you with their keen, cold eyes as you stare back at them. 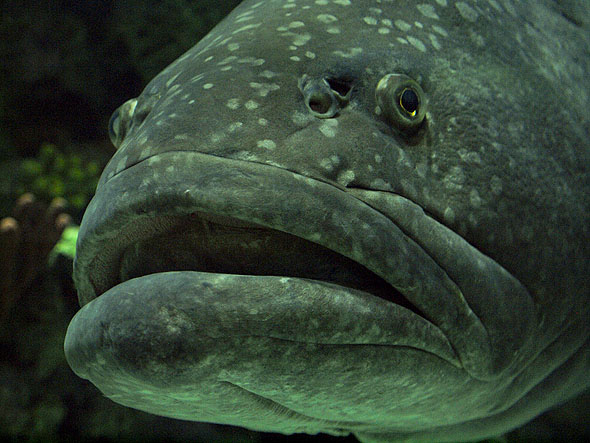 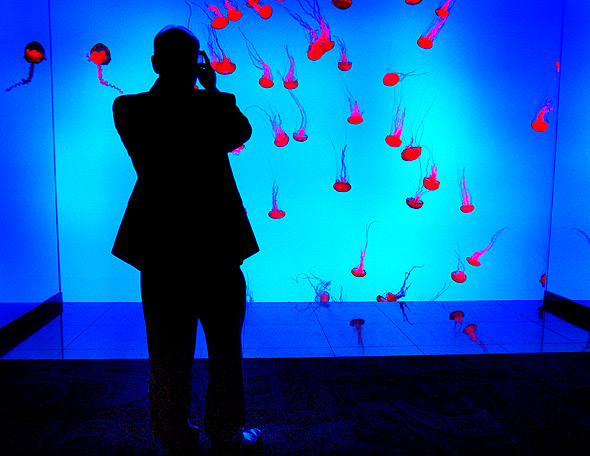 The seas are a mystifying, alien place, full of creatures whose size, strangeness or apparent menace are both unsettling and fascinating. Ripley's understands this, and ends the display with Planet Jellies, five tanks full of jellyfish floating in water-filled voids, picked out by careful coloured lighting. They're probably the weirdest animals in the sea, alive but only according to laws that defy the rules of land and air. 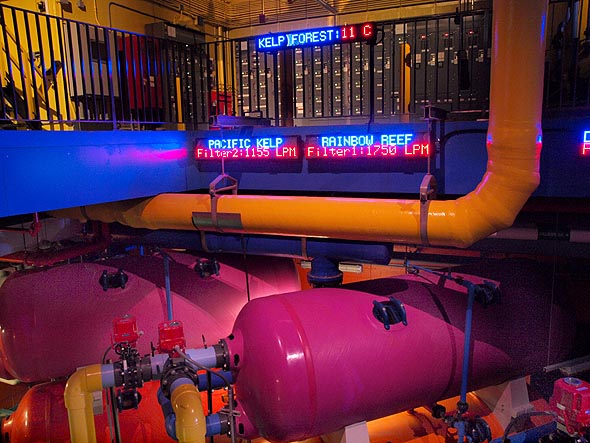 I could imagine someone spending lunch hours in this place, lost in the thick tangle of life in each tank, or the alien spectacle of the jellyfish, cuttlefish and sea horses. It would be an expensive lunch - adult admission is thirty bucks, twenty for youth and seniors and ten for children ages three to five. Ripley's Aquarium is the sort of place that turns everyone, even locals, into tourists, but perhaps they could offer half-price admission on slow weekdays for locals, maybe during the slow winter months, so that we can escape for an hour or two from the cold and grey and stare at a world that's both lovely and terrifying. 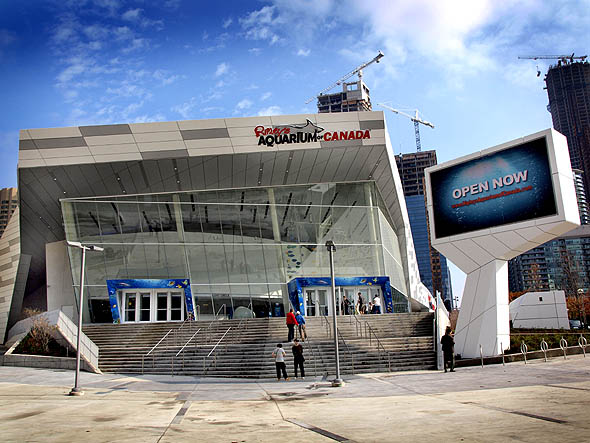