By the numbers: Toronto vs. Austin, Texas

Rob Ford is in Austin, Texas this week on a rare business mission. It's good timing, too - things haven't been looking good at home for Ford since the arrest of his friend and occasional driver, Alessandro Lisi, on drug-related charges.

Sadly, it's Ford's shenanigans outside city hall, and occasional lampooning on late night talk shows, that make him a very minor celebrity in the United States, as these Toronto Star talking heads attest.

"I'm going down there to create jobs and stimulate our economy and do what I was elected to do," he told reporters before his departure. "We have to sell our city and I'm a great salesman in the private sector and the public sector."

On Thursday, Ford signed a music city alliance agreement, a pledge to build trade and share industry knowledge, with Austin Mayor Lee Leffingwell. Since nothing says "friendly pact between like-minded cities" like an battle for superiority, here's how Toronto and Austin stack up in a few select areas.

TTC: The Toronto Transit Commission operates three subways, the Scarborough RT, 11 streetcar lines, and more than 149 bus routes from an operating budget of $1.5 billion funded by passenger fares (69%) and a city subsidy (27%,) and other revenue (4%.)

WINNER: Tough one to call. Capital Metro gets most of its cash from a seemingly uncontroversial sales tax and has a lower fare. The TTC, however, carries 528 million a year - an average of 189 trips per person, per year - to Austin's 33.3 million, or 40 trips per person. Toronto rides transit more but Austin is smarter about its finances.

TORONTO: Toronto is the capital of Ontario and the most populous city in Canada. Subjectively, as a tall poppy, Hogtown tends to take its fair share of flack, while Austin appears seems to have a pretty decent reputation in its home state and in the United States at large.

AUSTIN: Austin is the state capital of Texas but it sits 11th in national rankings in terms of population, just behind San Jose, California. If Toronto were south of the border it would be the third biggest city in the country, behind New York City and Los Angeles.

WINNER: No disrespect, cowboys, but Toronto is clearly more important to Canada than Austin is to the United States. Sorry. Size doesn't really matter, though. Both Toronto and Austin are havens for newcomers. The Texas city doubles its population every 20 years or so.

TORONTO: Each of the 45 members of Toronto City Council represent just over 60,000 people and have a direct say in how the city spends its gross operating budget of $9.4 billion, the total amount it spends from all sources of revenue.

AUSTIN: Each city councillor serves about 120,000 Austinites, double the number Toronto's councillors. The small team has an $3.3 billion gross budget at its disposal, around a third of what Toronto spends on its services, which is roughly in line with its comparative size.

WINNER: Austin has a smaller council, if you're in to that sort of thing. Other than that, it's almost impossible, and probably unfair, to make a direct comparison between the two governments and their spending. No result. 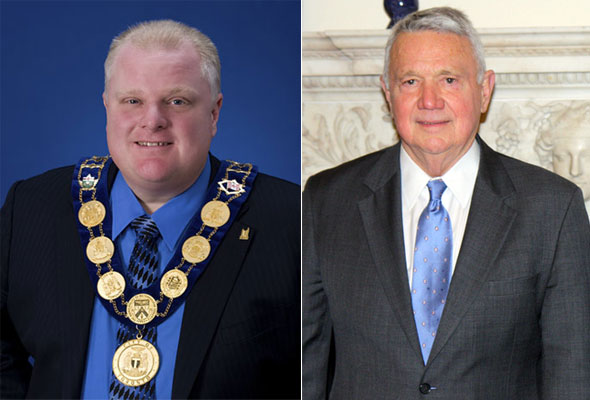 It's tough to choose a metric that would fairly compare Ford to Leffingwell, so brief biographies instead. Both were born in the cities they serve, both were councillors that were elected mayor. Leffingwell won a second term as mayor in 2012 and Rob Ford is currently preparing to stake his claim to another four years at city hall.

Austin's civic leader is a mechanical engineering graduate and former pilot in the United States Navy who served in Vietnam and later flew Boing 767s for 32 years at Delta Airlines. Rob Ford dropped out of a political science program at Carleton University after his sister fell on hard times and worked - possibly still works - as the chief financial officer for the multi-million dollar label and tag business his late father, philanthropist and Mike Harris MPP Douglas Ford, co-founded.

One area where the two crossed over is plastic bags. With the help of two city councillors, Leffingwell successfully banned single use bags from supermarkets and grocery stores in March this year. A lawsuit by the Texas Retailers Association was dropped in September.

Ford, well, not so much. He successfully killed off a surprise ban in June.

TORONTO: Since Austin doesn't have a major league ball club to call its own, I decided to consider both the Houston Astros and the Texas Rangers since the stadiums are roughly equidistant from Austin. Since 1977, the Jays have won two world series, two American League pennants, and five division titles (just don't mention the recent stuff.)

WINNER: Blue Jays win it. Given a point for each world series, pennant, and division title, Toronto comes out on top with nine. The Rangers and Astros tie for second with seven. Oh, and Rogers Centre holds the most people of all three ball parks.

TORONTO: The city's highest point is, technically, an anonymous patch of grass near Steeles and Keele. No plunging cliffs, no heart-pounding climbs, just a flat field that happens to be the highest point above sea level within our borders.

AUSTIN: Mount Bonnell can legitimately claim its title as a mountain. It has steep sides, a lookout point, rocky outcrops, and is higher above sea level than Toronto's entry.