This is what a new subway line looks like in Toronto

12 metres beneath the silty soil of Downsview Park, the TTC's 8.6 km, six-stop Spadina line extension is starting to take shape. Two giant circular tunnels, twisted out of the earth less than a year ago, now look less like a trunk sewer and more like a vital piece or transit infrastructure.

With two-thirds of all the tunnel work complete and the stations starting to take shape, the media was (officially) allowed inside the partially-complete subway for the first time since the groundbreaking ceremony in 2010. In three years, brand new Toronto Rocket trains will be thundering their way out of Toronto for the first time in TTC history. 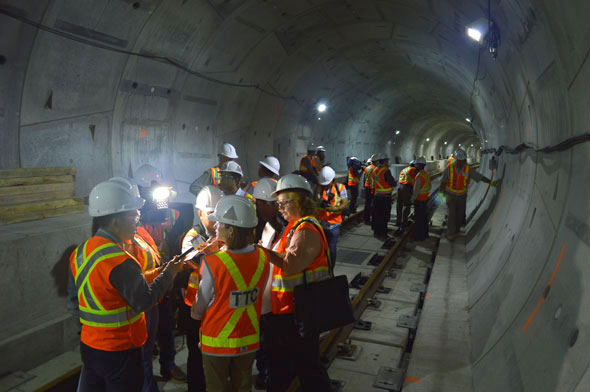 The northbound section of tunnel from Downsview Park to Finch West, known as the St. Regis Curve after a nearby street, runs in a sweeping arc underneath parkland, busy traffic on Sheppard Avenue, and a scattering of light industrial buildings on its way to Keele and Finch.

Because this part of the tunnel was located near the launch shaft for two of the tunnel boring machines (TBM), it was first to be structurally complete and fitted with two 1,800-foot ribbons of pristine, unpolished subway rail. 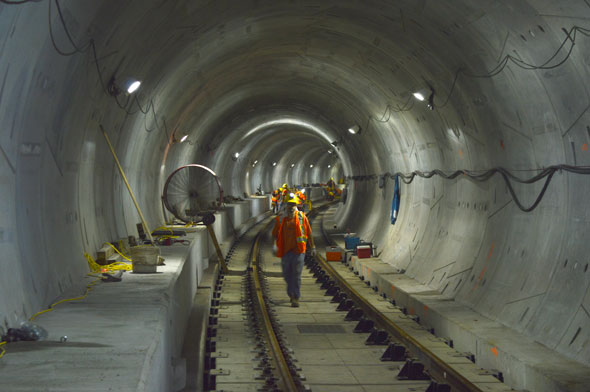 The TBM - nicknamed Holey - chomped its way through here in one-metre bites, carving out the soil with its giant corkscrew head and immediately lining the new space with grout and pre-cast segments of concrete. 2,066 of them - 54,000 across the entire line - keep the roof from collapsing. "It's a very cyclical operation," says tunnel engineer John Brown.

Tunnelling isn't the dust-choked, deafening experience it used to be. "The only interface [the workers] get with the soil is with the muck coming back, and that's treated with soil conditioner to get it in to a toothpaste-type material," Brown says. "Dust wise, nothing major. Noise wise, you don't need earplugs. It's just a drone - there's no crash, bang, wallop." 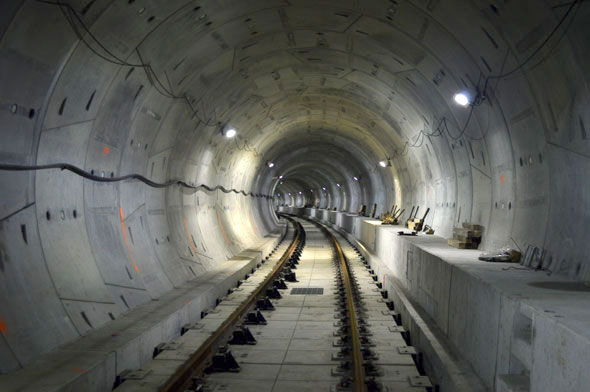 All being well, there won't be much noise on the surface when trains start running, either. The tunnel is fitted with shock-absorbing pads that reduce vibration on the surface. Under the York University campus, the density of the material has been customized to ensure lecture halls and study areas say silent.

The electrified third rail that will power the trains, radio equipment, signals, and wiring will be added in the next year or so. 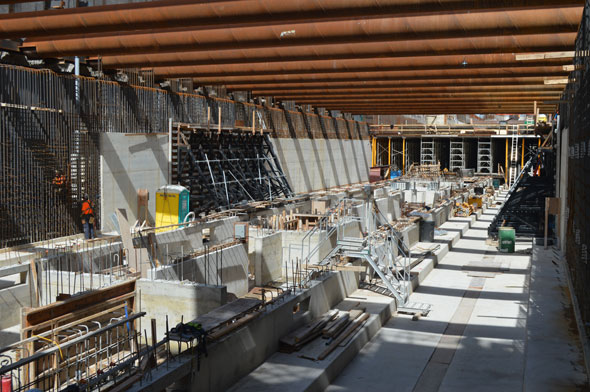 At Vaughan Metropolitan Centre, the end of the line, construction is complete on parts of the station box and the short section of storage track that will terminate the Spadina subway and provide links to York Region's bus rapid transit and surrounding buildings.

Simply digging the pit for the station was a major challenge. Special engineers and equipment had to be flown in from Germany because the high water table made removing the earth extremely difficult, like trying to dig a hole in the sand too close to the ocean. 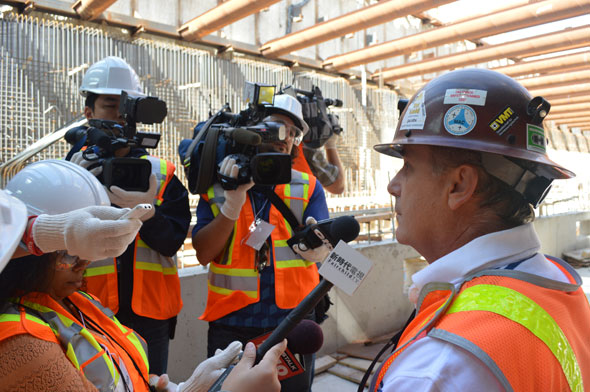 A little over three metres down, excavators hit water, and lots of it. "An underground lake," according to Dragomir Jevremovic, the construction site manager. As a result, the station box had to be lined with a special waterproof membrane and anchored in place to stop it floating upward.

The entire excavation is like a bathtub in reverse, the walls and floor displacing the water and saturated soil outside. "They're building a submarine," says Jevremovic.

The $2.63 billion line, funded by the federal government, the province, the City of Toronto, and York Region, is due to open in Fall 2016. 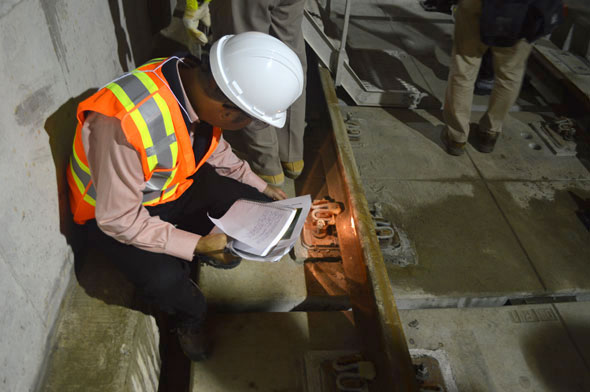 A reporter inspects a track tie. 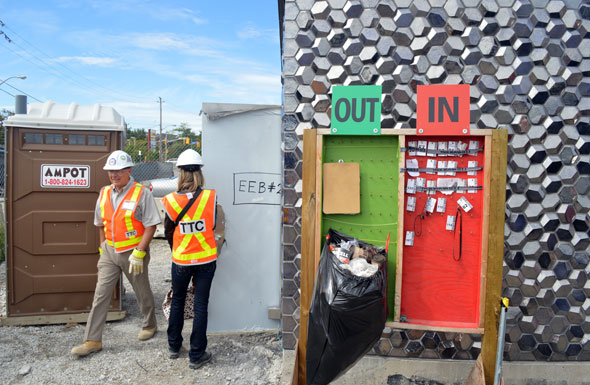 The emergency exit between Downsview Park and Finch West. 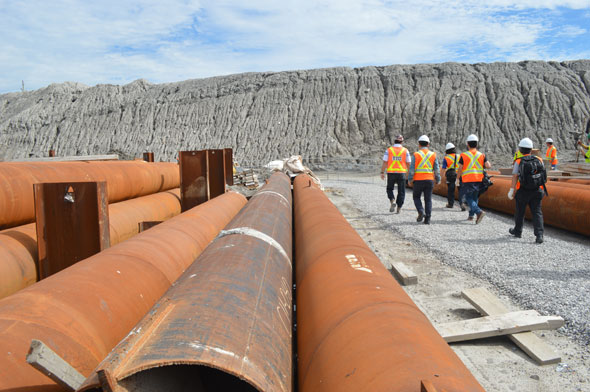 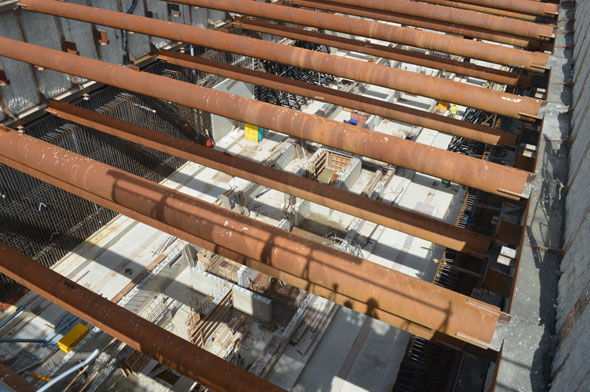 Looking through the structural supports in to Vaughan Metropolitan Centre station. 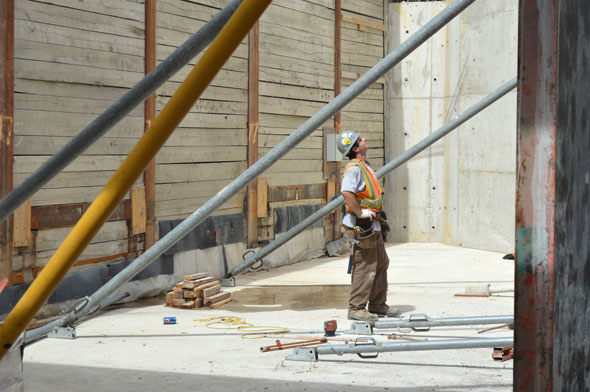 A worker on the mezzanine level of Vaughan Metropolitan Centre station. 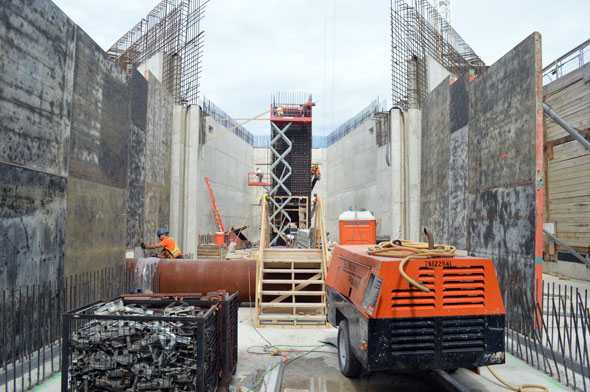 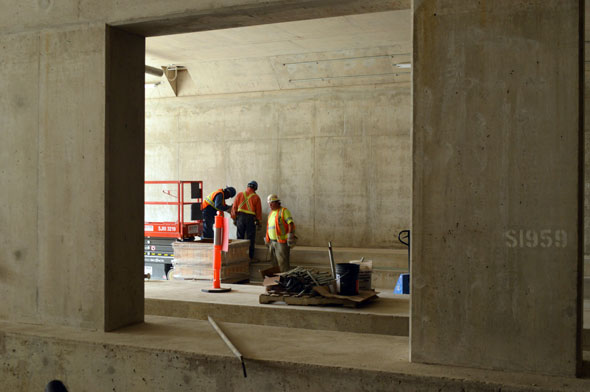 Workers in the section of storage track north of Vaughan Metropolitan Centre station.