The design for a proposed 65-storey condo at one of Toronto's busiest intersections has undergone its first, very minor, revision. The original copper-toned exterior is out and small balconies and Juliet railings are in, but Cadillac Fairview's giant residential addition to the Eaton Centre still has a long way to go.

The real estate corporation first pitched a high-rise rental tower at the Eaton Centre in May. Since then, Zeidler Partnership Architects has been making minor tweaks to its design while waiting on a mandatory community consultation, an early step in a long march toward a building permit.

At that meeting Tuesday night, which was worryingly devoid of any actual community members, Cadillac Fairview presented a slightly revised version of its giant cantilevered tower to around 15 developers, reporters, and other people representing vested interests. 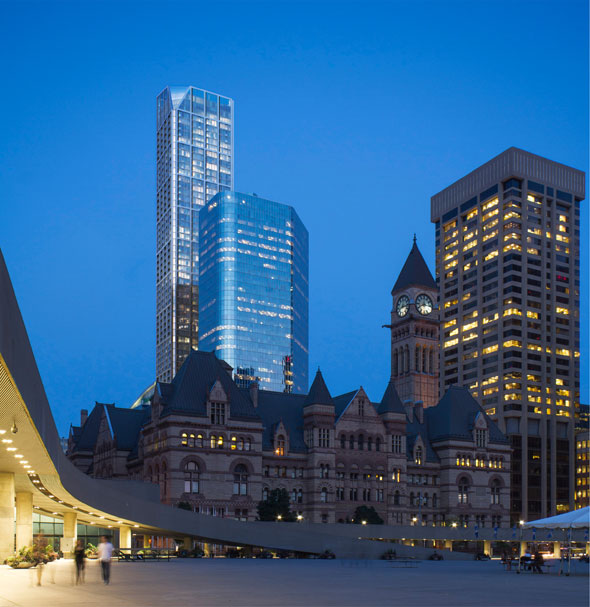 On paper, the proposal is simple: dismantle the heritage facade at 2 Queen West, currently home to Atmosphere, an outdoor clothing store, build a skinny 65-storey tower that bulges out around the fifth floor, and re-erect what's left of the damaged brick store at ground level.

In reality, the building still faces numerous hurdles. Its 220-metre height, which would put it roughly on par with the TD Centre, and lack of outdoor amenity space is a big concern for city planners. Despite its downtown location, density is also a factor. Its cantilevered design gives the tower more density (67 times coverage) than floors (65,) which would be a first for Toronto, were it to be built. 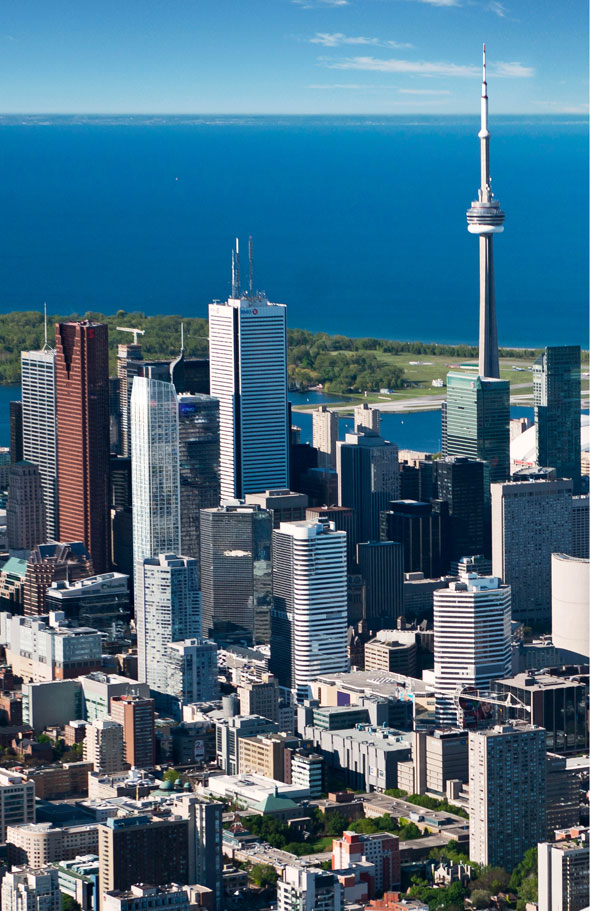 The design as it currently stands doesn't meet city requirements for outdoor amenity space or provide the ideal setback from Yonge and Queen streets. The possible shadow impact on Nathan Phillips Square and Trinity Square to the north was also cited as a concern along with the potential for long-term disruption during construction.

The existing heritage structure that would form the podium of the tower is also a factor. Studies of the brick revealed widespread spalling, a type of flaking corrosion, and damage from a botched cleaning operation. The aluminium cladding that currently wraps part of the building was added in the 1980s to shield against further damage to the elements.

It's likely that if the protected facade is rebuilt many of the pieces will be salvaged from elsewhere.

"I have some big concerns about what they're proposing on that small site," says councillor Kristyn Wong-Tam. "Not only are they not meeting the city's parking criteria by offering us no parking, but they're also not offering us much else with respect to community benefits."

"To build 65 storeys of rental housing and not have any of it even remotely affordable is a problem. Proposing a tower that has 67 times coverage is mind boggling...they have to work harder and we're very far from an approval, that's for sure."