Years of engineering expertise go into the design of midway rides, with their collections of gears and machined parts and wiring meant to stand weather and rough use and the strain of being broken down and re-assembled every week or two. But for many people, the most terrifying ride at the CNE this year will probably be a trio of metal ropes strung between two scaffolding towers. It's the simplest, and the most terror-inducing experience, and at the media preview this week, you could get looks of respect and pity if you said you were going to ride it after filling up on Cronut Burgers and Nutella Fries.

President's Choice Financial is the sponsor of the zip line ride set up between BMO Field and the Direct Energy Centre, which begins with a walk up the 10-storey scaffolding tower by the soccer stadium. I'd be lying if I said it wasn't the most awful part of the whole experience, and that at the end, I wasn't happy to throw myself off the top just so I didn't have to go down again. 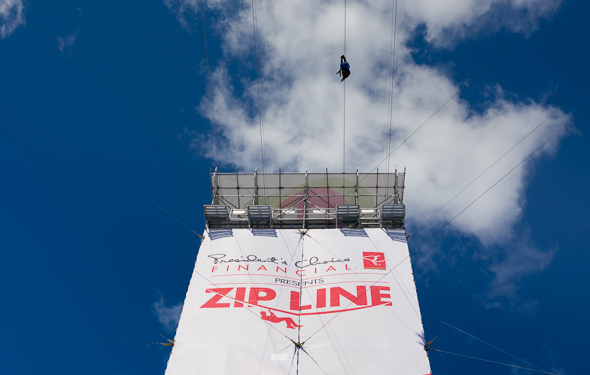 Zip lines are probably as old as the first long piece of rope, and are common in areas where nobody has the resources to build a bridge, or where the population is predisposed to playing chicken with their death wish. Since they aren't as intrusive as bridges or walkways, they're a standard part of eco-tourism these days, which is probably why Vancouver's Ziptrek Ecotours was given the job of running the one at the Ex this year.

The zip line will cost a separate ticket and is not included on the Ride All Day pass, and goes for $30 online. Once you enter the base of the tower to get kitted up (after filling out a PC Financial survey and a waiver, naturally) you get to choose whether you want a GoPro camera on your helmet to record (for an extra charge) your descent. The cameras either face forward or record your face; I chose not to commit my reactions to posterity. 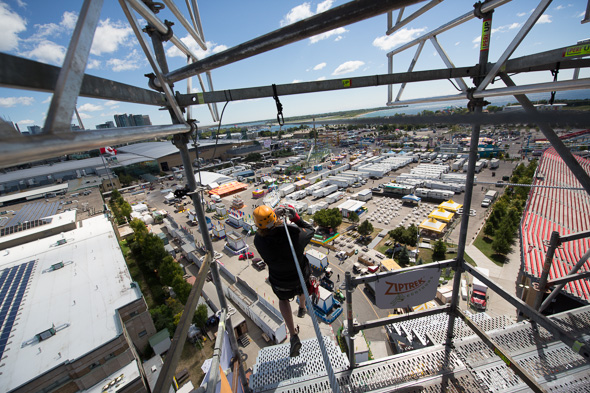 The longest zip line in the world is in Nepal, a reported 1.8 km dropping 610 metres, reaching a top speed of 75 miles an hour. The CNE zip line is shorter - 1,100 feet, which is still the longest zip line I've ever been on, and takes about 30 seconds to go from top to bottom. A dollar a second - you decide if that's worth your money.

For many people no amount of money could persuade them to walk to the top of the scaffolding tower, never mind jump off the top held up by a steel cable that looks remarkably slender at the peak of your panic. Because panic is what you'll feel as you stand at the top, secured by your harness to the trolley that will hold you up when you slide down.

Zip lines are safe - or as safe as can be expected - but it doesn't do the fear of sliding down one justice to call it "irrational." There's something very rational about not wanting to walk off the edge of a cliff or tower and hope that the bargain the steel cable and the line's builders have made with gravity will pay off. Riding a zip line - or jumping out of an airplane with a parachute - requires you to counter your wholly rational fear with an only slightly irrational justification that everyone has done their job and both ends will respect the terms of the bargain. 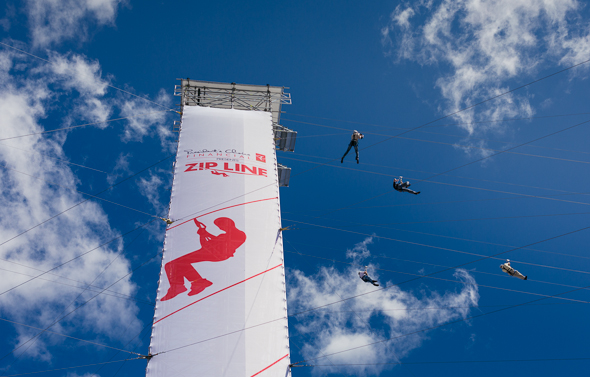 The first step, as they say, is a doozy, and if you watch the video of my descent down the CNE zip line you'll notice that I try not to think about it too much. One step, two steps, sit down, go. After that, you're at the mercy of the bargain, and it's best to just enjoy the scenery.

The worst part of the experience - after the walk up - was the waiting, which for some reason took minutes after my GoPro had been switched on. I'm assuming that there had been some pee and poo happening with the zip line rider in front of me, so I had a lot of time to look around and try to sound nonchalant. Listening to my voice, I'm not sure I was entirely successful. (Fast forward to 3:40 on the video to skip past the agony of waiting.)

No matter how long it is, a zip line ride is always too short. Once you've gotten over the urge to let go with a shout in defiance of nature and gravity - a waste of time, as far as I'm concerned - there's only seconds left to savour the chance to soar somewhat heavily above the ground, accompanied only by your own breathing and the whine of the trolley on the cable over your head. If you have more money than sense, I'd recommend doing the zip line twice - the first time to conquer your fear, the second to take it all in calmly. 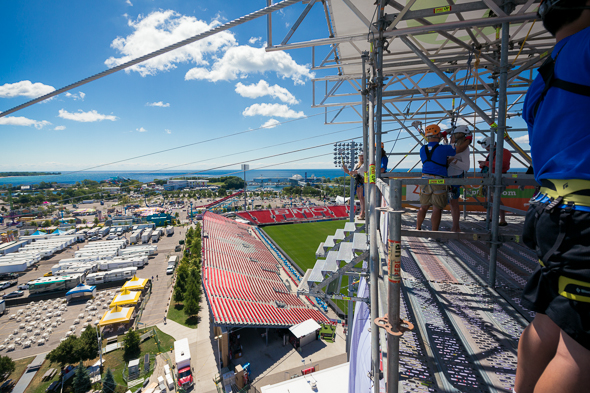 It all ends with a rude bump as the trolley hits the arrester at the end and you're pulled into the short tower by the southwest corner of the Direct Energy building. The bad part is that it's over. The good part is that you're just by a beer garden when you exit, so you can get something to calm your nerves and lubricate a little bit of bragging.