Remembering the massive Toronto blackout of 2003

On August 12, 2003, at precisely 4:11 p.m., Toronto was unwillingly thrust back to the dark ages as a rolling blackout, triggered in the United States, swept through the city and large parts of the province.

It was 10 years ago this afternoon that Toronto walked home from work, salvaged some food from the refrigerator or shopped for canned goods by candlelight, and joined friends and neighbours in the street for a talk about the worrying developments over a warm beer.

The blame for the gigantic outage was initially leveled at a fault in Ontario, but subsequent inquiries would trace the source to a stretch of road in suburban Ohio and underscore troubling frailties in the U.S. and Canada's electricity grid.

August 2003 had been a scorcher. Hot weather and heavy demand for electricity had put the local grid in Ohio under unusual strain, causing power lines to sag into overgrown trees and short out.

When the Eastlake coal-fired station near Cleveland went offline it was like knocking over the first in a line of 50 million dominoes.

One by one, power stations across the northeast U.S. became overloaded trying to compensate for those down in neighbouring areas and automatically powered off. The blackout rolled northeast from Ohio, round Lake Eerie into Ontario, knocking out power to cities and towns as it went.

50 million people were left without power in the United States and Canada when the blackout finally stabilized. 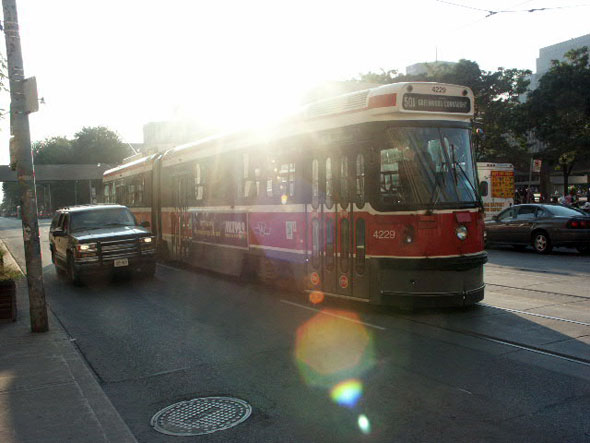 Here in Toronto, traffic lights stopped working, streetcars were marooned where they stood and the subway ground to a halt, forcing passengers to take to the tunnels. Office towers went black and streetlights blinked out, forcing drivers to rely on their headlights to navigate around the city.

The power started to come back on the next day but it would take much longer for all of the 12 million customers in Ontario to get their electricity service back.

Do you remember what you were doing when the power went out? Did you have a blackout party? We asked our Twitter for stories this morning but it's not too late to contribute. Let us know where you were and what you did in the comments section below.

Here are some of the best responses so far: