The founders of Ontario Bread Co. Ltd. knew which side their rye was buttered. For 78 years, the little factory, tucked down a laneway off Ossington Ave., churned out Polish-style Mazowieckis, kaiser rolls, egg breads, and babkas, on its way to becoming the busiest bakery of its kind in Canada.

Now, sadly, it's gone for good, a victim of slowing sales and changing local tastes. But before the ovens were switched off for the last time, filmmaker Jim Bachalo produced a moving mini documentary inside the bakery's timeworn walls, capturing for posterity the small group of staff who helped guide each loaf from dough, to slicing, and bagging.

"I thought it was important to do something before they closed," says Bachalo. "A lot of these places go unnoticed and they're here until they're gone."

"It was a very old-world style of bakery, so it was a lot more chaotic than I expected, but there was definitely a rhythm to the flow of things because they've being doing it so long, for so many years. After spending a few days watching them I got a sense of their habits and so on."

Founded in 1935, the bakery hit its stride in the post-war years when thousands of new immigrants from Poland and eastern Europe came to the area hungry for a taste of home. Since then, times haven't been so good. The business went in to decline, reducing its staff and output, and eventually closed for good earlier this summer.

Three of Ontario Bread's staff made headlines in 2011 when they split a $50 million Lotto Max jackpot. True to their hardworking form, the long-time staff kept their jobs until replacements could be brought onboard.

The little movie is a powerful farewell to a lost neighbourhood institution that traced its roots back to the days of horse-drawn deliveries. The recipes and the Ontario Bread name survive out in Missisauga under the control of Jaswoj Bakery, but the days of local, European bread on Ossington are now over.

"It's an interesting part of Toronto's culture that has strong European roots," says Bachalo. "It's sad in a way to see it go." 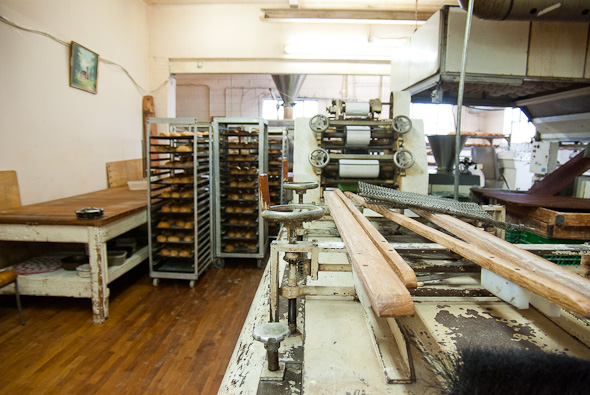