Scarborough to get a new subway but only if Feds help

Subways, subways, subways, folks. Scarborough is getting subways. After a marathon and sometimes confused debate, city council has voted 28-16 to extend the Bloor-Danforth line three stops east to Sheppard Ave. via Scarborough Centre and nix plans for a fully-funded LRT.

The decision means the existing RT, which is approaching the end of its working life, will continue to operate beyond the planned 2015 shutdown date until the 7.6-kilometre subway extension is finished in the early 2020s. It also means the 48-month shuttle bus period that would have been necessary with the LRT will also be avoided.

There are still numerous question marks around exactly how the subway will be funded. The now-dead 7-stop LRT had already cleared many of the planning hurdles that now face the subway, including environmental assessments and financial agreements between the local, provincial, and federal governments.

An amendment by Cllr. Joe Mihevc makes the extension contingent on the province chipping in $1.8 billion (in 2010 money) and the federal government agreeing to cover half the net capital costs. It also stipulates that no money be taken from the Sheppard, Finch, and Eglinton LRT projects. 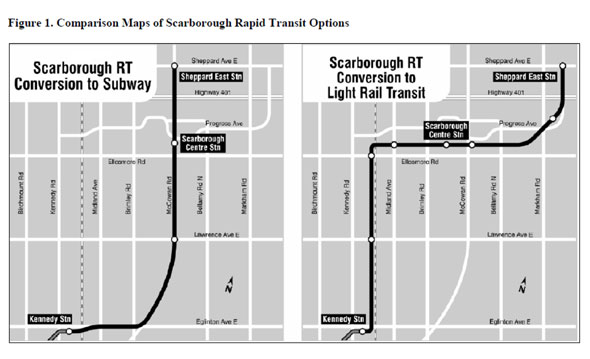 Another potentially critical caveat added by Cllr. Paula Fletcher means the other levels of government will have to commit funds by 30 September or have the line revert back to an LRT. TTC Chair Karen Stintz originally estimated a decision would come in January at the earliest.

"Scarborough residents don't feel their voices have been heard," Stintz said before the vote. "Now for the first time have a plan in front of us that is a subway that can be funded."

Rob Ford had hoped to limit the city's financial contribution to money gathered from a 0.25% annual increase in property taxes but that motion was defeated 21-23. It's not clear yet exactly where the city's contribution will come from.

Yesterday's debate was marked by one particularly lively exchange between Cllr. Josh Matlow and Rob Ford in which the mayor appeared not to know how the proposed light rail line would be situated. "It does rip out traffic lanes," Ford said of the grade separated route. "LRTs go down the middle of a road, they tear up your roads," he said to incredulous jeers from the chamber.

What do you think of the decision? Is a subway to Scarborough the best result even if it costs more and takes longer to implement? Are you concerned about the delay?