Giant condo project could change the face of Yorkville

Things have been very quiet around 2 Bloor Street West for several years, almost too quiet. In January 2010 the city granted an Oxford Properties project zoning approval - the right to put up a building of a certain height and footprint - but an appeal to the Ontario Municipal Board from local residents put the brakes on the idea before aesthetics could become a factor.

Now, over three years since the plans first surfaced, things seem to be heating up just a little. A set of digital renderings released online by Architects Alliance show in greatest detail yet what Oxford is planning, even if the company is distancing itself from the images. 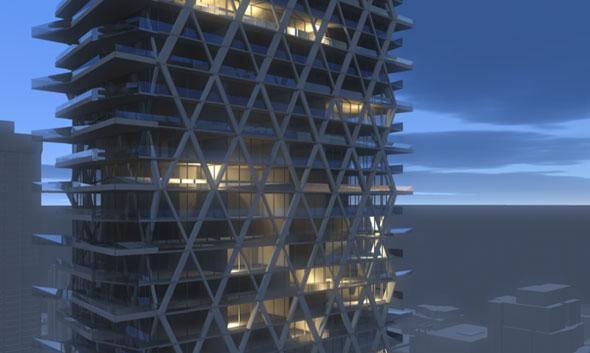 As the VP of development for Oxford Properties, Johann Schumacher, is keen to point out, the designs depict a very early concept for the L-shaped Yorkville site stretching from Bay to Yonge and down to Bloor. He says almost nothing is certain at this stage, including the status of the CIBC tower at Yonge and Bloor.

Oxford owns the 34-storey CIBC building and could, if they wanted, pull it down to make room for one of its two proposed new towers. Were it to be demolished, it would be the tallest building ever pulled down in Toronto's history, but that doesn't mean it will actually happen.

"In working with the city planners we don't have any immediate plans to go demolishing that tower," Schumacher adds. "This is one of many options we've looked at on that site."

What we do know is this: Oxford has basic consent for two towers, 125.3 and 162 metres, one possibly mid-block and one closer to Yonge. The existing shopping mall located on the south side of Cumberland St. will likely be demolished and replaced with new retail.

Pushing ahead with the project could have consequences for another proposal currently working its way through the approval process. An 85-storey condo planned for the current Holt Renfrew site could mean three extremely tall residential buildings appear on the same block before 2020.

It's a particularly challenging piece of land to develop. The site is directly above the Bloor-Danforth line and would require creative structural supports to make it viable. The lack of underground space also means many of the development's amenities will likely be located above ground.

Oxford, however, says it won't make a move until the market conditions are right. The next step toward realizing their designs would be to submit a detailed site plan application to the city. At that stage, we would get a more detailed look at what's in store.

What do you think of the sudden increase in activity on this block? Is it an appropriate area for high-rise residential towers? Would you be sad to see the CIBC tower go?