The Yarmouth street-elephant gets a facelift

Sally the elephant has been lurking behind a cherry tree on James Lawson's Yarmouth Road front yard for close to a decade. In that time she (the life-size model is based on a female Indian elephant) has been hit with all manner of tempest - hail, wind, rain and snow - even the odd scribble of graffiti.

The wear of so many years outside had faded and weakened the plywood and fibreglass construction. But, no matter, the local landmark is getting a complete overhaul, including a thorough cleaning, a dash of plaster filler, and a lick of white paint. 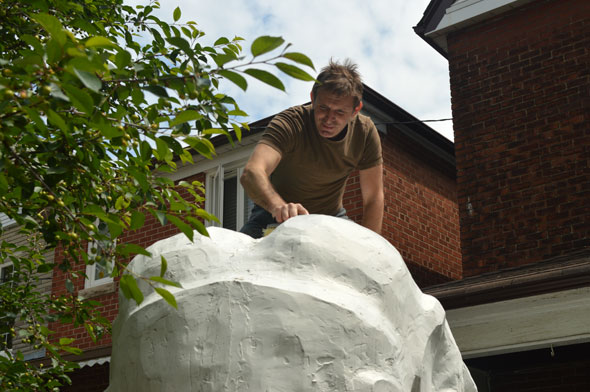 Sally was once the central figure of "An Elephant in the Room," the OCAD thesis of artist Matt Donovan, which included a flock of black sheep and a red herring. With the show over, the white elephant (she didn't get her name until later) spent several months in pieces in his parents' basement before Lawson came to her rescue.

"I had said that if he ever wanted to get rid of the elephant I'd be delighted to put it in my yard," Lawson recalls. "I had just bought the house the year before we put it out there. The fact I had the power to do something like that delighted me, and I was young enough not to really consider the implications in terms of neighbours," he laughs.

"I informed my then-girlfriend, now wife, that we were getting the elephant. She said: 'what elephant?' She had no idea what I was taking about but she was remarkably indulgent."

The neighbours were surprisingly welcoming the day Sally appeared, perhaps because the area is something of a magnet for eccentric exterior design. A lavish Greek palace stands on nearby Shaw Street and the famous "woodcake" house, covered almost entirely with circular slices of pool cue, is also close by. 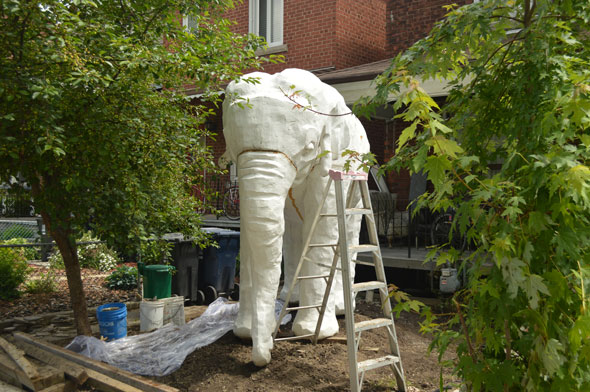 Despite her age, Sally's blank, staring eyes and melancholy expression still attract a relentless stream of visitors. During my short visit people took pictures, slowed their cars, and wandered in off the sidewalk to ask Lawson the same questions he's been hearing for close to a decade. Namely: "What gives?"

If the attention is a problem, Lawson never shows it. He gamely answers queries and chats like he's never been asked why there's a giant pachyderm lurking among his shrubbery.

Though she takes up the entire front yard and her gigantic flank blocks much of the view from the porch, Sally has become something of a local mascot. Over the years beads, cash and even a handful of confessional notes have appeared by her trunk like religious offerings or coins in a wishing well.

It's that powerful emotional attachment that gives Lawson the sense he doesn't entirely own his epic lawn ornament any more. "It's neat to think the elephant has its own life and people have their own relationships with it because it's not informed by the artist's vision of it," he says. "They've got their own idea of what the elephant means."

Sally's expected to be back to her former glory, complete with fresh turf and landscaping in the next few weeks. All being well, she'll be on Yarmouth Street for years to come.