Is it time to make King and Queen streets car free?

It's been floated before - several times in fact - but TTC CEO Andy Byford says it's time to make King and maybe Queen Street transit-only during rush-hour if new streetcars are ever going to realize their potential.

Here's the idea: by cutting cars, trucks, and other vehicles out of important stretches of the downtown core during busy transit hours, streetcars could get through without bunching up behind turning motorists and other obstructions. Taxis could be exempted, perhaps, and Byford thinks the plan could work in one direction only.

As it stands, private automobiles are technically banned from driving in the streetcar lane during rush-hour but enforcement is sporadic at best. The TTC is also discussing traffic cameras to nab rule-breakers.

Speaking to the Toronto Star, Byford said the routes are plagued by chronic bunching caused by other vehicles blocking the tracks and poorly-timed signals. "Is it not time to revisit - just as a study - the political and public appetite for a 7 a.m. until 9 a.m. transit-only-in-one-direction road, and displace the traffic elsewhere," he asked.

To that end, TTC Karen Stintz will motion the TTC board to investigate the feasibility of such a plan at the next meeting on Monday evening. 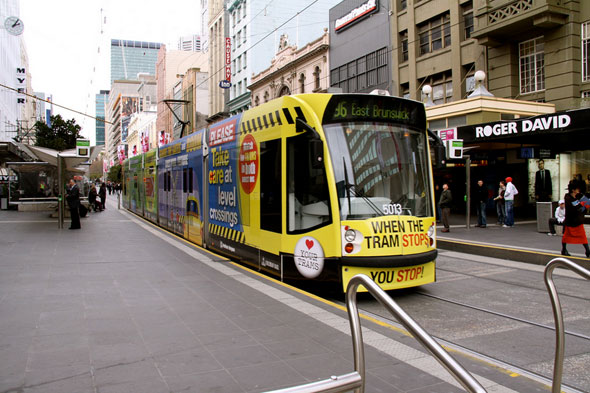 There's some precedence for this. Melbourne, the city with the largest tram network in the world, runs its vehicles in parts of the downtown in dedicated lanes. Outside, there are marked tram lanes that become transit-only during rush-hour periods. There, the problem of turning traffic blocking intersections has given rise to the unusual hook turn.

It's all talk right now, of course, but what do you think of the idea. Could it work in Toronto?