By the numbers: TTC subway delays

Every Torontonian has a TTC horror story: trapped on an overflowing platform unable to board an already full train, packed tight in a stationary car for a delay to clear, paying a fare only to find the line is out. I could go on, but you already know how it goes.

After finally getting released from a queue behind a disabled train only to be stymied a few moments later by a passenger assistance alarm, I thought it worthwhile to dig into the TTC's official records on outages - technical faults, track fires, belligerent riders, weather, the whole lot - in the hope of getting a bigger picture of what a year of problems looks like on paper. 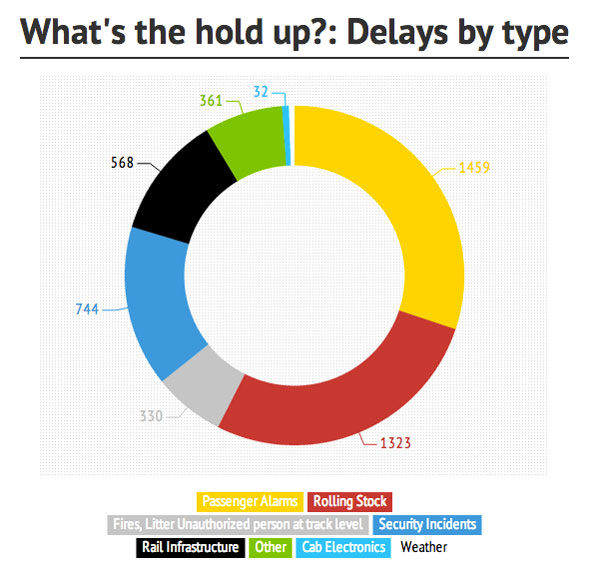 It turns out, maybe not surprisingly, that passenger assistance alarms were most common type of stoppage. The yellow buttons inside the cars were pressed 1,459 times in 2012, an average of almost 4 per day. The lost time over the course of the year added up to 118 hours and 14 minutes. Each time TTC staff were forced to respond it took an average of 4 minutes 51 seconds to get things moving again.

The TTC counts incidents that involve the police separately, labeling them "security incidents."

Just behind passenger alerts was the TTC's own train problems. The rolling stock - a technical name for the trains - needed emergency repairs 1,323 times in 2012, causing 109 hours and 49 minutes of delays. 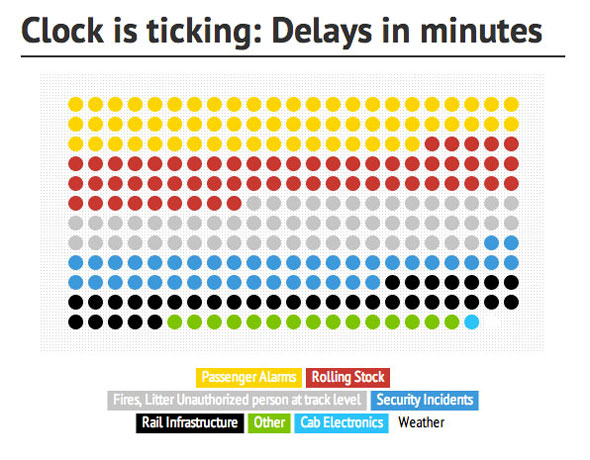 Frustratingly, the problem that created the worst wait times is almost entirely preventable. 330 small fires, litter problems, and unauthorized people at track level stopped the subway for a total of 106 hours and 37 minutes in 2012. Each incident took an average of 19 minutes to resolve - longer than breakdowns and assistance alarms.

In total there were 4,842 outages on the subway in 2012 that caused more than three weeks of delays (509 hours and 35 minutes to be precise.) The average delay across all types took 6 minutes and 31 seconds to clear, which is longer than the 4-minute average headway between trains. Normal scheduled service often takes longer to resume. 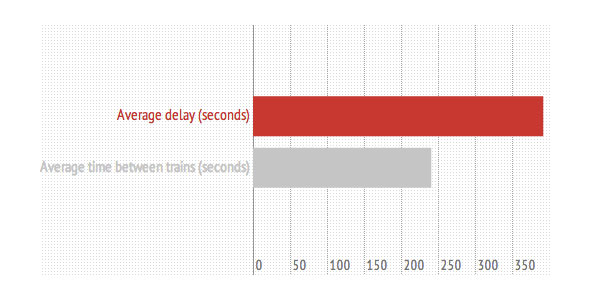 Are you surprised by these figures or do they match your experience of using the subway? Could the TTC do more to prevent track fires or is it up to the rider to use the garbage cans? Sound off below.

Note: The average wait time listed in the last chart was calculated across all lines from the most recent service summary report between March 31 and May 11, 2013. The delay data is from 2012.