The past and the future of Mount Dennis

Last weekend's Jane's Walk featured many worthy destinations, but I was compelled to join the walk in Mount Dennis, focused on the Eglinton LRT line that will have its west end terminus there, once the two massive tunnel boring machines being built there finally emerge at the eastern end of this massive - and long overdue - project. It's also the neighbourhood where I grew up, my family's home since before World War One, and an area whose decline had almost become terminal.

Unless you grew up there, most people don't know where Mount Dennis is, and once upon a time I would have explained by saying "near Weston Road and Eglinton - by the Kodak plant." Kodak closed its Toronto plant in 2005, after over 80 years of operation on the site, but telling people where Mount Dennis is will get easier when Metrolinx finishes the first phase of its crosstown Eglinton LRT in 2020 (we hope.) In the meantime there's a lot of work to be done, a lot of people who want to see things done right, and an awfully big hole in the ground just across Black Creek from where Kodak used to stand. 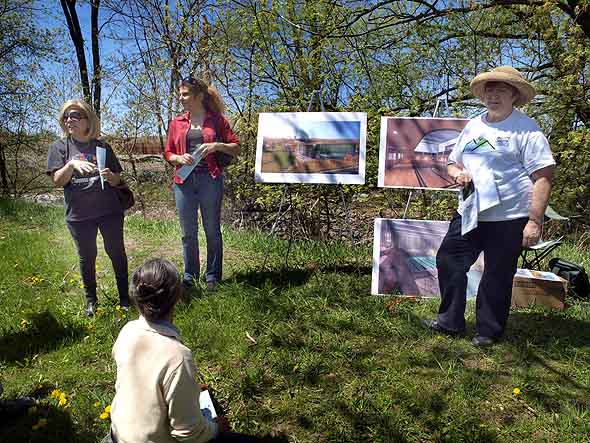 Black Creek was the focus of the first stop on the walk, which began in the parking lot next to Chris Tonks Arena, next to where the Humber River tributary meanders freely before it gets channeled into the concrete sleeve of a flood control ditch that contains it right up till it empties into the Humber.

On the other side of the creek was the other construction site transforming the area - a new community centre scheduled to open in less than two years. The area has been desperate for a community centre at least since I wrote about Mount Dennis almost fifteen years ago for Toronto Life, and it promises to be stunning, at least in the renderings on the website of the centre's architects, Perkins and Will. The long-deferred commencement of construction brought out both Ward 11 councillor Frances Nunziata and York South-Weston MPP Laura Albanese for the walk, both of whom were eager to answer questions and bask in the glow of so much new infrastructure springing to life in an area that has been underserved for so long.

Closer to the banks of Black Creek, Mike Mattos from the Toronto and Region Conservation Authority explained plans for the rehabilitation of the creek, described quaintly in the promo page for the Jane's Walk as "the Humber River's most degraded tributary." He pointed out the nine levels of erosion protection visible from the east side of the creek, built to keep debris and sediment from the community centre construction from choking the waterway. 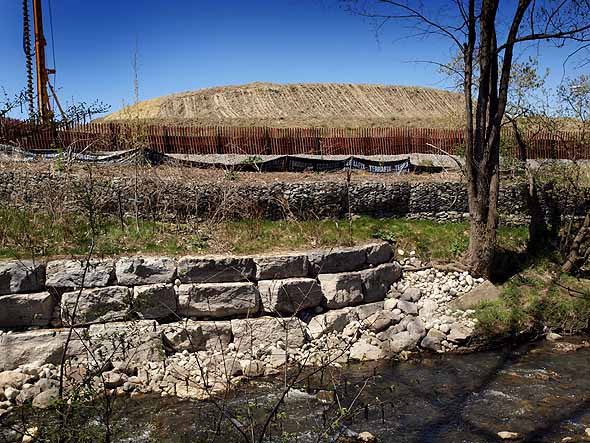 Mattos also said that the TRCA plans to re-naturalize Black Creek all the way to the Humber, which will mean freeing it from the concrete flood control channel that, at least when I photographed it four years ago, was already being reclaimed by nature: 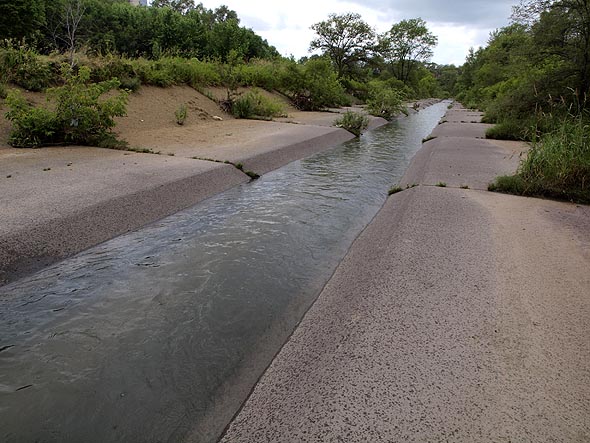 When I was young, Black Creek was still a stark ribbon of concrete running through Mount Dennis, where you'd head to late at night to sit on the sun-warmed concrete slope and stare at the summer sky. I was shocked to see how poorly maintained the channel had become in the last three decades, but in hindsight it's startling how readily we once accepted the expedience of encasing streams, creeks and rivers in concrete, as part of the brute rationale of postwar urban planning and environmental policy. 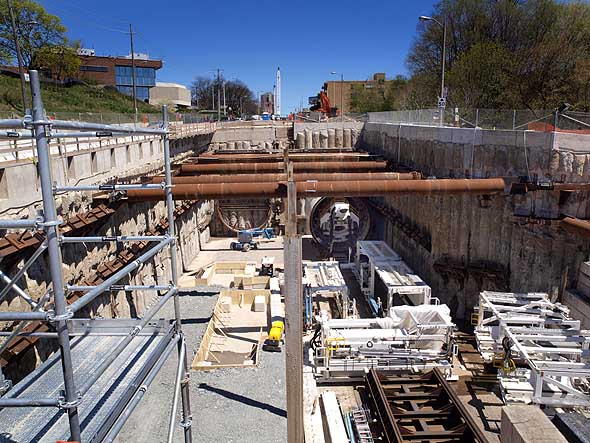 From Black Creek we moved on to the main event - the launch site of the Eglinton Crosstown tunnel boring machines, a huge hole excavated into the middle of Eglinton Avenue, where we could see one machine nearly finished and another in parts all over the adjacent construction yard. A young engineer from the project explained to us how the machines would start their work at the beginning of the summer, starting their eastward journey to Eglinton West station, where they'd be extracted from another hole next to the Allen, then re-inserted underground on the other side of the new station platform, to continue their journey to the Don.

(It's an impressive project - as grand an infrastructure project as we're likely to see in Toronto for at least a generation, in all likelihood, but what he neglected to mention was that the division of Caterpillar that made the tunnel boring machines was scheduled to close next year, with a loss of 330 jobs.) 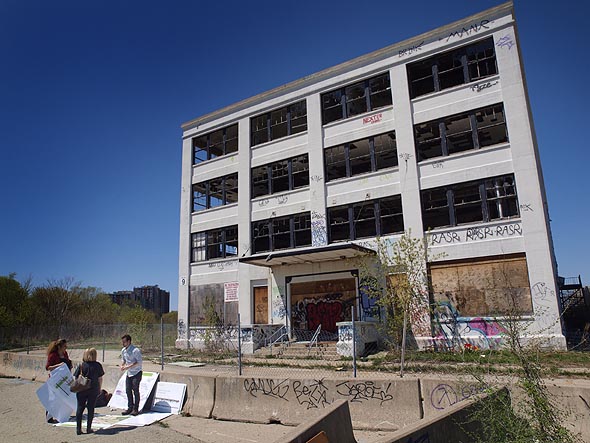 The next stop was Building 9, the old Kodak employees building that's all that remains of the vast American film company's Canadian plant. Sitting at the end of Photography Drive, it's become an unofficial symbol of the neighbourhood - a last remnant of the company that made Mount Dennis and a sad example of the neglect with which it's treated.

A Metrolinx representative gave a presentation on the transit complex that's going to be built on the old Kodak lands - a combination of maintenance yards and garages for the new fleet of LRT trains and a transit hub joining Mount Dennis station with a new GO station. While struggling to keep the wind from blowing away his poster-sized renderings of the future development, he pointed out that Building 9 is to be retained as part of the complex, with its first floor serving as a concourse.

What no one could say was what would happen to the three floors on top of that, currently open to the elements as a result of years of "demolition by neglect" overseen by the site's former owners, Metrus Properties. I asked councillor Nunziata what the city would like to see, but all she could say that there were discussions and meetings still on the schedule to determine the best way to repurpose Building 9 for "community uses." 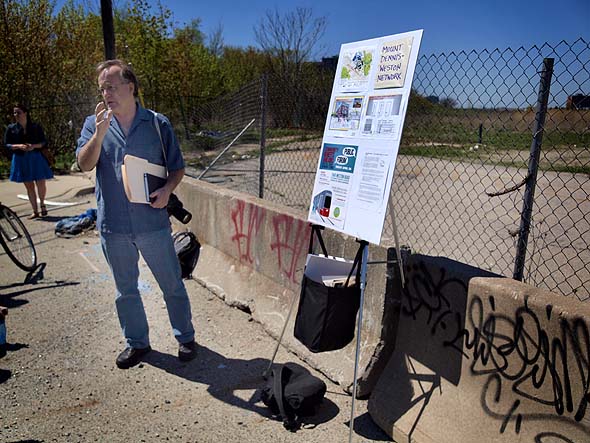 Next up was a representative of that community, who gave us a presentation of what they'd like to see happen to Building 9. Working with Ryerson architecture students, they've produced drawings of a wholly renewed structure, with additional floors added to Building 9, with green space, open atriums and access to adjacent parkland. This is, of course, a mere wish list, and there's no reason at this point to imagine that anyone with the power to say yes - which means Metrolinx and city hall - is behind the Mount Dennis Network's hopes for Building 9.

The second last stop on the walk was on the other side of the railway lines, in front of the Scotiabank that, like its neighbouring daycare centre, is scheduled to be demolished to make way for the GO/TTC complex. Another neighbourhood activist talked about their fond wish to see the building preserved, and I can't see why it can't happen. Lacking a town hall - Unlike Weston to the north, Mount Dennis was never its own municipality - the neighbourhood was always lacking grand civic buildings, which means that the Bank of Nova Scotia building, situated in the most picturesque corner of the intersection that's the heart of Mount Dennis, has always been the closest thing. 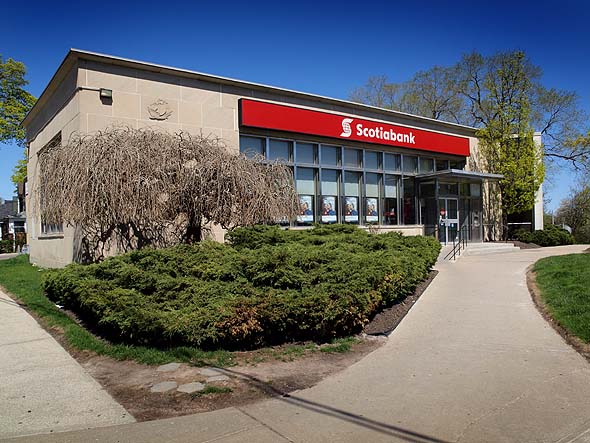 It's a simple but rather lovely example of the solid postwar modernism, rendered in stone more than glass, that you'll still find on University Avenue, and in skyscrapers like the old Imperial Oil building and Scotiabank's old headquarters on the northeast corner of King and Bay. My mother had a bank account there when I was a boy - a legacy of her time working at Kodak - and I still remember its high ceilings and huge windows impressing me far more than the humble little bank branches tucked into strip malls.

The building had a grandeur I could only compare with a train station, and if Metrolinx could be encouraged to incorporate it into its new transit hub, that grandeur could be put to appropriate use. The good news is that, later in the next week, it was announced that city council would be asking Metrolinx for community consultations on redeveloping the Scotiabank building. The bad news is that this is Toronto, and the community in Mount Dennis might find themselves being told to consider themselves lucky that all of this development has finally arrived on their doorstep, and that in the interest of budgets, schedules and expediency, the Bank of Nova Scotia building might be worth sacrificing. I hope I'm wrong.

The final stop on the Mount Dennis Jane's Walk was the lovely new library just recently reopened just south of the Scotiabank building. I'll be writing more about this later, but I couldn't help but remember all the hours I'd spent in the library's predecessor, demolished in the early '80s, and how strange it felt to take a tour of the neighbourhood where I grew up. It was like being a tourist in your own hometown, and while I'm grateful that Mount Dennis is finally seeing the sort of investment that it could have used years ago, I worry that an abiding Toronto tendency to revisit and downscale plans, and pull up short on delivering the full potential of those plans, could leave Mount Dennis disappointed. Again.