The intersection of Queen and Yonge has largely escaped the recent condo boom, thanks in part to the presence of heritage buildings on three of its four corners. However, that could all be about to change if a giant new 65-storey, 220-metre condominium just proposed by Cadillac Fairview makes it through the city's approval process.

If allowed, the historic Philip Jamieson Building with its rounded corner, currently home to sportswear company Atmosphere, would become the base of the new residential tower. The store's 117-year-old heritage protected interior would become the podium for the building known as the "Residences at the Toronto Eaton Centre" in the document currently on file with the city. 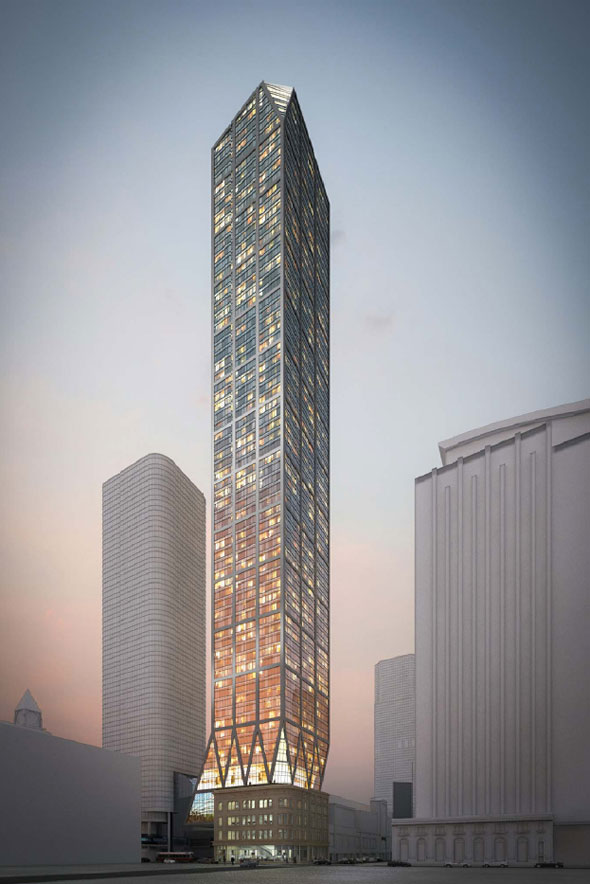 Interestingly, the proposed property is listed as entirely rental at this stage. 80% of the units will be one- and two-bedroom, the remainder of the living spaces will be bachelor accommodation. A total of 580 suites are shown in the plans and diagrams.

Interestingly, the notices up on the street this morning say the development will have zero new car parking spots. 580 bicycle spaces are planned instead.

It's not clear what would happen to the heritage retail space were this to move forward. The early figures say there will be 3,950 square metres of non-residential space, including utilities, mechanical floors, lobbies, and hallways. The prime location at a major downtown intersection makes it unlikely that the store would be repurposed as an entrance hall, however the renderings don't show even a generic company logo over the main entrance.

The Philip Jamieson Building at 2 Queen Street West was built in 1896 to designs by the short-lived architectural partnership of Samuel Curry and Francis S. Baker. The Classically styled, curve-fronted building with its brick, stone and terra cotta trim originally housed a men's fashion store run by Philip Jamieson and was later occupied by a Woolworth's and Tower Records.

For several years the building's entire frontage was hidden behind a white metal curtain.

Big changes appear to be in store for the downtown stretch that's traditionally been retail-only. Massey Tower, just up the street at 197 Yonge, is preparing to break ground and inject hundreds of new property owners into the busy strip between Dundas and Queen stations. Another major residential development could change the flavour of the area even more.

That said, this project is still a long way from becoming a reality. A preliminary city planning report is due in June and a community meeting will likely be scheduled for July. Feedback from that meeting and the thoughts of the planning department will be handed back to Cadillac Fairview for them to take into consideration. A final report, with recommendations, won't be given to council until at least next year.

Also worthy of note is that no vehicular parking spaces are proposed for this development. Bike parking will be provided for all of the units, which makes sense given the location - but the decision to leave out the cars is intriguing.

What do you think of the first renderings for this project? Should Queen and Yonge be a place for people to live as well as shop? Are you concerned about the treatment of the existing heritage building?