Toronto city council will spend $500 million over the next two years building a network of separated bike lanes that will criss-cross the city, connecting the disjointed parts of the city's existing cycling network. The major construction project, which has been percolating in secret for over a year, will include free tire pumping stations and a number of parking corrals at busy downtown locations.

On major roads, the lanes will be separated from vehicular traffic by a raised bed of planters or, in some cases, a rubber hump. Activists who have long campaigned for better protection for cyclists on roads like Bloor St., Danforth Ave., and Yonge St., and Queen St. will be pleased: all are included in the program.

"It's about redressing the balance, encouraging people to take up cycling, and protecting those who already bike to get to work," says Avril Tromper from the city's cycling division. "Yonge Street is a good example of where foot traffic can often outnumber road traffic ... adding bike lanes and widening the sidewalk makes sense." 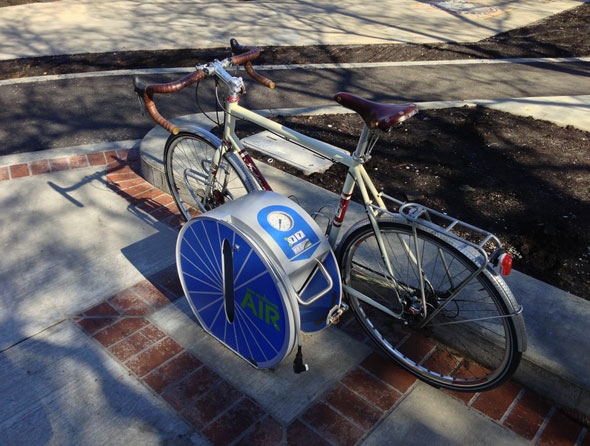 The cost of the gigantic infrastructure project will be funded in part by the province and an untried sponsorship scheme. For a fee, companies will be allowed to print adverts or public messages on the road surface. It's thought gaming corporations interested in opening a Toronto casino and other groups wanting to drive home their corporate message will be first to buy space. Naming rights on the city cycling map are also up for grabs.

Toronto has needed a viable east-west bike lane for some time. Under the plans released today it will get two: Bloor/Danforth and Queen. Where two of the "bicycle highways" meet - at Yonge and Queen for example - a special European-style roundabout will help cyclists move through the intersection in both directions at the same time during a new "bike only" phase of the traffic lights.

What? Come on! You lose. This is Toronto. We don't do shit like this.