How to remove a bike that's locked to your frame

Cycle around in Toronto long enough, and you're likely to have some muppet lock his bike to yours either by accident or because he just couldn't be bothered to find a spot for himself. Few things are more annoying than strolling back to one's bike to encounter this sight. But what exactly do you do? I suspect most of us angrily wait for the perpetrator to return so that we 1) have the opportunity to express our annoyance and 2) don't have to come up with some DIY method to remove your bike.

That, however, is not the strategy adopted by all who have suffered this cruel fate. A reader recently shared with us the story of how a friend of his solved the problem. After taking in a flick at the Scotiabank Theatre, Jon Salvatore returned to find another bike locked to his. Here's what happened next:

"I was a little pissed to say the least. I left a note in the lock kindly asking the owner to call me when they were kind enough to unlo k my bike then walked home. On Monday after work I drove by hoping that they had been too nervous to call me or the note was gone, but I was still locked up.

I then went to my friend's bike shop for advice, thinking perhaps there was a legal way to deal with this. They suggested I cut the lock. I decided to give the person another day. On Tuesday some friends told me of scams where people stole bikes this way, which made me a little stressed so I called the police. I was informed that they could not recommend me cutting the lock, 'but if that is the thought you have, you should do it.' I then asked what I should do with the extra bike. 'Leave it on the street," they replied.

So I acquired an industrial angle grinder and a power cord, convinced a 16 year old working at the theatre that it was perfectly normal for me to walk in and use their power outlet in order to cut a bike lock at 5:30pm on a Tuesday."

Perhaps unsurprisingly a few people passing by inquired as to what Salvatore was up to. When informed of the situation, he reports that "most cursed the other biker." So, that brings me to the question, what is the best way to deal with this most unfortunate of situations. It seems to me that Salvatore was fair to leave a note and wait a few days. If you lock your bike up to someone else's, can you complain if he takes such action? 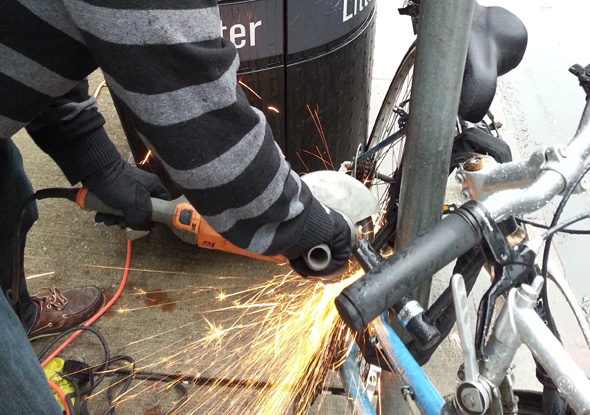 Weigh in with your opinion in the comments.