The majestic Dineen Building at Yonge and Temperance is experiencing a rebirth in the form of an influx of new tenants, the most special of which might be us (kidding, kidding...we moved our office space here in January). Built in 1897, 140 Yonge / 2 Temperance once housed W. and F. Dineen Co., a producer of hats and furs. The last 116 years have seen the building go through a series of metamorphoses. 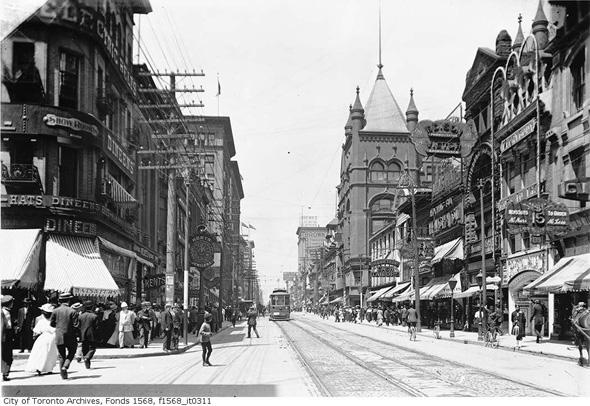 In the 1990s, Dineen was home base to what legend has it was a formidable gang of bicycle messengers. Allegedly, they used to stand outside and smoke doobs. Before its restoration, Dineen was a bit of a mess. It was home to squatters and in relative disrepair, with mattresses on the floor and plaster peeling from the walls. 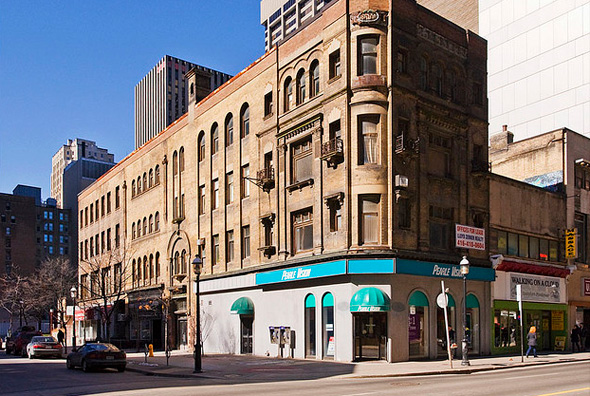 Now, the building will continue to wear many hats. An over-arching redevelopment is lifting the building out of its disparaged state and into a workspace/gastro destination. And, in the hands of heritage-friendly developer Clayton Smith, the property's historical integrity will be maintained. Essentially, the list of new tenants means we at blogTO will never have to leave the office.

And the building's new tenants are:

The Chase
The Chase restaurant will be perched on top of the building, which will make for great views of downtown from their rooftop patio. The building's elevators will deliver patrons straight into the restaurant from the bottom floors. The fifth floor location will have a focus on wines, and, like their fish and oyster counterpart, they plan to open by June, just in time for patio season.

Dineen Coffee
The construction of this new coffee shop, which will face Yonge St., is already well underway. In fact, they plan to open by May 1st. The Dineen location will be the first of a series of shops under the same ownership. And, according to those in the know, the coffee shop will boast "the most expensive coffee machine you can buy." I'm skeptical, of course, but this is all the more reason to pop in and judge for myself.

Fiore
Fiore was created by Sam Fiore, who is also the executive chef at One King West and an incredibly nice guy. Fiore opened his first-floor restaurant before the redevelopment began, and he just re-opened last month. For him, the charm of the area was a major draw.

"It's a mix of corporate culture, but then you have a building like Dineen, which I would classify as old Toronto, or even as a quaint Old Quebec feel." Fiore is looking to cater to those who work in the area, serving creative but speedy sandwiches and pasta (and drinks) to the lunch and post-work crowd. 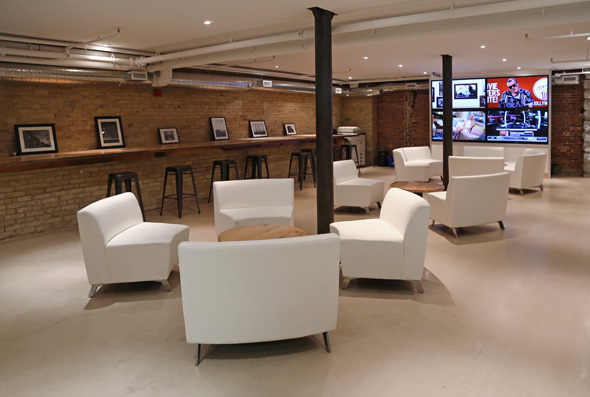 iQ Office suites
iQ Office provides a shared workspace for creative types, IT people, and a fascinating rainbow of others. There are private offices and dedicated desks available across three floors. This is where we're currently located and we love it. We have a nice fully enclosed, sound-proof space with modern desks and chairs and we share kitchen, reception, boardroom, showers, bike-lockers and a kick-ass lounge with fellow IQ office tenants. 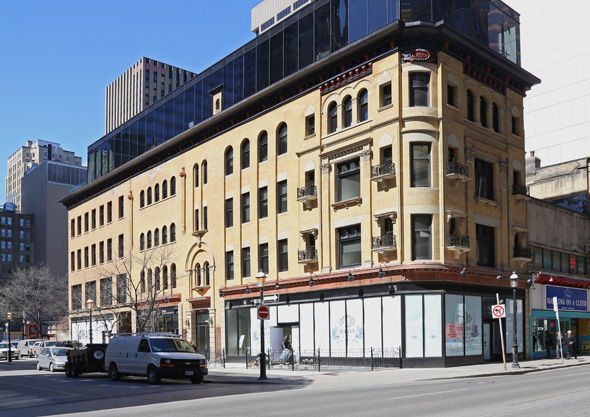 What's next for Temperance?

The Dineen building isn't the only aspect of the street that's changing. People in hardhats and various giant yellow machines are common sights in the area. It seems there's always room for more development, and right across the street there's the constant construction of Bay Adelaide Centre East. In Fiore's view, of course, it's the more, the merrier. He likes the vibrant mix of old and new, and he feels Temperance St. will only get better with time.

"It's corporate, but it's also old, and very quaint, with the patios and food and beverages." He says the history 2 Temperance holds keeps things in balance, in a sense.

"I'm really in love with the building, which is why I chose to re-open here."