This could have been "New" City Hall in Toronto

If the outcome of a single public vote had been different, the Imperial Oil building on St. Clair Avenue (now in the midst of being converted into condos) would be standing at the top of Nathan Phillips Square instead. Before city council conceived the design competition that produced New City Hall, Toronto toyed with an alternative proposal by a committee of architects for their newly-acquired space at Queen and Bay, recently leveled into a surface parking lot.

Three local firms - Marani & Morris, Mathers & Haldenby, and Shore & Moffat - worked together to produce a proposal for a new civic square, council chamber, and office tower that the group submitted to city council in 1955.

Toronto mayor Nathan Phillips put the blueprint and cost of building a new City Hall to the electorate in a referendum in December 1955. Perhaps fortunately, the people said no dice, and the project went back to the drawing board. A year later council endorsed holding a design competition for the new civic building - Phillips' original plan - which won public support. 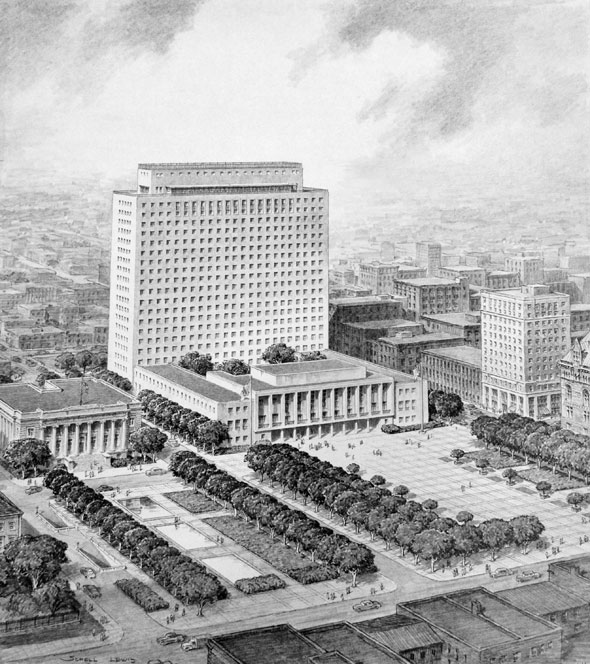 The original plan for the new city hall, though decidedly less ambitious than the structure Toronto eventually acquired, did have nice touches. The long lost Registry Building was to be retained and incorporated into the large Queen Street plaza. The south facing facade of the new council chamber, shown above, matched the older structure's giant ionic columns.

An enclosed square between the council chamber and office tower included trees, an area in which Nathan Phillips Square lacks today, and at the corner of Queen and Bay designers imagined 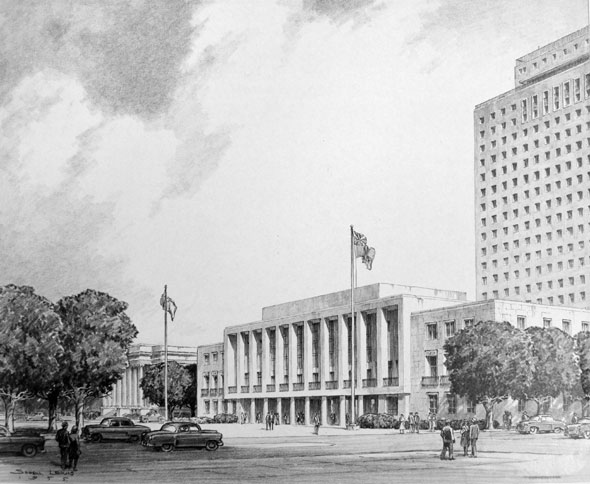 an entrance to the then-proposed Queen subway, a rival transit plan to the Bloor-Danforth line that was never fully realized.Its rejection by voters didn't mean the original "20-storey, office-style" building went unbuilt, though. The architects sold the design to Imperial Oil - now Canada's second largest energy company - who sliced off the council chamber and enclosed square and tweaked the floor plan for their new headquarters at 111 St. Clair Avenue.

While purchasing the properties it would need to clear to make way for its new office, Imperial Oil ran into problems with local residents, including the redoubtable Mrs. Isabel Massie of Foxbar Road. Massie refused to sell her property to make way for the back parking lot, a move that forced the company to shift the entire tower closer to the street.

Massie's land poked into the oil giant's concrete backyard until she died in the 1960s. Her family later caved and sold the land for $700,000 when Imperial Oil upgraded and expanded the parking lot.

To address noise concerns from owners of the remaining nearby homes, the metal skeleton of the structure was entirely welded together. Upon completion, the Imperial Oil Building was the largest steel-framed structure to completely forego rivets. 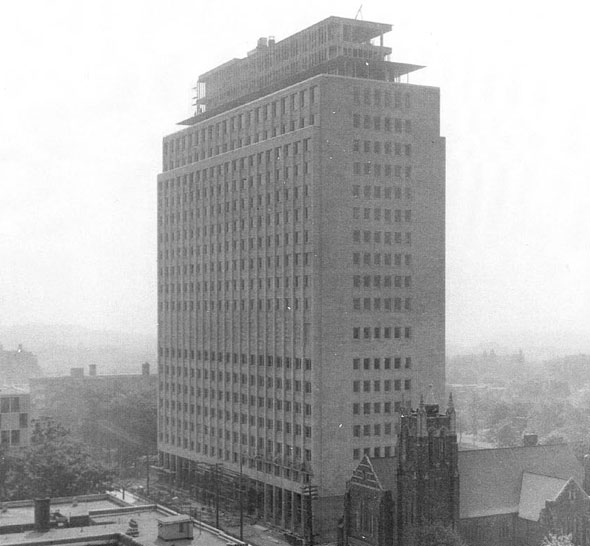 The Imperial Oil building was finished with minor exterior modifications in 1957 and converted to condos when the company moved its offices to Calgary in 2011. BlogTO's Rick McGinnis took a look around the building before the refitters arrived. Do you think Toronto came up roses with its current city hall? 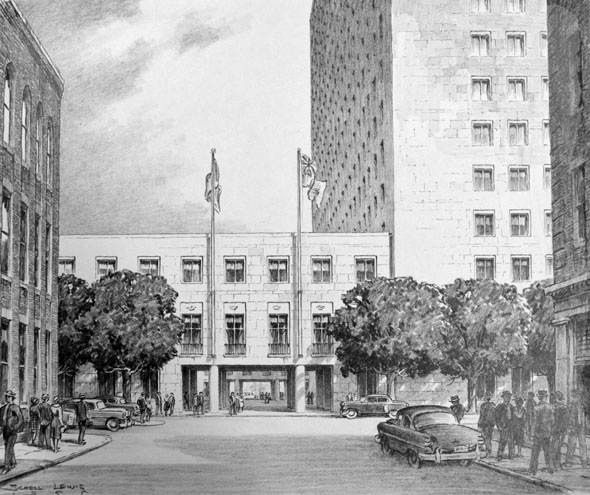 Looking south from within the enclosed square 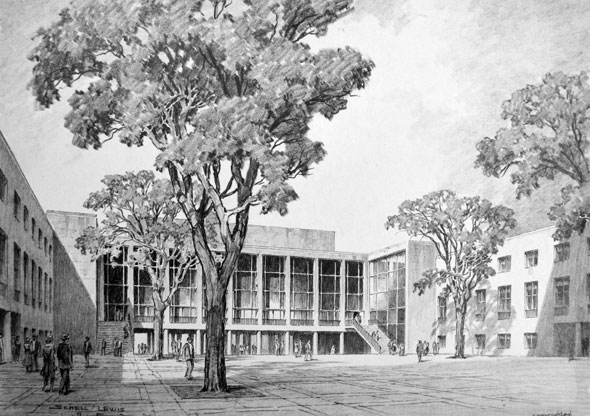 The view north from Queen Street 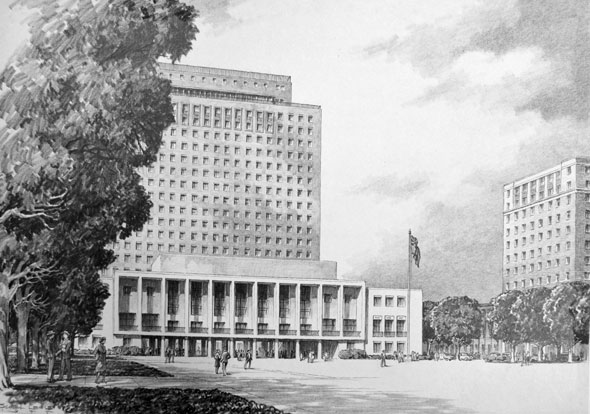 The original blueprint showing the civic square and towers 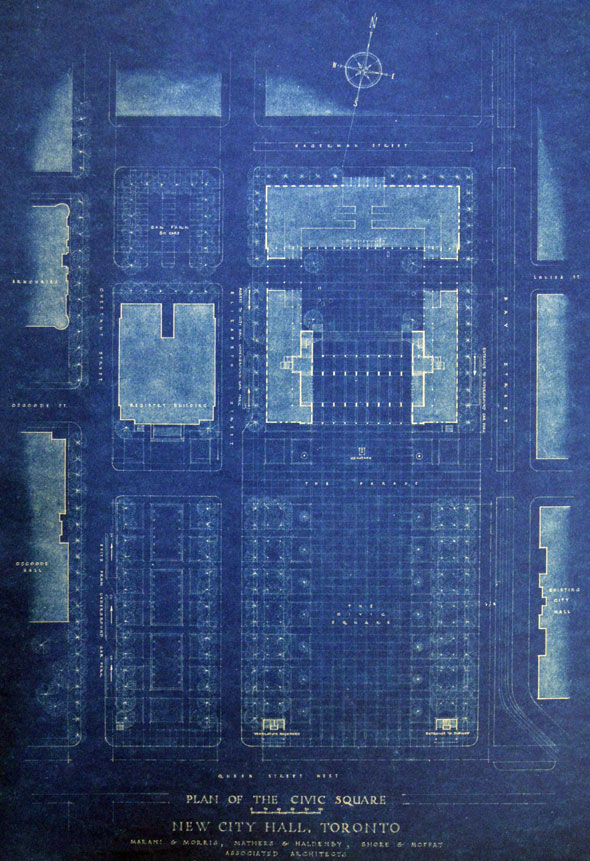 Image: "Imperial Oil Building (Or It Was)" by sssteve.o/Creative Commons.