The controversial bus shelters, garbage cans, newspaper boxes, and ad pillars have drawn the ire of Torontonians in the past for perceived ad creep and intrusion on public space. Last summer several of the company's ad holders were hacked by a group of activists amongst other interventions we've reported on in the past.

"I guess you could characterize that group as a vocal minority, and an effectively organized minority," Hutchinson says. "Just remember the program is 26,000 pieces of furniture on the streets of Toronto over a 20 year period, not less than 100 info pillars, that were, by the way, part of the RFP [Request For Proposal by the city] - not something we invented."

"I would contend maybe don't understand the program - it's a fantastic deal for the city because they generate $900 million ... there's 46% less advertising on the streets of Toronto now."

The Coordinated Street Furniture Program turns five years old this month. In a survey commissioned by Astral Out-of-Home, the division responsible for the design, installation, and maintenance of the products, Leger Marketing found 96% of Torontonians believe the items contribute to the functionality of the streets.

"I think what it says is the majority of people see benefit in the program, and like it," Hutchinson says.

Is that undoubtedly the case? The belief that the items "contribute to the functionality of the streets" doesn't necessarily infer that one sees the program as beneficial. And therein lies the (potential) problem with the promotion of this survey. What's missing is a list of the questions that gave the results. We can't really know whether or not those surveyed like Astral's furniture, just that they see the benefits of having a place to stand while waiting for transit and a place beside the sidewalk to put trash. Hardly a glowing endorsement.

The survey also purports to show strong support for the new design of garbage cans, benches, and bus and streetcar shelters among the 539 people asked. The previous models - which were particularly battered and joyless - are shown above. It's probably not hard, then, to convince people the new, shiny designs are better.

The number of info pillars planned for the city is also being scaled back from 120 to 85 over negative feedback and new, tighter installation guidelines. Fixes for defective garbage cans with broken foot pedals and jammed opening mechanisms are also appearing in high-traffic areas of the city, Hutchinson says. The cost of that retrofit, footed entirely by Astral, is $350,000.

Astral also recently decided to strictly limit the number of new open-sided waiting areas due to complaints over lack of protection from the weather. 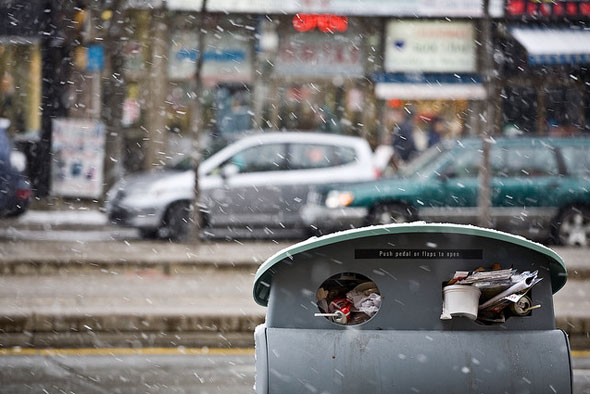 Delays keeping up with the installation schedule agreed between Astral and the city, another source of friction for observers of the program, are reportedly tied to design tweaks and staff shortages at city hall. A few months ago the company reported it was 87% on track with its revised roll-out plans.

"[Deployment] was interrupted by the garbage strike and disputes over a couple of things," Hutchinson admits. "Everything we do needs to be surveyed, needs a permit, needs a process so the redeployment of managers slowed down that process. I think the city is satisfied the reasons for the slight delay are design related. I don't think they're upset about it."

How do you feel about the quality of street furniture in Toronto? Are you surprised at the reported high level of support among those surveyed?

Image: "The Androids are Among Us" by AshtonPal and "Return of the Garbage Can" by Neil Ta and City of Toronto/blogTO Flickr pool.