The SkyWalk could come crashing to the ground

Union Station's arching SkyWalk, that most photogenic of Toronto's urban landmarks, could be on the chopping block if the city's preservation board adopts a report recommending its demolition at next week's meeting.

Revised construction plans from Allied REIT, the SkyWalk's owner, to enclose the downtown terminus of Metrolinx's Union-Pearson Express call for the removal of a large part of the curved glass arcade parallel to Station Street by summer at the latest. A small remaining section closer to to Simcoe Street could be later be gobbled up by the podium for a separate office tower project. 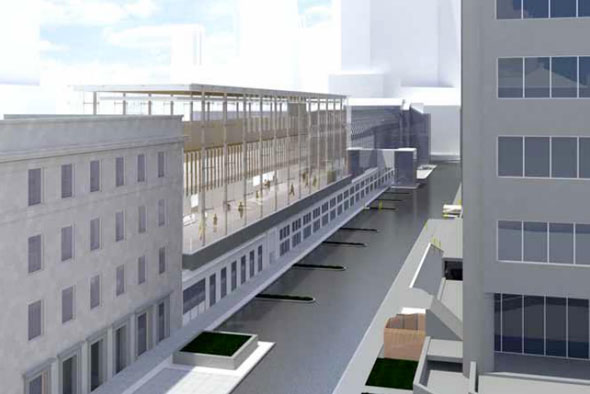 Finished in 1989, the SkyWalk was built to connect Union Station with the SkyDome and reduce the need for additional parking spaces near the ballpark by providing a direct link to TTC and GO trains. The post-modern curved metal and glass structure was the first major construction project in the railway lands after the CN Tower.

If the area around the station is built to the new, revised plan the route itself from Union to the ballpark and convention centre, which forms part of the PATH network, will be retained inside the a new, square-roofed structure. The bridge crossing the railway tracks will be unaffected. 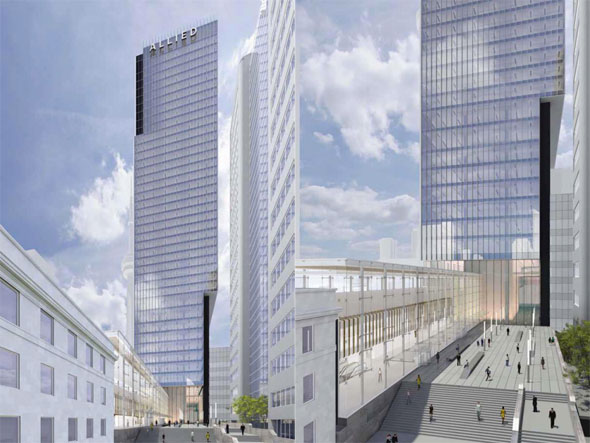 According to digital designs released with the report, Station Street, named for its former location in front of Old Union Station, will be closed off at one end and turned into an pedestrian plaza if the tower project begins as currently planned.

The SkyWalk itself forms part of the Union Station Heritage Conservation District. Though the city says in a report it would have preferred to keep the existing arcade, it cites "construction scheduling and programmatic requirements" as the reason for the design shift, suggesting pressures of Metrolinx's pledge to complete the project in time for the 2015 Pan Am Games are at play.

Allison Meistrich, a city of Toronto planner, insists that's not the case. "It is our understanding that the ARL station fit better (fewer grade changes, etc.) in a reconstructed SkyWalk connection. The ARL is to be running in time for the Pan Am Games and those timing issues will affect the project phasing, construction, etc., but is not a factor in the design change regarding the SkyWalk."

A 2007 report recommended demolishing only the west end of the SkyWalk and keeping the section closest to Union intact. Text on the Union-Pearson Express website describes the new station sitting within the existing structure but that design has since been altered.

The report, if adopted, will have to clear city council before demolition can proceed.

What are your thoughts? Is the SkyWalk a fair price to pay for a decent rail link to the airport or should Metrolinx have found a way to stick to its existing plans? 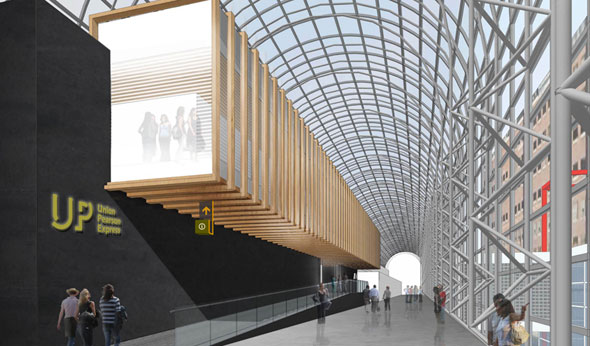 The owners of the SkyWalk, Allied REIT, have withdrawn their application to demolish the eastern portion of the curved glass roof, the section closes to Union Station, for "a variety of reasons." The Union-Pearson Express station, which was unaffected by Allied's proposed design change, will now stay inside the existing glass roof as originally illustrated on the project website.

The demolition of the western portion, which is part of a separate application, is unaffected by today's decision and could still go ahead depending on what Allied decides in the coming months.

Is this a win for SkyWalk fans or could the space have used a new design? Are you happy that most of the SkyWalk roof will remain?

Images: "The Skywalk at Night" by Ben Roffelsen/blogTO Flickr pool and City of Toronto.