That time when Yeti attacked Toronto

The Dino De Laurentiis stink bomb remake of King Kong (1976) cratered out with poor reviews, insipid box-office returns, a broken robot monkey, and Jeff Bridges status as a Hollywood player in serious doubt. More bizarrely, it also inspired New York's Twin Towers to become a magnet for kaijĂÂŤ eiga, Chinese kung-fu stalwarts Shaw Brothers oddity The Mighty Peking Man (1977), and to date the only monster movie to be set in downtown Toronto - Yeti, the Giant of the 20th Century (1977).

After a "million-year-old" gigantic Yeti is discovered frozen in the icy wastelands of Northern Canada, greedy industrialist Morgan Hunnicut decides to exploit the beast as a mascot for his chain of grocery stores and gas stations by airlifting it to the top of a hotel in Toronto. But after falling in love with Hunnicut's beautiful granddaughter Jane, Yeti is woe to become a Ju-Ju for capitalism and breaks free of his oppressors. Running amok in Toronto, Yeti is caught between the hardball business machinations of Hunnicut's rivals who also wish to exploit him, and the Toronto Police department, who have been instructed to shoot him on site. Can Yeti get the girl and return to his peaceful sleep in the ice?

Directed by Italian cult cinema maestro Gianfranco Parolini under the pseudonym Frank Kramer, Yeti is a bruising, berserk, almost unwatchable catalogue of inanity. At once, a Family friendly mash-up of King Kong, The Golem and Lassie, backed by the most unconvincing green screen work ever committed to film, and a totally inappropriate soundtrack that veers from half decent funk in the title track "Yeti" by The Yetians (see what they did there?), to a low-rent version of "O Fortuna" (Carmina Burana) which seems to pop up every 10 minutes or so to add a sense of drama. Never mind the fact that Yeti looks like a filthy, smelly hippy.

Heaven only knows what Parolini was under the influence of while directing this, as his career up until that point was chock full of bad-ass Lee Van Cleef revenge movies like God's Gun and the Sabata trilogy, the kind of hard-boiled spaghetti westerns Quentin Tarantino riffed on in Django Unchained. Heaven also only knows how or why Toronto was selected as a back drop for this blessed madness, especially since other than a few establishing shots, the CN Tower is virtually ignored. One would assume the Tower might have been used for an exciting grand finale a la the Empire State Building in the original King Kong (1933), but no, the closest we get to anything like that is the Yeti skulking around City Hall.

Yeti's T-dot tour also includes the Sheraton Centre, Exhibition Stadium (where a gaggle of Jays fans holler at the announcement that Yeti is en route), the CNE Food Court and stationary Alpine Way, the Bank of Montreal building, and a host of others. As is usually the case, Toronto's geography is pretty messed up in the film's diagetic universe (from City Hall to Ex Stadium in a few moments; see also The New Avengers in Toronto. 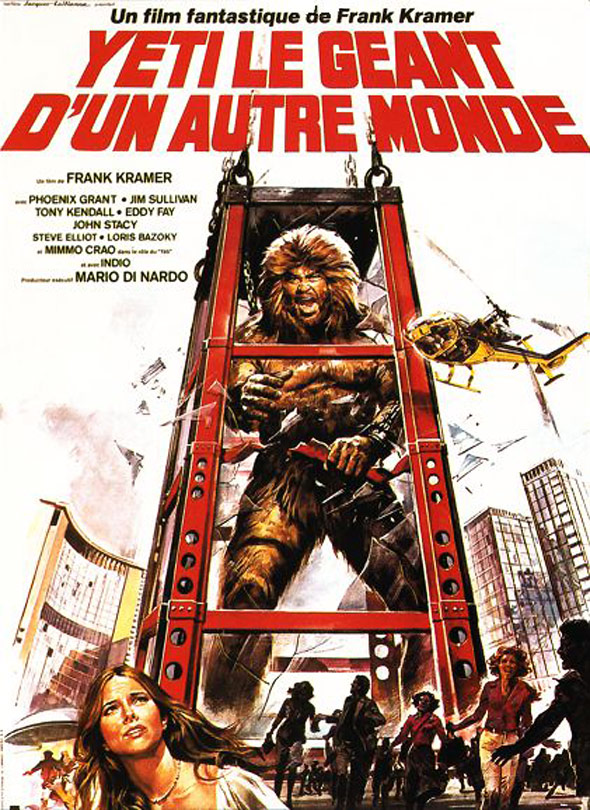 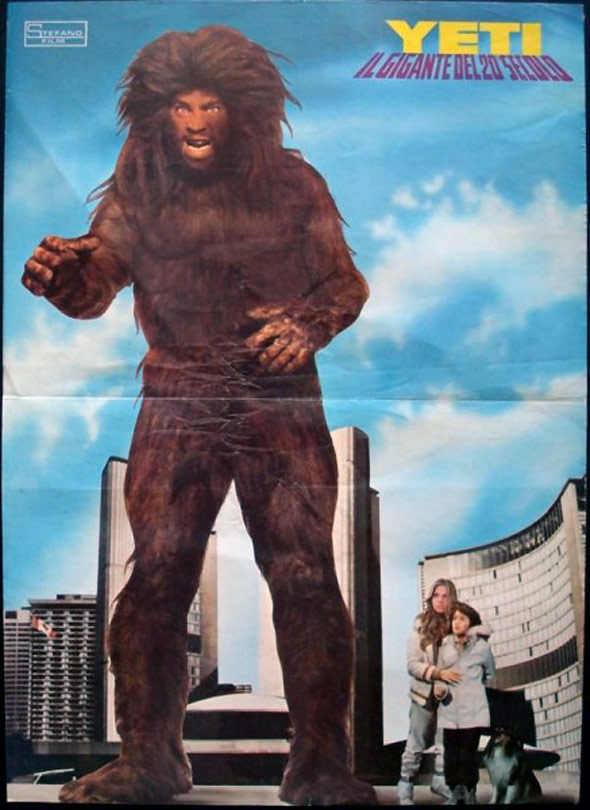 City Hall appeared prominently in most of the movie's print advertising, probably because of its science-fiction-y look, courtesy of Finnish architect Viljo Revell, and probably why it featured twice in Star Trek, which all things considered is high art compared to the lowly Yeti.

Yeti remains a "lost" film, with nary a 30-year-old no-name label VHS release to its sullen name. Italian Antonella Interlenghi's dreamy green-eyed gaze is about the best thing the movie has going for it, although her pronunciation of Yeti ("Yheeeti") is suspect, as are the awkward moments when Yeti makes bedroom eyes at her. She falls for him when after eating a fish he uses its dry bones to comb her hair. Who would have guessed Yeti was such a mack?

So the ultimate Toronto giant monster movie remains to be made. This summer's hotly tipped Pacific Rim was shot here, but it's doubtful that any of our major landmarks will be getting attacked on screen. And whatever happened to Yeti? Legend has it he occasionally revisits his old City Hall haunt.